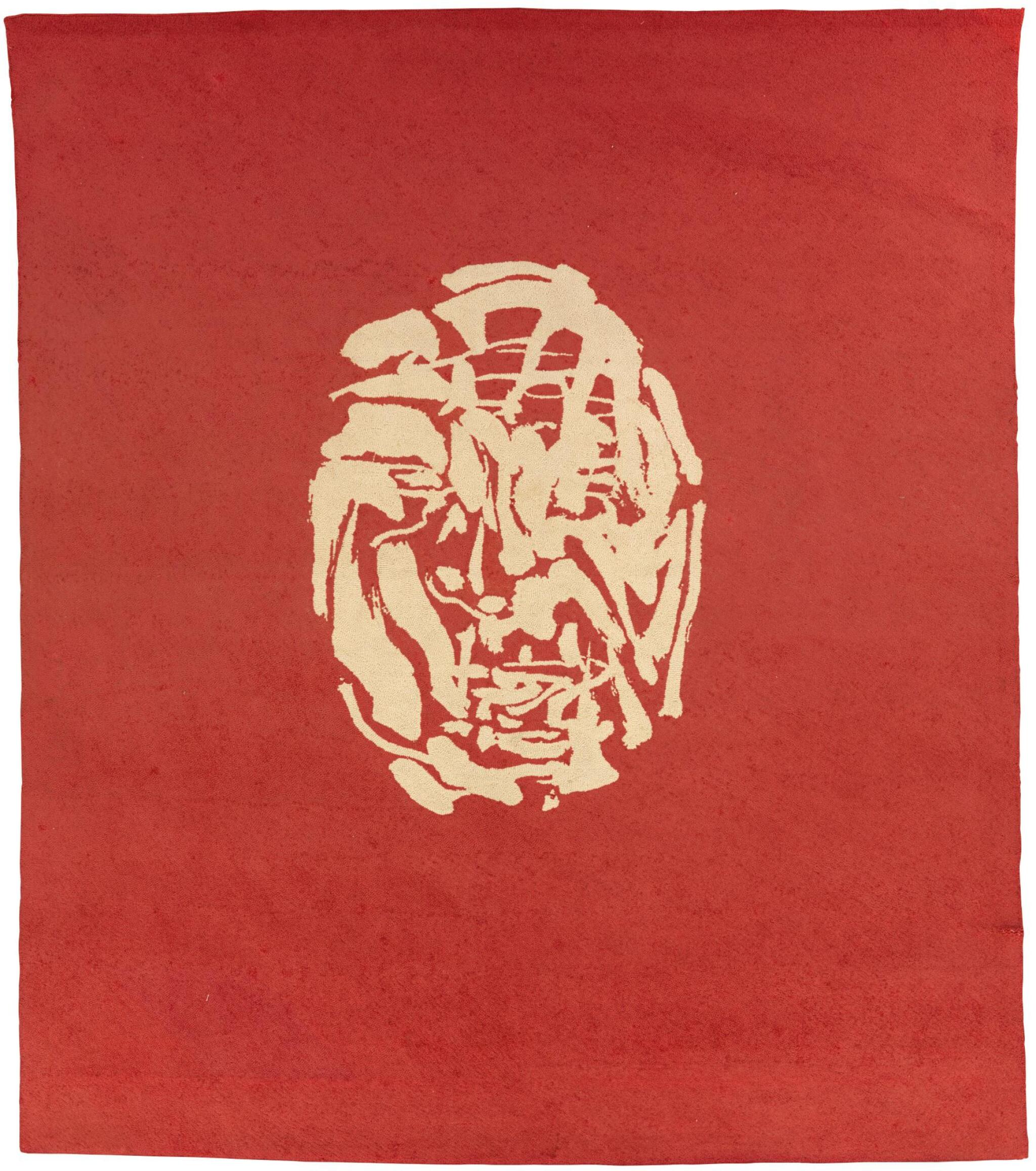 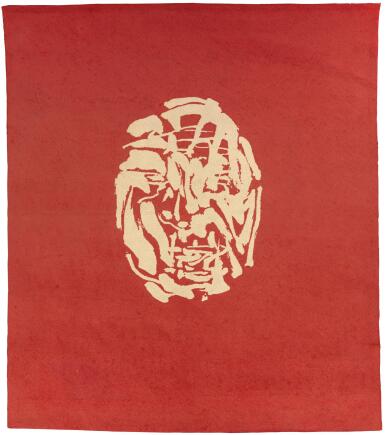 Condition overall very good. Carpet has been hanging probably since made, so no visible wear to pile, which is gunned in irregular loops giving an attractive movement to the surface. Pile is slightly faded generally overall, slightly darker in upper 18 inches, and with the right hand corner, about 15 cm along each edge, possibly re-piled in a triangular shape. Glued backing, this may be contemporary with manufacture, with a handful of cracks along both vertical edges, the longest approximately 2cm. Hanging rod on reverse with 5 heavy duty brass hooks screwed to it at upper edge, this could be removed to enable carpet to be used on floor. Carpet would probably benefit from a light clean and some attention to the breaks at edges. It is an attractive rosy red colour with a stong central motif and a shimmering surface owing to the intentional irregular looping.

Commissioned from the artist in 1966 for RTÉ Television Programmes Building, Dublin

Ronald Tallon of the Dublin-based architect firm Scott, Tallon and Walker was instrumental in the commission of Louis le Brocquy’s Táin. He put forward a proposal to RTÉ in 1966 to have works commissioned by Irish artists for the new buildings at Montrose, Donybrook, Dublin, which in addition to le Brocquy, included Michael Farrell, Patrick Scott and William Scott (see Abstract Painting, to be sold in our Modern & Post-War British Art auction, 19 November 2019). The impressive scale of the works was dictated by Tallon with clear instructions: 'Height: not less than 5’0” and not more than 6’6”. Width: units of 2’6” not less than 5’0” overall.'

The present work employs a laborious handwoven technique of looped wool, which gives the work a shimmering and dynamic surface. Against the deep red background is the mysterious, fragmented head of the invincible warrior, Cúchulainn - Celtic hero of Táin Bó Cúailnge. The grand scale of the piece, as dictated by Tallon, is entirely befitting of such an epic story. A tale of a cattle raid and heroic pride, of warrior culture rubbing up against the supernatural, unflinching in its telling of violence and the raw physicality of the human body, the Táin Bó Cúailnge has been called the Irish Iliad for its status as the epic centre-piece of the eighth-century Ulster Cycle of mythological sagas.

The present lot holds a unique position among le Brocquy’s celebrated treatments of the Táin, having no other works directly related to it. It was le Brocquy's first attempt at the subject, prior to the calligraphic brush drawings which he also worked into lithographic prints to accompany Thomas Kinsella’s modernist translation for the landmark Dolmen Press Edition of the Táin, published in September 1969. This in turn led to le Brocquy's black and white Táin tapestries from 1969 and the coloured Cúchulainn tapestries produced from 1973 onwards.

Le Brocquy's interpretation of the Táin is wholly original. He has not resorted to the clichéd pseudo-medieval costumes of previous attempts to illustrate the poem but to primitive, pre-Christian imagery. The use of a mask-like head coincided with le Brocquy’s encounter two years earlier of ancient, Polynesian heads at an exhibition at the Louvre in Paris. This led to his Ancestral Head series of the mid-1960s and his occupation with Celtic head culture: 'Like the Celts I tend to regard the head as this magic box containing the spirit. Enter that box, enter behind the billowing curtain of the face, and you have the whole landscape of the spirit'. (Michael Peppiatt, 'Interview with Louis le Brocquy', Art International, Vol. XXIII/7, October 1979).

The present work embodies this principle. Simultaneously, Le Brocquy's aim with his Ancestral Head series was to rediscover the earliest manifestation of art in Ireland. Choosing the Tain as his subject thereby allowed him to marry Celtic word with Celtic imagery and in doing so, re-centre Celtic tradition at the heart of Irish culture.