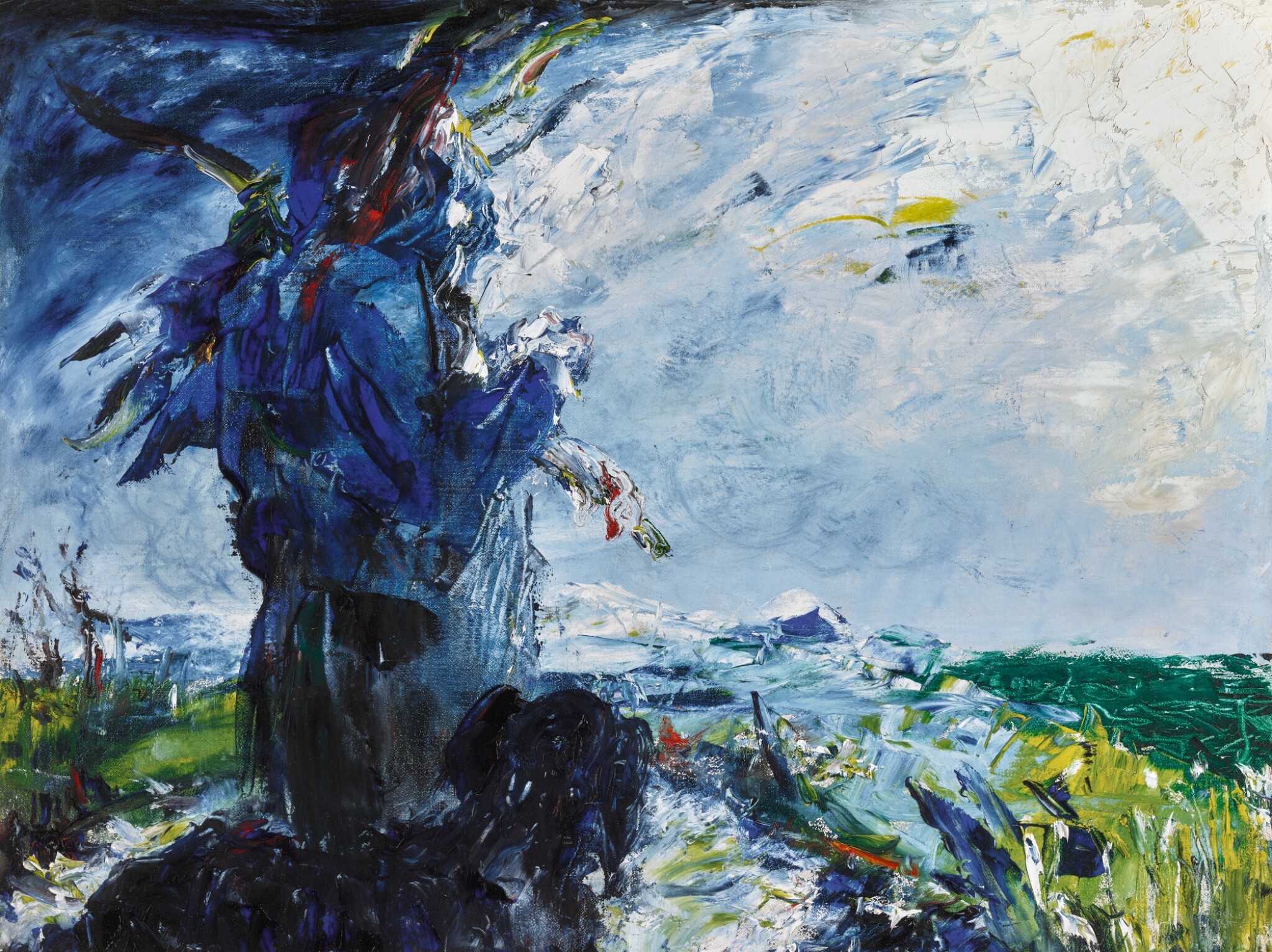 THE MAN IN THE MOON HAS PATIENCE

signed l.r.: JACK B/ YEATS; titled on the reverse and further titled, signed and inscribed with the artist's address on an old label attached to the stretcher

Original canvas. A couple of minor hairline cracks in the upper right corner and some craquelure and signs of lifting paint in the green of the sea lower right corner. Also small area of lifting paint by wait of the figure. This excepting, the work appears in good original condition with strong passages of impasto.

Held in its original frame under glass; unexamined out of frame.

Purchased by Philip Pearce at the 1943 exhibition, thence by descent to the present owner

In an expansive landscape, perhaps the Skelligs or Killary Harbour in the West, a traveller wearing a broad-rimmed hat pauses to look up at the moon which lights up the night sky and deep green sea before him. Often in Yeats’ work, the traveller is alone, yet here he has a dog for company and the two make their way along the coast side by side.

It is quite possible the figure in the present work is a self-portrait of Yeats as a young man. His likeness flits in and out of his work; in the 1940s a tall ascetic figure exploring the former scenes of his youth appears in such works as A Banquet Hall Deserted (1943, private collection) or Where Fresh Water Meets Salt Water (1947, private collection). Memory is a central tenet throughout Yeats’ oeuvre; he was in his seventies when a recollection from his youth inspired the present work. Once Yeats began painting, the memory would then expand, leading to hitherto unanticipated endings. In this way Yeats’ work balanced reality and imagination – the imagination heightened through Yeats’ liberated brushwork and expressive use of colour.

How Yeats wanted one to interpret his pictures he deliberately left open-ended. He was a complete individualist in his painting, and by the same token expected the viewer to arrive at their own conclusion. Yeats identified strongly with the outsider in his art – the traveller being a key character. Far more inclined was Yeats to the homeless wanderer within nature than a town-dweller. Is The Man in the Moon has Patience Yeats reflecting upon his own journey and acknowledging the ever-presence of the moon, which has been both guiding and observing him on his journey? There is a sense of resolution in the title, hinting that the moon’s patience has been rewarded.

The moon appears in another seminal work by Yeats from the 1940s, Harvest Moon (1946, Smurfit Collection). This takes the allegory further by presenting another identifiable Yeats figure taking inspiration from the moon while his alter-ego in the shape of another figure is seen slipping away. Hilary Pyle points out, ‘Yeats’ occasional references in his paintings to masks and the moon imply that he had accepted in part the ideas put forward by his brother, W. B. Yeats, in A Vision; but he always maintained an independent imagery’ (Jack B. Yeats, A Catalogue Raisonné of the Oil Paintings, Vol.II, p.718).

The present work makes its first appearance at auction having been bought directly by Philip Pearce the year it was painted and subsequently passed to his son, the present owner, glassware designer Simon Pearce. See lot 69 for another Jack. B Yeats from the Pearce Collection.