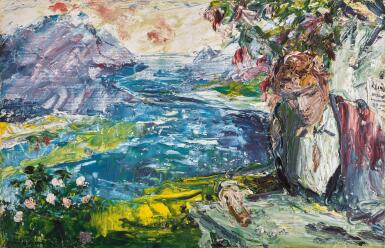 Property from the Collection of Simon Pearce

Property from the Collection of Simon Pearce

signed l.l.: JACK B YEATS; titled on the reverse

The panel appears sound and stable. The work is in very good original condition with a rich impastoed surface. There is possibly some material residue to a raise area of impasto on the figure's right shoulder.

Held in a plaster frame under glass; unexamined out of frame.

Munster Fine Art Club, Cork, 1942, where purchased by Philip Pearce and thence by descent to the present owner

‘A desperate young man, his shirt gaping, leans over a table, having thrown the bones, or dice, which in their name alone forecast his future. The landscape in which he casts the fatal dice presents a setting of intense beauty in direct contrast to his ravaged mood: a blossoming tree spreads over his head, while to the left a winding river in the valley below flows to the sea’ (H. Pyle, op. cit., p.445)

The Bones is a classic Yeats subject. A narrative fantasy, tales of fortune and fate strongly captured the artist’s imagination. Individual characters faced with dire consequences appear regularly in his work, often drawn from his reading of 19th century melodrama. Comparisons with the present painting can be made with other works by Yeats such as The Avenger (1938, private collection) in which a man is forced by a military commander to sign a document. Behind him is a vignette of a firing squad posed in front of a hostage. Another example is Maria Gunning and the Killing Card  (1942, private collection). Maria Gunning was a celebrated Irish beauty who made her debutante in London in 1751. She married but died eight years later, purportedly through excessive use of cosmetic white lead. According to legend she foresaw her death and used to cut a pack of playing cards every night, knowing that when she turned up the Knave of Diamonds she would die. In Yeats' painting she is depicted holding the card that commands her fate, just as in the present work we are witness to the climatic moment.

The landscape is intimately bound up with the human condition in Yeats’ work, often providing an integral background to the drama that unfolds before it. In The Bones that relationship is even more explicit as Yeats frames the man in the corner and devotes the greater part of the panel to the exotic landscape. Executed with his expressive use of colour and applied with energetic use of brush and palette knife, almost sculptural in the figure's face, the painting possesses a vitality and originality that is uniquely Yeats.