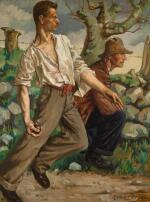 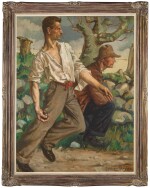 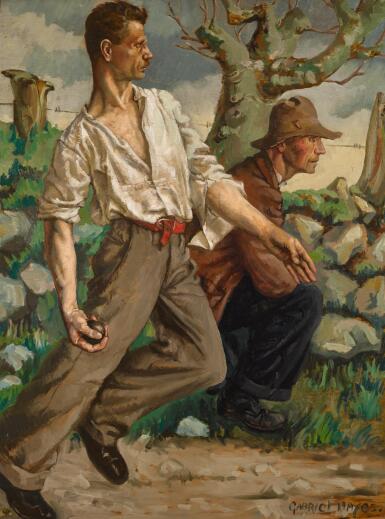 Property from the Collection of Eddie Jordan

Property from the Collection of Eddie Jordan

PROPERTY FROM THE COLLECTION OF EDDIE JORDAN

The board appears sound and the work in good overall condition. A few minor hairline cracks visible in the panel in the white shirt above the waist of the left-hand figure. These appear stable. An old label with number 207 (possibly from an exhibition) is adhered in the lower left corner. The work may benefit from a light surface clean.

Under ultraviolet there appear to be no obvious signs of retouching.

Dramatically posed, a bowler is poised, ready to release his 'bullet'. Beside him his partner, or competitor, looks keenly down the road. The setting is Lough Gur, Co. Limerick, where Hayes' husband, an archaeologist and lecturer at UCC, was excavating. The model for the 'Bowler' was the foreman of the excavation, Jock Kiely, and the on-looker is Lar Gorey, a local farmer.

The striking picture provides a rare glimpse of road bowling in action. As Robert Harris describes the game: "A strong West Cork tradition, it was a local pastime which spread to Armagh and, through emigration, to London and the United States – while other versions of the game exist in Holland and Germany. But the county of Cork, particularly the West, is its true home. A notable merit of the sport is that it requires minimal equipment and facilities: an iron ball (or ‘bullet’) weighing 800 grams and 18cm in circumference and about 4 kilometres of public road. The object is to throw the iron ball along the road. There are two players – or two teams – in each match, and the match involves one journey along the road in one direction, each player having his own ball. There’s usually another match when the crowd returns along the same route. The winning player or team is the one that reaches the end of the course with the fewest throws.' (Roaringwater Journal, 20 January 2013, https://roaringwaterjournal.com/2013/01/20/bol-an-bhothair/

Gabriel Hayes was taught by Sean Keating at the Metropolitan School of Art in Dublin, his influence keenly seen in the realist tradition of the present work, and the elevation of local men to a heroic status. Aside from painting, Hayes designed the new decimal coins in the Irish currency and was also an accomplished sculptor. She is perhaps best remembered for her sculpture panels on the Department of Industry on Kildare Street in Dublin, which she worked on while suspended in a wooden cage 23 metres from ground level, defying several limitations placed on women in Ireland in the mid-20th century. She was awarded the Oireachtas gold medal for sculpture in 1977 and died in Dublin on the 28th of October 1978.