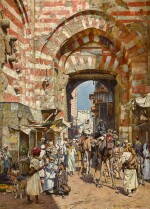 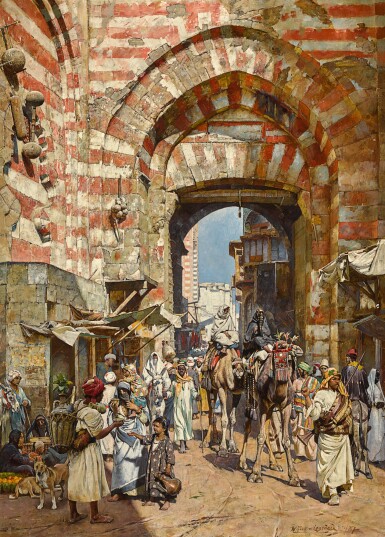 WILLIAM LOGSDAIL | THE GATES OF THE KHALIFA, CAIRO

WILLIAM LOGSDAIL | THE GATES OF THE KHALIFA, CAIRO

THE GATES OF THE KHALIFA, CAIRO

Agnew & Sons, London (purchased at the above sale)

The Gates of the Khalifa depicts the Bab Zuweila, one of three ancient gates to the city of Cairo and considered to be one of the most recognisable landmarks of the Arab quarter. The painting portrays a bustling throng of figures and animals, street-vendors and elegant travellers making their way into the city, all keenly observed and beautifully represented. This is clearly an observed scene rather than a European exotic confection of what the Arabic world was perceived to be.

Despite the large and imposing nature of the present picture, it was little-known and, curiously, omitted from the exhibition of Logsdail’s work at the Usher Gallery in Lincoln in 1894. Painted in 1887 while Logsdail was living in Cairo, it is undoubtedly one of his most impressive and important pictures. In 1880 he had sold a picture entitled A Fish Market to Queen Victoria, a sale which prompted him to remark that she must have a tasteful eye for art. In 1883 his Royal Academy exhibit The Piazza of St Marks, Venice was highly regarded and voted Picture of the Year by public vote.

Amid this acclaim, Logsdail, keen to further the scope of his subjects, embarked on a series of paintings journeys. His younger brother Alfred served in the Merchant Navy as Chief Officer on the Bagdaskhi of the Persian Gulf SS Company, the Captain of which was an old friend of William’s from his days at Lincoln Grammar School. Logsdail’s fortuitous connection with the Captain, combined with his brother’s travels, accorded him a convenient mode of transport; he was also able to ship his paintings back to England, which allowed him to paint pictures of grand scale.

William bid farewell to Alfred at Port Said and ventured alone to Cairo where he hurriedly rented a house in the heart of the Arab quarter. He befriended the painter Gervase Ker; becoming restless, they both travelled to seek other inspirations in Jerusalem, Jaffa, Thessaloniki, Istanbul and Greece. After eight months, Logsdail finally returned to London. He moved into a studio at Primrose Hill and thereafter painted the urban bustle of London.

Why he did not exhibit The Gates of the Khalif at the Royal Academy remains a mystery. He sent three of his Egyptian pictures to the Grosvenor Gallery: The Sphinx at Sunrise, Mosque of the Helmijeh and The Sphinx and Pyramid of Cheops. The Gates of the Khalifa does not seem to have been exhibited until 1895 when it was shown at the Guildhall. It was lent to the exhibition by Henry James Turner (1831-1924), a successful manufacturer of paint and varnish who assembled a large collection of oil paintings, drawings and sculptures by contemporary British and continental artists.

In 1888 Edward Goodall painted a watercolour for the Royal Society of Painters in Watercolours of the same scene as Logsdail’s entitled Bab Zooaleh in which the architecture is identical, demonstrating how close to the original Logsdail adhered.