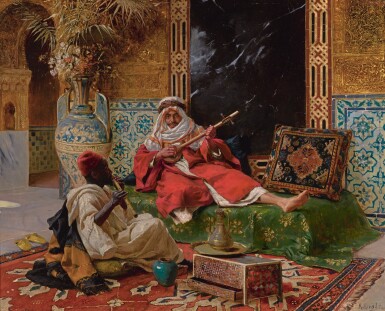 London, Mathaf Gallery, Spring Exhibition of Important Orientalist Paintings of the 19th century, 1984, no. 2, illustrated in the catalogue

Set against a lavish background decorated in tiles, marble and silk, two men play a stringed lute and an end-blown flute. The objects so meticulously depicted in this scene reflect European artist travellers' fascination with the architectural and decorative elements they encountered on their journeys, which in turn captivated audiences at home. They include a version of a Kazak Cheleberd rug (sometimes called an Eagle Kazak) from the south west Caucasus, a cushion that is a stuffed southwestern Persian saddlebag, probably Afshar. In the background one finds a typical Alhambra vase adorned with flowers and palm fronds. The vase takes its name from the cobalt blue vases found in the Alhambra and dates to the Nasrid dynasty.