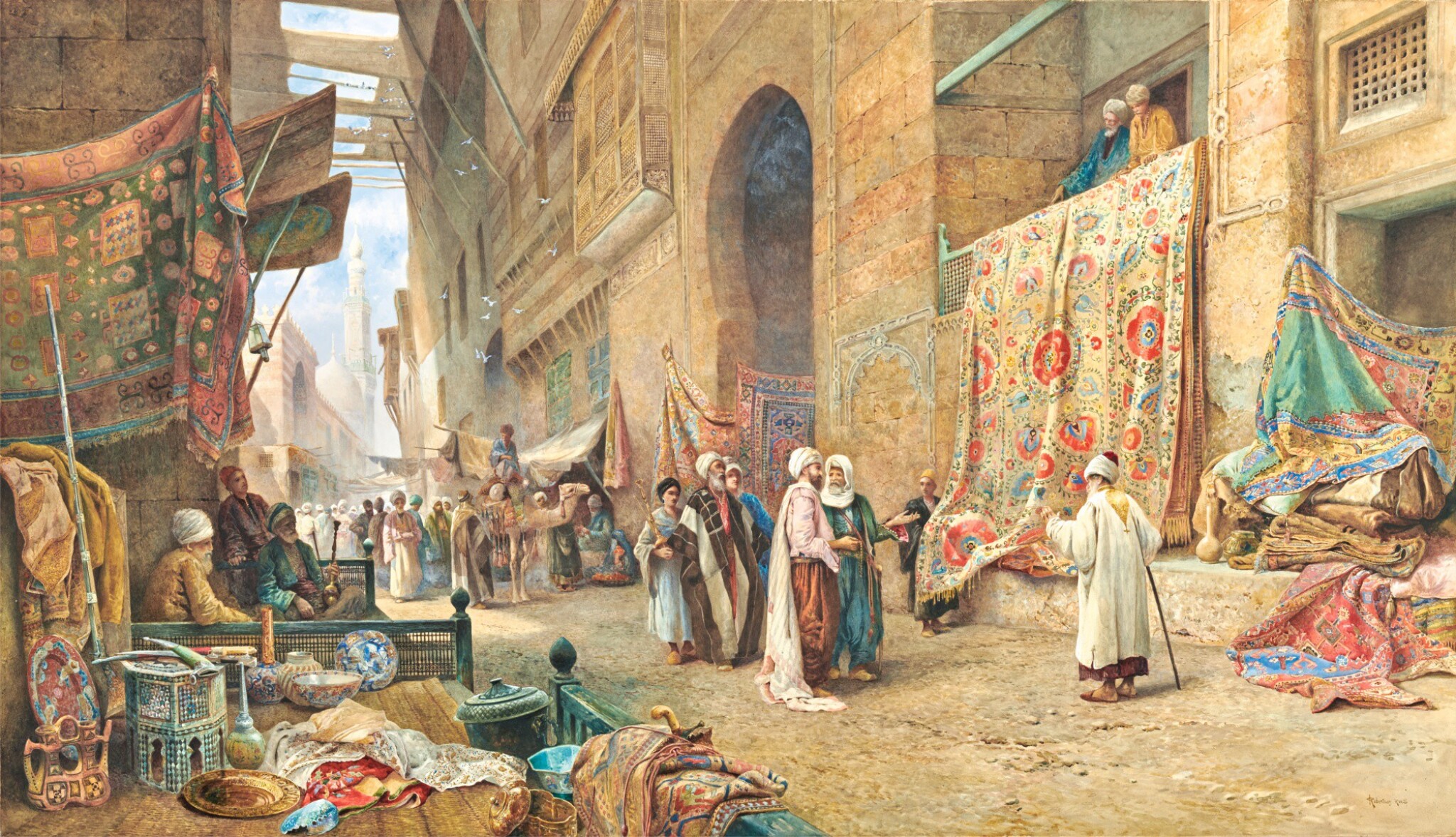 watercolour and gouache over pencil on paper

Mathaf Gallery, London (by 1983; purchased from the above)

Beneath the glaring white light of the Egyptian sun, a Cairene carpet seller shows a group of wealthy men his finest stock. The sunlight illuminates the scene's vibrant colours to their best and invites close inspection of the market's exemplary craftsmanship and fabrics.

An impressive Bokhara-type rug is draped over the balcony to the right. Two men watch the animated discussion below in which merchants and buyers haggle and argue over the various carpets' quality. Neighbouring vendors sit in their doorways or lean nonchalantly against the walls, assess the seller's patter and perhaps hope to capture the customer's attention to direct them to the wares arrayed outside their own shops. In the lower left, various merchandise has been laid out for the day, including painted ceramics, a Mamluk mother-of pearl inlaid table and other woven textiles.

This is a bustling scene of commerce and a celebration of craftsmanship painted with Robertson’s typical love of fine detail and contrasting textures. It is a superlative Robertson work painted on a scale considered monumental for the watercolour medium. Although trained as a painter in oils, Robertson preferred watercolour for his Orientalist subjects, perhaps because, like his contemporaries John Frederick Lewis and David Roberts, he felt that its luminosity allowed it to capture Egypt's bright light.

Robertson painted a similar subject in watercolour in the Carpet Seller at the Bazaar-Khan el Khalili (sold Sotheby’s, New York, 5 May 1999, lot 173) and in oil in The Carpet Seller (sold Sotheby’s, New York, 5 May 1999, lot 254). However, both depict a dellal, (a type of merchant or broker who would roam the Cairo bazaars and offer carpets for sale on behalf of shop-keepers and private sellers. These two pictures are single-figure subjects and arguably more anthropological and less dramatic and narrative than the present picture.

In 1887, Robertson painted another Carpet Bazaar, Cairo (Christie’s, London, 30 November 1984, lot 108) exhibited at the Royal Watercolour Society, which is similar in quality to the present work but depicts an enclosed courtyard. The present picture is also comparable in terms of scale and visual complexity to Loot of 1890 (sold Sotheby’s, London, 5 November 1997, lot 187) which included equally fine renderings of still-life detail and animated character. Robertson often experimented with the scale of objects he depicted, for example, exaggerating the sizes of carpets. In doing so, he rendered the objects his work's true protagonists.

Charles Robertson was born in Walton-on-Thames but left England in his youth to live in Aix-en-Provence in France; he later moved to Italy. It may have been in France that Robertson saw and was inspired by the European fashion for North African scenes. In 1862, at eighteen years of age, he first travelled to Algeria and was instantly enamoured by the local culture and customs. Although he had a home in Godalming in Surrey, he loved to travel and embarked on numerous painting expeditions to Morocco, Egypt, Jerusalem, Damascus and Turkey. His works, which recount everyday scenes in the Arab world, were exhibited at the Royal Water-Colour Society and the Royal Academy in London. His devotion to Egyptian subjects reflects Britain's enduring fascination for the Muslim world. He followed the example of earlier artists including John Frederick Lewis and David Roberts as well as contemporaries such as Carl Haag, all of whom sought authentic, unvarnished representatives of daily life in the Arab countries. Robertson dealt with rituals of religion and warfare as well as genre subjects set in cities and desert landscapes of those countries, and was praised for his 'rendering of oriental life and manner’ (Illustrated London News, 8 May 1886).