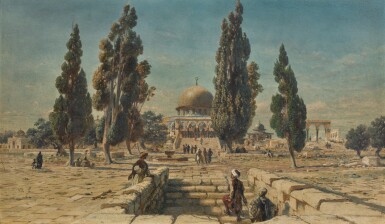 CARL HAAG | THE DOME OF THE ROCK, JERUSALEM

CARL HAAG | THE DOME OF THE ROCK, JERUSALEM

THE DOME OF THE ROCK, JERUSALEM

The Dome of the Rock, one of the oldest extant works of Islamic architecture, is among the holiest shrines in Islam, situated on the Temple Mount in the Old City of Jerusalem. According to Islamic tradition, the site marks the spot from which the Prophet Muhammad ascended to heaven.

Haag's view is from the nearby Al-Aqsa mosque just to the south, whose main ablution fountain, known as al-Kas ('the Cup'), is seen in the centre of the composition. Worshippers use the fountain to perform wudu, a ritual washing of the hands, arms, legs, feet, and face before entry into the mosque. It was first built in 709 by the Umayyads, but in 1327–28 Governor Tankiz enlarged it to accommodate more worshipers. It was originally supplied with water from Solomon's Pools near Bethlehem.

Between 1858 and 1860 Haag travelled extensively in the Middle East. In April 1859, he visited Jerusalem. Despite the gradual emergence of a tourist trade in the mid-nineteenth century, it was almost impossible for any Western visitor to gain entry to most religious monuments. However, at the special request of Queen Victoria, the Pasha of Egypt granted Haag permission to paint the Dome of Rock, which the artist reproduced multiple times, including in some exquisite watercolours made in situ of its interior.