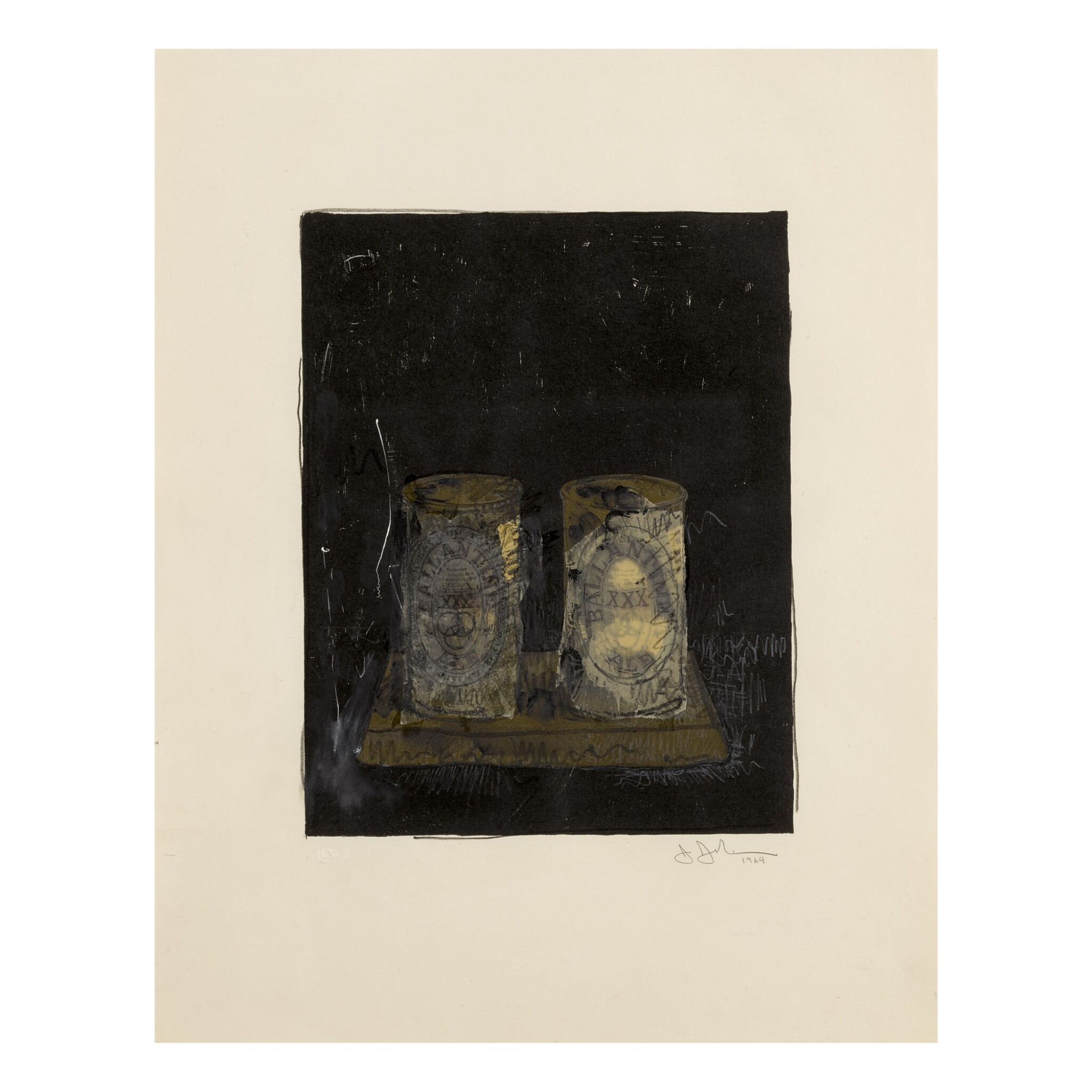 Extensive handcoloring in ink and crayon with tracing paper collage over a lithographic base, 1964, signed in pencil and dated, a unique example on Japan, with the ULAE blindstamp, framed

With full margins, the print is in good condition. (A small horizontal crease at lower left sheet edge.)

Dismissing the new wave of young talent Leo Castelli promoted in the late 1950’s, Willem de Kooning teased: “You could give that son of a bitch two beer cans and he could sell them.” And so, Jasper Johns did, casting two cans of Ballantine Ale in bronze for Castelli Gallery. The sculpture, Patinated Bronze (Ale Cans), sold immediately to Robert and Ethel Scull for $960. Initially perceived as a witty retort to De Kooning and his fellow Abstract Expressionist’s prideful remarks, the work is now recognized for its pioneering role in the advent of Pop Art. Carefully sculpted and painted to mimic Ballantine’s branding, the sculpture inspired discourse about consumerism — and just two years later Andy Warhol would unveil his first Soup Cans.

While Warhol sought precision in repetition, Johns was obsessed “with the repetition of images in changing contexts - an obsession perfectly aligned with the capabilities of printmaking.”[1] He transferred his Ale Cans from three dimensions to two, re-inventing them on lithographic stones and aluminum plates. On a mission to explore the fine differences between seemingly identical objects and the tension between them, he experimented with numerous proofs before completing the edition of 31, agonizing over how to best re-interpret his sculpture on a flat surface.

Exhibited altogether at New York’s Museum of Modern Art in 1996, the Ale Cans proofs best demonstrate Johns’ evolutionary and rigorous approach to printmaking. The present example, with collage and additional handcoloring, is the most akin to Johns’ contemporaneous works on canvas. Just as he experimented with encaustic and textural elements in his paintings, the artist applied glinting foil and matte crayon to the surface of these Cans. The resulting patina is most reminiscent of Johns’ sculpture and adds a tactile quality that suggests volume and depth in an otherwise dark, dramatic void. Both illusionistic and realistic, this unique work is arguably his most successful.