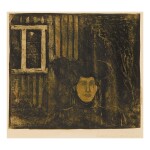 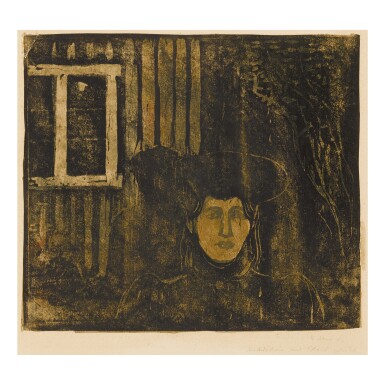 Woodcut printed in black, green, red and ochre, with handcoloring, 1896, Woll's II of IV, a rare and early proof before the block was divided, signed in pencil and inscribed 'Mondschein mit Handgedrukt in 4 Farben' on the mount, on China paper mounted to card, hand-printed by the artist, framed

The print is in good condition. A small diagonal tear across the upper left image corner (stabilized by the mount) and a small vertical tear at the lower right image edge. The mount with light-stain and a few flattened creases.

Moonlight I is amongst the most complex and inventive modern woodcuts, made even more impressive by the fact that it is believed to be Munch’s second-ever attempt at the medium. Employing what became known as his “jigsaw” technique, the artist sawed oak woodblocks into pieces and worked them individually before reassembling his desired image. This fragmented approach enhances the sense of isolation in the composition, which is a key theme across Munch’s printed oeuvre.

In the case of this fine impression, the textural grain of the blocks creates an ethereal veil that subtly separates the viewer and the ghostly beauty, further evoking a sense of physical and emotional distance. Perhaps because it was one of his earliest woodcuts, many impressions are printed slightly dryly or unevenly. This superb example is especially adept, printing richly and evenly, and heightened by additional handcoloring.

Munch first explored this subject in 1893, when he created an oil painting of the same name. Light and dark are largely emphasized in the painting: the willowy woman leans against a gleaming white picket fence in a somber black dress, her face spot lit by the moon, which also casts disruptive shadows in the otherwise picturesque scene. In the woodcut, Munch emphasizes the psychology of the mysterious woman by cropping the image, placing her melancholy face at the foreground. A tree added at right and the window at left encircle her, while a shadow looming in the background incites tension.

In a letter to Munch dated 1899, his fiancée Tulla Larsen describes one of his prints as “the woman by the window”, probably referring to this work. Little did she know that the female subject would come to be widely recognized as Emily “Millie” Thaulow, the painter-printmaker’s first great love. Munch met Millie, the wife of a distant cousin, in 1885. Their dramatic affair was short-lived but haunted the artist for life, leaving him with a fear of intimacy. His resulting commitment issues may have contributed to the dissolution of his tumultuous relationship with Tulla – which ended with a gunshot wound to Munch’s left hand.