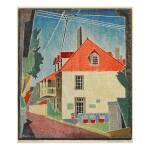 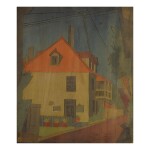 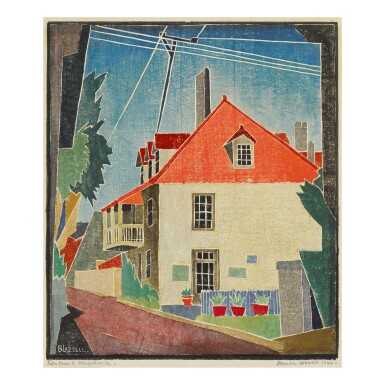 THE FATIO HOUSE II AND BLOCK 120

Woodcut printed in colors, 1940, signed in pencil, dated, titled 'Fatio House II, St. Augustine, Fla.' and numbered '1' in the lower margin, inscribed on the verso 'Color Wood Block Print/"The Fatio House II."/Blanche Lazzell/April -1940', also inscribed in ink '494 number from all blocks to date/1 number from this block to date', one of only three impressions of this extremely rare print, on Japan paper, together with the woodblock (Block 120), inked in colors, framed (2 works)

With wide margins, the print is in good condition except the upper and right sheet edges are slightly shaved. Very faint discoloration and minor printer's creases in the margins. (Pale damp-stain on the verso.) The block is in good condition (the reverse not examined).

The family of the artist

Private New York Collection, acquired from the above in 1982

In his essay, "The Provincetown Print", included in Blanche Lazzell, The Life and Work of an American Modernist, David Acton states:

“In 1939 Lazzell escaped the northern winter by traveling to Florida. She first visited Cuba, and then settled in the art colony of Saint Augustine, where some of her friends from Provincetown spent their winters. The handful of prints Lazzell made in Saint Augustine represent city landmarks and tropical flowers. Notable among them is The Fatio House (1939, Block 119) which depicts a famous territorial period inn standing on narrow, picturesque Aviles Street, in the center of the art quarter. Built at the end of the eighteenth century of coquina – a porous local stone of coral and shell – the building is known for its elegant proportions, colonnade and Spanish balconies. Lazzell created an accessible, realistic view of the building, which must have intrigued her as a cubist study for its suspended balconies, divided windows, dormers, and ashlar blocks. By framing her image with the edges of adjacent houses, she suggested the confined proportions of old Aviles Street. She also included the power lines overhead to further emphasize this tightness, and to fragment the sky in a manner reminiscent of her Provincetown Church Tower. Lazzell probably made this woodcut for exhibition at the Saint Augustine Arts Club in February. A few weeks later she created Aviles Street (1940, Block 120), a print that depicts another view of the Ximenez-Fatio House seen from the north. Lazzell returned to Saint Augustine occasionally during the winters of the early 1940s. She was there in 1944, when a solo exhibition of her prints was sponsored by the Arts Club of Saint Augustine.”

Although Lazzell may be best known for her prints, she found the term insufficient to describe the white-line woodcuts that now form the most recognizable element of her oeuvre. She at times referred to them as “woodblock paintings,” but later commented “These creations cannot be compared with prints in general. They could be called by another name, but I have never arrived at a suitable one. So they go as prints and some people think I can do a hundred from each block. These are not pot boilers! Far from it!” (David Acton, "The Provincetown Print" in Blanche Lazzell: the Life and Work of and American Modernist, edited by Robert Bridges, Kristina Olson, and Janet Snyder, Morgantown, WV, p. 180)

Lazzell’s process was labor-intensive, and she considered every impression pulled from a woodblock to be unique. Cutting the image from a single block, she inked the segments of the block individually, typically using French watercolors straight from the tube, and printed the image by securing the sheet with a row of tacks along one edge and rubbing the back by hand, often lifting the paper to check the progress and adjust the inking. By using thin washes and removing excess ink from the block surface, she utilized of the grain of the block to create muted passages and modulate texture within the image. The process not only produced a print with complex variation in tone and texture, but also left the block as a polychromed low-relief sculpture. Lazzell kept these blocks carefully and wrote in a letter to her cousin Grace, “I consider them my most valuable possessions.” (The artist quoted in Barbara Stern Shapiro, From Paris to Provincetown: Blanche Lazzell and the Color Woodcut, Boston, 2002, p. 20)