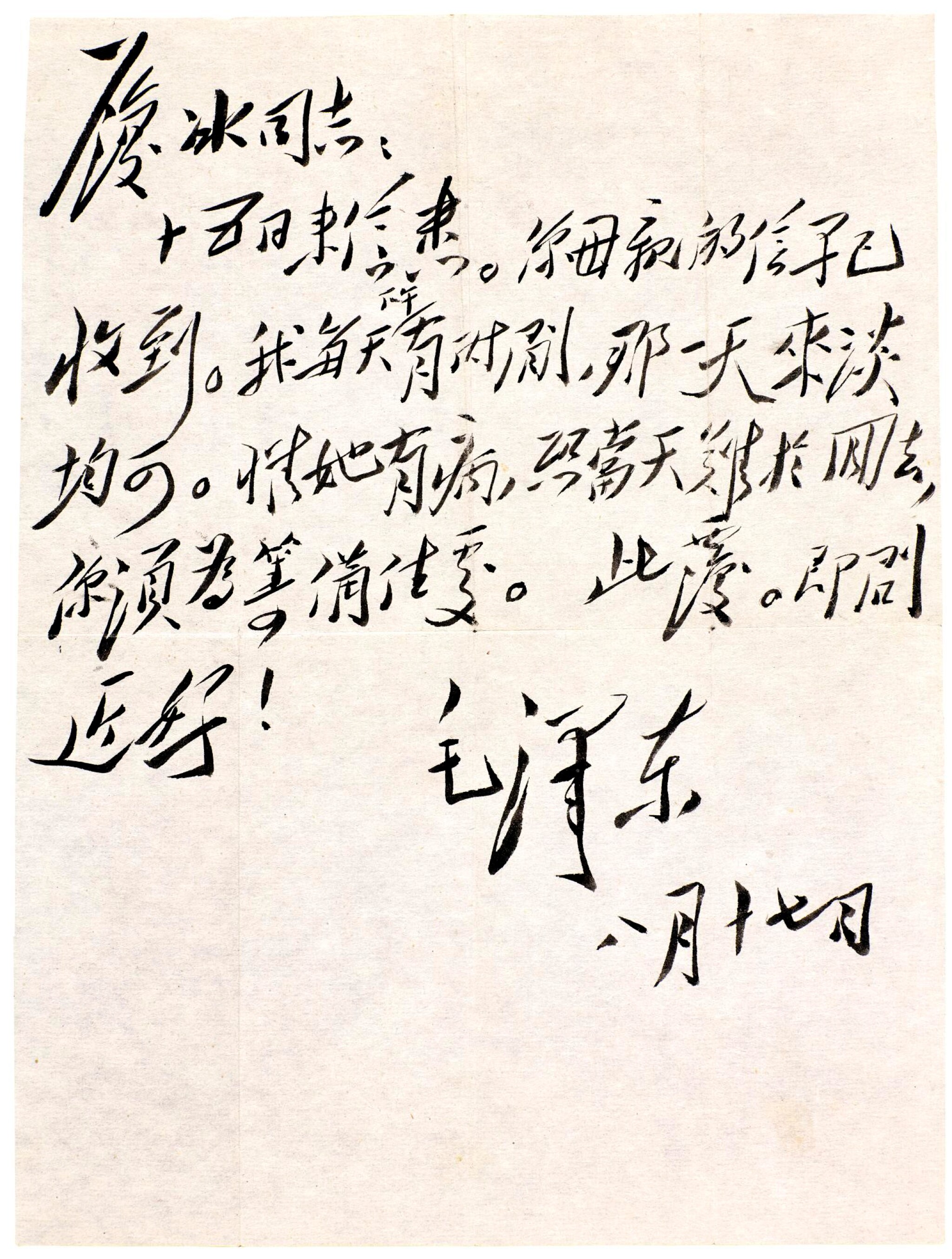 written in black ink with a brush pen, at a late stage of the Chinese Civil War, in which Mao acknowledging receipt of Yang Yi's letter of the 15th August, together with one from his mother, telling him that he is available every afternoon, the only problem being that his mother is unwell and so has to stay overnight

1 page, 4to (c.28 x 21cm), thin laid paper, together with autograph envelope formed from a discarded fragment of a printed map of the region around Changzhi in Shanxi Province, red ink-stamp postal mark with hand-written endorsement, 17 August, [c.1947-1949]

AN EXCEPTIONAL RARITY: WE HAVE NO RECORD OF ANY AUTOGRAPH LETTER SIGNED BY MAO HAVING PREVIOUSLY BEEN SOLD ON THE INTERNATIONAL MARKET. The only auction records for Mao manuscript material, aside from signatures in albums, are late manuscript notes (sold in these rooms, 2017), a typed letter signed to the British socialist leader Clement Attlee (sold in these rooms in 2015), and a small group of documents and letters relating to negotiations with Chang Hsueh-liang (sold at Bonhams, New York, in 2013). Unlike any of those items, this autograph letter written to a trusted friend exhibits Mao's remarkable skill at calligraphy.

Mao was celebrated as a master calligrapher in his lifetime and his writing was displayed publicly on buildings across Beijing, including the Memorial to the Martyrs of the Revolution.  He brought about new forms in Chinese calligraphy called "Mao-style" or Maoti, which has gained increasing popularity since his death. In manuscripts such as this letter, Mao followed the new fashion of writing from left to right, rather than from top to bottom, giving greater emphasis to the horizontal rather than vertical dimensions of characters.  He most often used a hard-tipped brush in running script, as here, ideally suited to writing small characters quickly and clearly. He favoured light and silken downward strokes, but when working with a thicker brush, he emphasized diagonal strokes more heavily. As Mao came closer to victory over the Guomindang (GMD), his style became lighter and freer, and began to juxtapose large characters with small ones.

Written on plain paper rather than official stationery, with an envelope made from a recycled map of part of Shanxi Province which had been the site of the first major clash of the Civil War in 1945, this is the letter of a guerrilla leader not a head of state. It comes from the late 1940s, one of the great turning points in history when Mao was on the verge of establishing the PRC and bringing to an end China's bitter century of chaos, bloodshed, and national humiliation. The defeat of Japan in 1945 had reignited civil war between Mao's Communists and the Nationalist Guomindang under Chiang Kai-shek. The GMD had a larger army, more territory, and the support of the USA, but Mao defiantly dismissed his enemies as "paper tigers": "We have only millet plus rifles to rely on, but history will prove that our millet plus rifles is more powerful than Chiang Kai-shek's aeroplanes plus tanks" (interview with Anna Louise Strong, August 1946). Mao used the greater mobility of the Red Army, which enjoyed higher morale and greater local support amongst the peasantry, to expose the weakness of the GMD. Not only was he willing to surrender territory but during the campaigns in northern China he used himself as bait, deliberately ensuring that he was never more than a day's march ahead of his enemy until an exhausted GMD was brought to pitched battle at a site of the Communist's choosing. The letter probably dates either from August 1948, just before the launch of the Liaoshen campaign which ended with Communist victory in Manchuria, when Mao was in Shanxi Province, or August 1949, when Mao was in the Fragrant Hills near Beijing waiting for the proper moment to enter the city and formally establish the PRC.

Mao's correspondent in this letter, Yang Yi, was a trusted Communist cadre and family friend of Mao. He was the son of two early party members, Yi Lirong and Xu Wenzhao, who had developed a close bond with Mao and his family during the years when the party was headquartered in Yan'an. Yang Yi was a friend and contemporary of Mao's own son Mao Anying. In January 1948 Yang Yi had joined the party's news mouthpiece, the Xinhua New Agency, and was sent to work in northern Shaanxi. In later years he led the Xinhua Agency bureaus in Prague, Cairo, and London. THIS IS A RARE LETTER BY MAO TO A TRUSTED FAMILY FRIEND WRITTEN AT A CRUCIAL TURNING POINT IN MAO'S, AND CHINA'S, HISTORY.