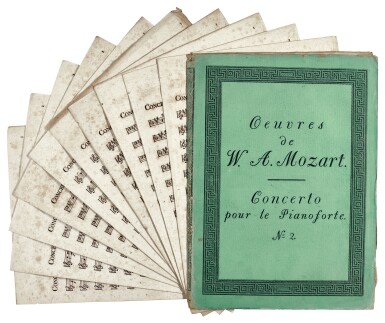 We have traced only one copy of this edition at auction during the last twenty-five years (sale in these rooms, 21 May 2004, lot 122). Of the 17 copies recorded in Haberkamp, only 11 are apparently complete.

K.595 is one of only six Mozart piano concertos published within the composer's lifetime and is, in fact, one of the last works of any kind by Mozart to be published before his death on 5 December 1791 (it was first advertised in the Wiener Zeitung on 10 August 1791). Alexander Weinmann has suggested that Artaria may have used for the edition plates taken over from another of Mozart's publishers, Franz Anton Hoffmeister, as appears to have been the case elsewhere: see, for instance, Artaria's first edition of the "Prussian" Quartets, K.575, 589 and 590, sold in these rooms on 17 May 2002 (lot 134). Mozart's cadenzas and Eingang for K.595 were first published by Artaria in 1801.