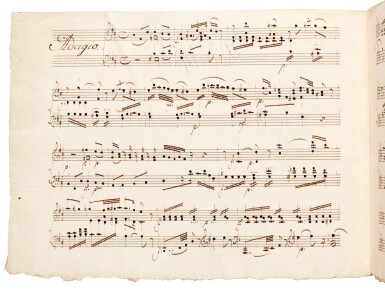 W. A. Mozart. Eighteenth-century scribal manuscript of the Adagio in B minor for piano, K.540, late C18th-early C19th

W. A. Mozart. Eighteenth-century scribal manuscript of the Adagio in B minor for piano, K.540, late C18th-early C19th

Eighteenth-century scribal Viennese manuscript of the Adagio in B minor for piano, K.540, late eighteenth- or early nineteenth century

The B-minor Adagio was entered by Mozart in his own thematic catalogue of works under the date of 19 March 1788, only a few months before the first work in the final great trilogy of symphonies in E flat, G minor and C. The earliest surviving edition is that of Artaria (1794); a copy of the supposed actual first edition (1788) by Hoffmeister has never been traced. Mozart's autograph is preserved in the Stiftelsen Musikkulturens Främjande, Stockholm. The present manuscript is possibly in the hand of a copyist associated with the music dealer Traeg from around 1795 to at least 1800. We are pleased to acknowledge the assistance of Dexter Edge in our cataloguing of this lot.