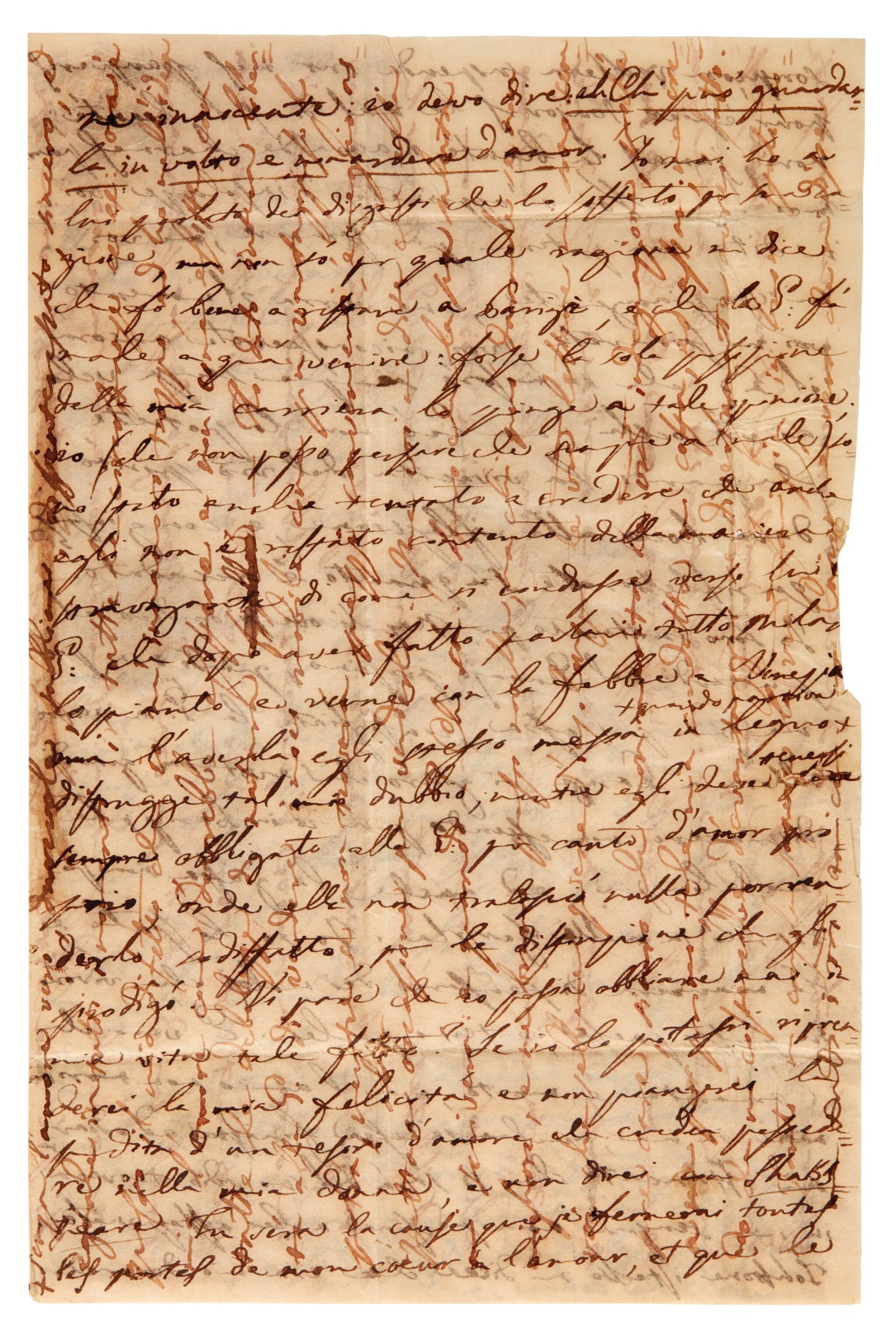 Five long, revelatory, autograph letters signed (“Bellini”), about his love affairs, his relationships with women, his break with Giuditta Turini, his opera I puritani and Shakespeare, 17 February 1834 to 7 April 1835

to Contessa Virginia Martini in Milan, angrily defending himself against her charge that he has abandoned Giuditta Turina (“G:”), who has caused him great suffering over the past two years, noting that Giuditta evidently now has an older German lover, discussing a person called “D” who unknowingly revealed her inconstancy, comparing his disillusion with Claudio’s dismissal of Hero as a fallen woman in Much Ado About Nothing, lamenting the apparent breach this has caused in his relations with the leading soprano Giuditta Pasta (“La Pasta”) and reproaching Martini, whom he formerly regarded as a special friend, for apparently siding with Giuditta Turina against him;  Bellini repeatedly urges her and her friends in Milan to dissuade Giuditta from following him to Paris, where there is already gossip about her and where she would be in an unhappy and false situation, rejected by society, confessing that the very idea fills him with dread, when he needs peace and calm to fulfill his many opportunities and obligations in opera, including composing I puritani for the Théâtre-Italien, giving details of the negotiations and his search for a librettist; he rejects her complaint that these are mere excuses, pointing out that the opera house has offered him far better terms than any Italian house could offer, twelve thousand francs and the singers Rubini, Tamburini, Grisi and Lablache, and that, only a day after agreeing their contract, he was visited by the director of the Paris Opéra, and emphasizing that his operas Norma and I puritani have been much more successful in Paris than were Donizetti’s Marin Faliero and Ugo Conte de Parigi, putting him on a level with Rossini and dispelling his professional envy of him; Bellini suggests meeting Giuditta in Naples, where he has agreed to compose another opera, expressing his desire for them to remain friends rather than resurrect their doomed former relationship, explaining at length why he values sincere friendship above romantic attachment, especially with Francesco Florimo, with whom he had been friends for fifteen years, to the envy of all their acquaintances, explaining that that he attends numerous balls and soirées, meeting lots of girls that he has no interest in at all, denying that he has been flirting with Madame de Caraman or Princess Belgiojoso, reporting discussions about Giuditta’s state of mind with Johnstone (“Johstone” or “Josthone”) and Trecchi, the sale of his furniture in Milan, which Giudetta was meant to be taking care of, and portraits which she was to send to Florimo

UNPUBLISHED: only the final letter is hitherto known, reprinted from a volume of memoires from 1910, containing several errors. Whilst relatively brief letters by Bellini are not uncommon at auction, we have traced none as substantial or as revealing as any of the letters in the present series for around thirty years.

This is a new source of our knowledge about Bellini’s character and his attitude towards women and friendship. He states that, whilst true friendship is of the greatest importance to him, he fears being trapped in relationships with women that distract him from his work and end in possessiveness and recrimination. What he looks for is a lasting friendship rather than romance and dependency, something like his fifteen-year long friendship with Francesco Florimo, whom he had met in Naples in 1819, and who always offered support for (rather than a distraction from) his operatic ambitions.

Bellini conducted an affair with a married woman, Giuditta Turina, from 1828 until sometime in 1833, but the precise nature of its ending is unclear because she is rarely mentioned in his surviving letters; his last was in December 1832, although he subsequently wrote others that are lost (one a "letterina evasiva"). Up to now, the most informative letter about their relationship was one that Giuditta wrote on 19 February 1834 to Florimo (discovered by Frank Walker in 1959), where she expresses her enduring love for the composer and puzzlement at his unreasonable behaviour. The present letters about her to the Countess Martini reveal the true nature of his heart. Florimo is suspected of having destroyed many letters from Bellini that showed him in a poor light, whereas Virginia Martini was Giuditta’s closest friend and seems to have kept hers. Bellini alludes to Giuditta’s coquettish behaviour and her unfaithfulness in his reference to Shakespeare, quoting the passage where Claudio rejects Hero at the altar, having been tricked into believing her a whore: “For thee I'll lock up all the gates of love / And on my eyelids shall conjecture hang / To turn all beauty into thoughts of harm / And never shall it more be gracious” (Much Ado About Nothing, Act 4, sc.1). The allusion is hardly appropriate to his situation, but it is remarkable that Bellini even knew any Shakespeare; indeed this comedy had neither been published nor publicly performed in Italy. Bellini adapts the French prose translation by Letourneur, Beaucoup de bruit pour rien (1781).

Bellini's correspondent is Contessa Virginia Martini Giovio della Torre (1778-1836), one of Giuditta's closest friends and a great help to her during her legal dispute with her husband Ferdinand. She was also a friend of the soprano Giuditta Pasta, for whom Bellini had written the lead roles in La sonnambula, Norma and Beatrice di Tenda.  It transpires from these letters that his break with Turina also caused a breach in his previously close relationship with "La Pasta". The impassioned composer uses every space available to him in the first three letters, which are cross-written, even onto the folds of the address leaf, making a few short passages difficult to decipher. A fuller transcription can be made available to the eventual purchaser.