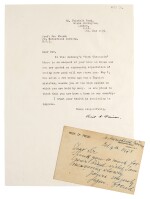 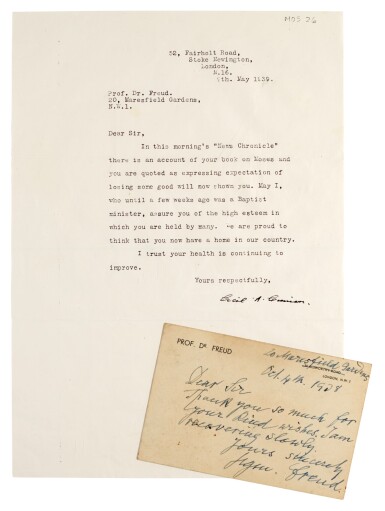 thanking him for his kind wishes and informing him that he is gradually returning to health ("...Thank you so much for your kind wishes. I am recovering slowly...")

This short note was a reply to a letter to Freud (a copy of which is enclosed with this lot) by former Baptist minister Cecil Cunion, in which the latter mentions Freud's opinion, quoted in the New Chronicle, that he may lose some of the goodwill currently being shown to him, on account of his book on Moses, assures him of the high esteem in which he is held by many, and expresses the hope that his health is continuing to improve. Freud's book on Moses, Der Mann Moses und die monotheistische Religion, was published in German in 1938 and in English the year after. It caused some shock among the public on account of Freud's suggestion that Moses was born an Egyptian. Unfortunately, Freud's health did not improve (he had been suffering from jaw cancer for many years), and he died on 23 September 1939.