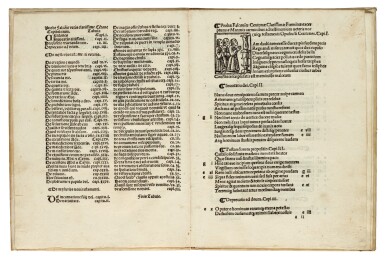 This work, a religious poem by the fourth-century Christian poetess Faltonia (or Falconia) Proba, was printed as the fourth part of a volume also containing Philippus de Barberiis, Discordantiae sanctorum doctorum Hieronymi et Augustini, though there are many surviving copies of just the Centones so it may well have been issued separately. The Centones are extracts from Vergil arranged in order to describe episodes from the Old and New Testaments. Proba appears in Boccaccio's In praise of famous women.