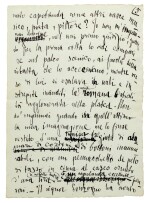 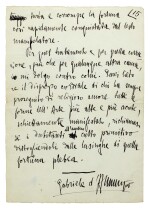 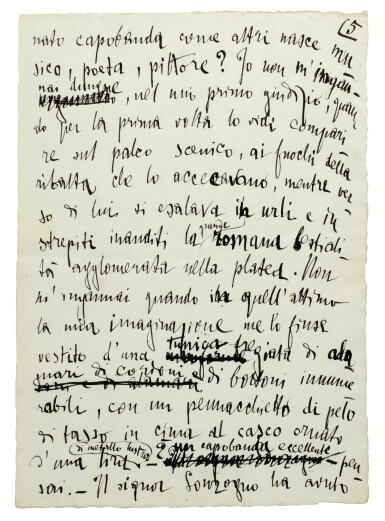 a working manuscript written in black ink with many deletions, corrections and revisions, containing a lengthy and largely personal attack on Mascagni the man, denouncing his music as the perversion of art through commercial ambition, leading inevitably to its destruction, poking fun at Mascagni's pretensions to be considered as an artist, portraying him as a provincial bandmaster strutting amongst the oleanders at his villa, elaborately attired in a tunic with military braiding, a lustrous helmet adorned with badger fur and flaming red shoes, pointing out that his publisher Sonzogno only hired him to make lots of money, not art, and is evidently happy with the result, objecting to Mascagni's performance of his "piccola messa puerile" (followed by Verdi's Requiem) in the cathedral of Orvieto, thereby desecrating Luca Signorelli's wonderful "visioni dantesche" of the Day of Judgment,

15 leaves, each written on one side only, large 8vo (c.21.5 x 16cm), hand-made paper ("Miliani"), no place or date, [1892], together with an autograph letter to the publisher Edoardo de Fonseca (enclosing an Ode, asking about its presentation and demanding to see proofs), a visiting card inscribed by D'Annunzio with a six-line autograph message to Pascal Getzel, 3 autograph envelopes, [1895]-21 April 1901

D'Annunzio's provocative article was prompted by his envy of the celebrity attained by Mascagni in the early 1890s, with the world-wide success of his one-act opera Cavalleria rusticana (1890). The article was published in the newspaper Il Mattino on 3 September 1892. Mascagni was duly incensed, and was especially wounded by the personal nature of the attack. Two decades later, in 1913, Mascagni made a very literal setting of D'Annunzio's very long play Parisina for La Scala. He later averred that the opera's spectacular failure was merely proof of how unstageable D'Annunzio's original play had been.