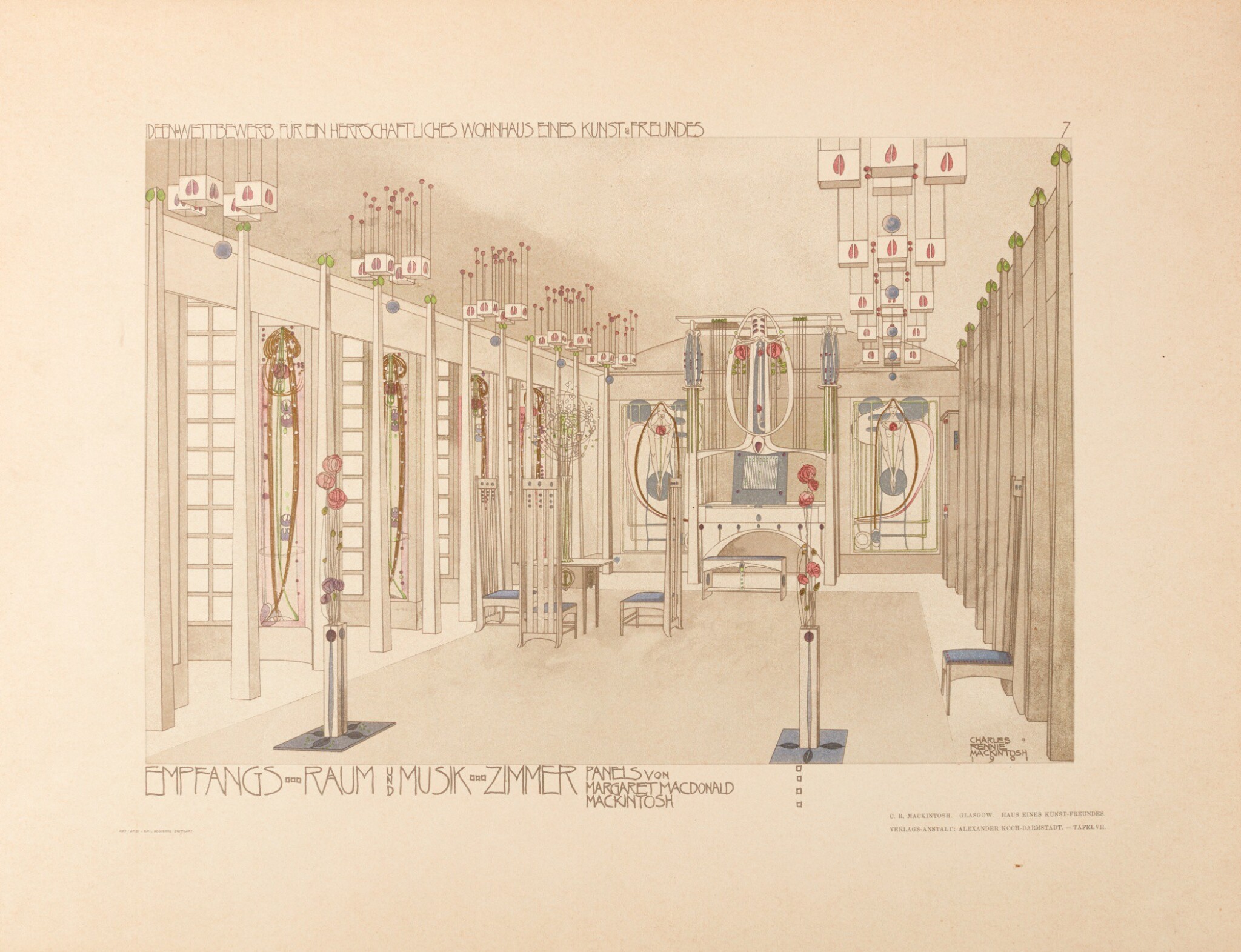 AN EXCEPTIONALLY RARE AND IMPORTANT PORTFOLIO, ONE OF THE CORNERSTONES OF THE ARTS AND CRAFTS MOVEMENT IN BRITAIN AND EUROPE, PUBLICATION OF WHICH ESTABLISHED THE REPUTATION OF BOTH BAILLIE SCOTT AND RENNIE MACKINTOSH.

ONLY A VERY FEW COPIES ARE RECORDED IN INSTITUTIONAL COLLECTIONS: one complete set in Dortmund University Library, parts II and III only in the Victoria and Albert Museum, London, and part II in the National Library of Scotland; another complete set was sold in these rooms, 12 July 2005, lot 322.

In 1901 Alexander Koch, editor of the German magazine Zeitschrift fur Innendekoration, sponsored a competition to design a "Haus eines Kunst-Freundes [House for an Art Lover]". There were thirty-six entries and the three judged as the best were published in this series of portfolios. The overall winner was Baillie Scott with Leopold Bauer as runner-up. The entry by Rennie Mackintosh was disallowed for not containing the correct number of perspective drawings, but presumably impressed the judges who awarded him a prize and requested the designs be included for publication. The three artists were not widely known before the competition which proved to be their springboard to success. None of the designs were realised at the time, although in 1996 Rennie Mackintosh's designs finally came to life when his House for an Art Lover was completed and opened to the public in Glasgow. Baillie Scott subsequently designed numerous interiors for the Grand Duke Ernst Ludwig von Hessen und bei Rhein, the patron of the artistic community in Darmstadt, and oversaw a flourishing practice in England. One of the most influential of the Arts and Crafts architects, he was described by Le Corbusier as one of "les plus grands artistes". In 1900 Rennie Mackintosh and his wife Margaret Macdonald had travelled to Vienna to supervise the installation of their work in the eighth exhibition of the "Wiener Sezession". Although their work was not too well received by the critics, they developed good relations with influential artists such as Josef Hoffmann. It was as a result of this trip that Rennie Mackintosh entered Alexander Koch's competition. Margaret Macdonald worked on the designs with her husband, and also on the subsequent commissions that came in as a result of the publication of the portfolio and other complimentary articles written by Hermann Muthesius.

The plates comprise architectural plans and elevations, external drawings and internal details of rooms, wall hangings and furniture, including Rennie Mackintosh's famous chairs and Margaret Macdonald's wall panels and decorative glass. The portfolio was reissued by Alexander Koch in book form in 1926 and limited editions were published in 1991 and 2002.