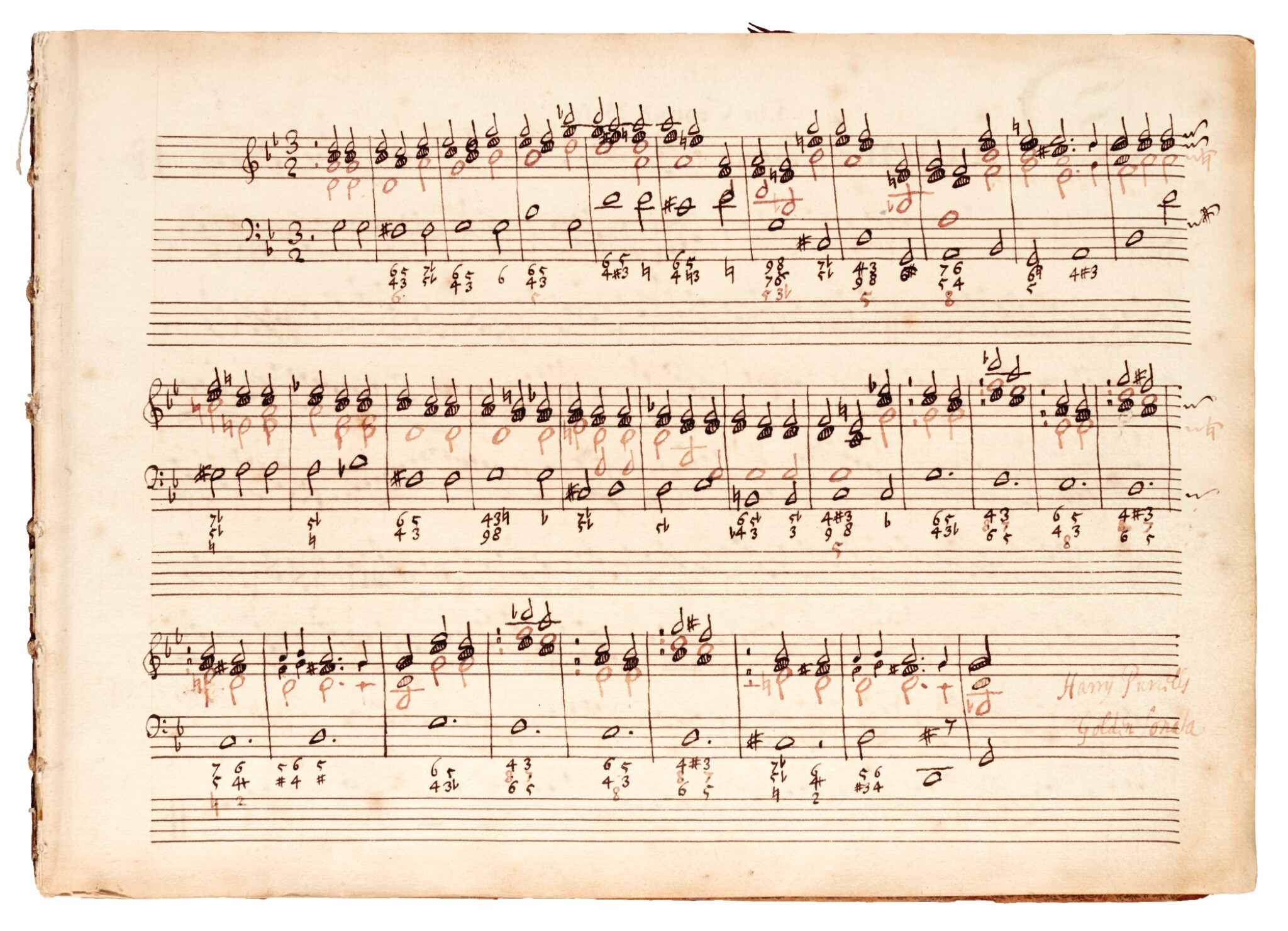 Important late seventeenth- and early eighteenth-century English manuscript of sonatas and vocal music, including THE UNIQUE COPY OF PURCELL’S SONATA IN G MINOR Z.780, with music by Corelli, Geminiani, Gottfried Finger and Edward Finch, 1691 to 1720

apparently complete, comprising ninety-eight pieces in the hands of William Armstrong and (from 1717 to 1720) Edward Finch, including twenty-five compositions by Finch (mainly for Baroque flute), notated in brown ink, with additions in red ink, on nine staves per page, six by Corelli, his arrangements of the 'Adagio' from "Harry Purcells Golden Sonata", Z.810, and of verse anthems by Purcell (O give thanks unto the Lord, Z.33), Fiocco and Roseingrave and flute arrangements of sonatas by Geminiani (15), Loeillet (4) and others and arias by Bononcini and Pasquini; together with, at the other end of the volume (inverted), on up to eight staves per page, a series of 21 sonatas, including Finch's copy of Purcell’s Sonata in G minor, Z.780, and sonatas by Gottfried Finger (14), Finch (12) and others, dated at the foot of the index in the hand of Armstrong "Hunc librum scripsit Gulielmus Armstrong London Anno Domini 1691"

c.358 pages, large oblong 4to (c.26 x 36cm), fleur-de-lys watermark, the pages ruled from one end of the volume with 8 staves (paginated 1-165), and, inverted, from the other end with 9 staves (paginated 1-60 and 1-125), 4 pages blank, contemporary panelled calf, spine in compartments, gilt edges, [mainly London and York, [1691 to 1720], provenance information to flyleaf regarding James Bartleman (1822), Thomas Taphouse (1889), William Armstrong and Edward Finch, browning to c.60 leaves in the middle of the volume (2 with tears), very worn, covers loose, spine largely sound and intact

THE "ARMSTRONG-FINCH" MANUSCRIPT IS ONE OF THE LARGEST AND MOST IMPORTANT SOURCES FOR CHAMBER MUSIC IN ENGLAND FROM 1690-1720 IN PRIVATE HANDS. This manuscript has an almost unbroken line of provenance and is still in its original (albeit worn) late seventeenth-century binding. The manuscript includes two pieces and the dated index (comprising eleven pages in all), which are recorded as lost in the detailed inventories by Holman and Roberts cited below.

England saw important developments in modern instrumental chamber music during this period, arguably more so than did France and Germany, and became a magnet for foreign composers. Besides the Purcell copies, there are fourteen pieces by the Moravian composer Gottfried Finger (c.1655-1730), a virtuoso player of the bass viol resident in London from c.1685 until 1701, six by Corelli, with arrangements of Geminiani, Bononcini and other continental composers. This manuscript contains a significant body of work for the Baroque flute (rather than the recorder), rarely published in London before the 1720s. Edward Finch (1663-1738), son of the Earl of Nottingham, was an accomplished amateur musician and seems to have known Purcell, Finger and musicians working for London theatres during the 1690s. He was one of the first serious players to take up the flute and to begin to build up a repertory for his instrument. He became Prebendary at York in 1704 and much of his contribution to the manuscript was probably written there, although he was regularly in London. William Armstrong, a copyist at the London theatres, began the volume in 1691, according to his note at the foot of the index, which already includes some of the incipits and page numbers.  Whilst one of the Corelli sonatas was not published until about 1705, it circulated in manuscript well before that. Armstrong also copied some pieces by Finch, who continued to add more music after Armstrong's death in 1717, until the volume was practically full. Armstrong's professional copies are very elegant, with ornate initials, geometrical finials and finished with grey washes, whereas Finch's are more idiosyncratic, some signed with a monogram, including a tiny self-portrait (p.87).

THIS IS AN IMPORTANT EARLY SOURCE FOR PURCELL, in the hand of Edward Finch, who probably knew the composer in the 1690s. Finch adds inner parts to the 'Adagio' from "Harry Purcells Golden Sonata", apparently for performance by a larger ensemble. The score of the florid Italianate anthem O give thanks (1693) does not follow exactly the first edition (1703), since it includes the ritornello (Z.33: 2b) before 'Remember me O Lord', but omits the section 'That I may see the felicity of thy chosen' (Z 33: 4b). Both scores tell us much about how Purcell's music was played and adapted to new performers so soon after his death in 1695. The unique item is Purcell's four-movement Sonata in G minor, a piece which Zimmerman (1963) dates to 1683-1684 but Holman to c.1690. When Thurston Dart surveyed Purcell’s chamber music in 1959, he lamented the loss of this manuscript after its supposed inclusion in the Cummings sale in May 1917. It is possible that Finch received the piece from the composer, perhaps as playing parts, but it survives incomplete, since he did not include a bass viol part (it was published thus in 1903 by Frederick Bridge). Dart was able to reconstruct the missing part even in the absence of this manuscript, although Holman indicates that there are necessarily limitations to his version of the slow movement. This manuscript is certainly the most significant early Purcell source to appear at auction since Sotheby's sales of a late-eighteenth-century copyist score of Dido and Aeneas in 2000 and the newly-discovered autograph manuscript of twenty-one keyboard pieces in 1994.