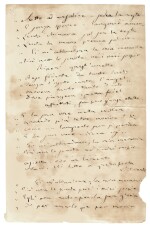 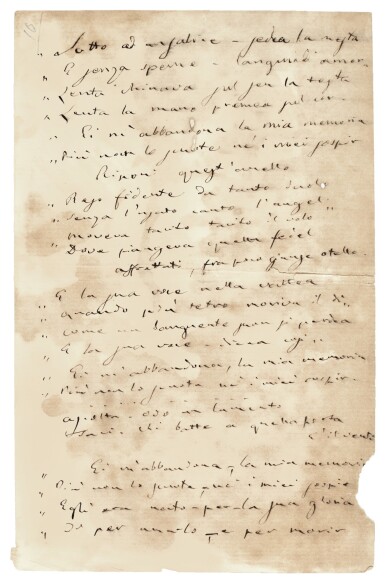 G. Verdi. Autograph manuscript draft for the libretto for the the "Willow Song" in Act IV of Otello, 1885

G. Verdi. Autograph manuscript draft for the libretto for the the "Willow Song" in Act IV of Otello, 1885

Autograph manuscript of part of the libretto of Otello, a draft of the original words of the "Willow Song" in Act IV, 1885

comprising twenty-four lines of text beginning "Sotto ad un salice -- sedea la mesta", and ending with the couplet "Egli era nato -- per la sua gloria/ Io per amarlo -- e per morir", being a transcription in Verdi's hand of Arrigo Boito's first version of the scene, radically different from the second version, in which Verdi has excluded some passages and rearranged others, the resulting text also diverging from his first musical setting of these words

THIS IS AN UNPUBLISHED MANUSCRIPT BY VERDI: a draft for the best-loved scene in his final tragic masterpiece.

Verdi set Arrigo Boito's original version of the Willow Song in Act IV, sometime before September 1885, the autograph manuscript of which survives in a private collection (see our sale on 1 December 1995, lot 375). It is likely that Verdi wrote out the present draft of the words in preparation for setting it to music, although the sequence of the lines is slightly different from his setting.  Boito's original text is printed by A. Luzio in Carteggi Verdiani, Volume 2 (1947), p.118, but not Verdi's transcription. Verdi dispenses with two of Boito's lines and replaces them here with "Ei m'abbandona -- la mia memoria/ Più non lo scuote -- nè i miei sospir"; they are taken from later in Boito's text and used by the composer as a refrain in his musical setting.

Verdi apparently asked Boito for a new version of the "Willow Song" in September 1885. Desdemona's aside to Emilia "Riponi quest'anello", Emilia's answer "è il vento" and the final couplet, "Egli era nato -- per la sua gloria/ Io per amarlo -- e per morir", are the only lines that were retained by Boito and later used in the second and final version of Verdi's "Willow Song". G. Verdi. Autograph manuscript draft for the libretto for the the "Willow Song" in Act IV of Otello, 1885
Lot Closed
Lot 97