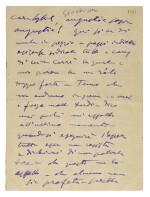 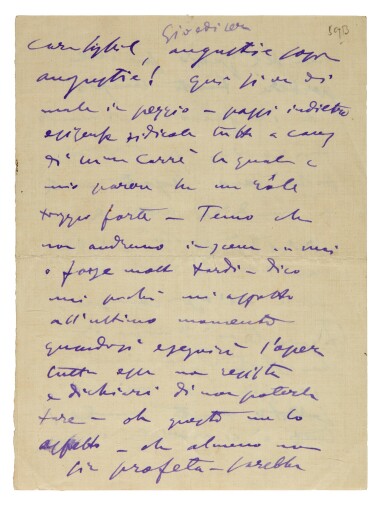 Six autograph letters and postcards about the Paris premiere of Madama Butterfly, signed (“Giacomo” and “GPuccini”), 1906

five letters to Sybil Seligman (unpublished) and one to her husband David, reporting his arrival in Paris, the first rehearsal at the Opéra-Comique, and his expectation that the opera will be staged within about a month, which will leave too little time before his departure for New York, expressing his anguish at matters going from bad to worse with the soprano, Marguerite Carré, for whom the title role is too demanding, admitting he is constrained from stating his position openly, for fear of ruining the forthcoming production of La bohème, and that he is leaving it until as late as possible to give his blessing to the production, hoping his fears are not realized; he also discusses the book by Wilde (A Florentine Tragedy) that Sybil was going to send him, meetings with Maurice Vaucaire about Conchita, and his travel plans to Milan, Torre de Lago and New York, and writes to David Seligman, asking for Sybil to be allowed to attend the production in Paris (“...Cara Sybil, angustie sopra angustie! Qui si va di male in peggio, passo indietro esigenze ridicole tutte a causa di Mme Carré la quale a mio parere ha un rôle troppo forte. Temo che non andremo in scena o mai o forse molto tardi. Dico mai perché m’aspetto all’ultimo momento quando si eseguirà l’opera...Figuratevi dunque in che stato d’animo io sia! E mia salute tanto male!...”)

﻿The letters to Sybil are unpublished. Puccini clearly expresses his frustration with Marguerite Carré, who sang the title role in the French premiere of Madama Butterfly; it was staged at the Opéra-Comique on 28 December 1906 and established the opera in the definitive form in which it is usually performed today. Mme Carré was the wife of the Director of the theatre, Albert Carré (who staged and produced the opera), but was clearly out of her depth. The letter to David Seligman is published, not quite complete, in V. Seligman, Puccini Among Friends, (1938), p.3. Sybil was Puccini’s closest female friend and his most important advisor after Giulio Ricordi.