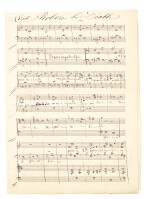 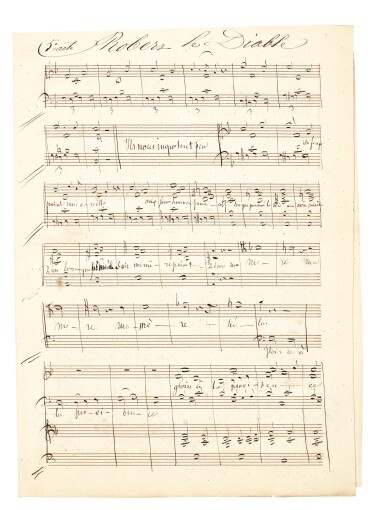 G. Meyerbeer, Autograph manuscript of part of "Robert le Diable", with the printed score given to Nourrit, c.1831

G. Meyerbeer, Autograph manuscript of part of "Robert le Diable", with the printed score given to Nourrit, c.1831

Autograph manuscript of part of Robert le Diable, together with the vocal score presented to the tenor Adolphe Nourrit, c.1831

Robert le Diable, premiered at the Paris Opéra on 21 November 1831, was Meyerbeer's first grand opera, and as such a seminal work in the history of nineteenth century dramatic music. The present manuscript transmits a variant text for part of no.21 from Act V, one which diverges from the vocal score of 1831. In this variant several passages are cut, and it is of interest that these cuts are also indicated in the heavily marked up vocal score included here, a presentation score for Adolphe Nourrit, who created the role of Robert in the opera.