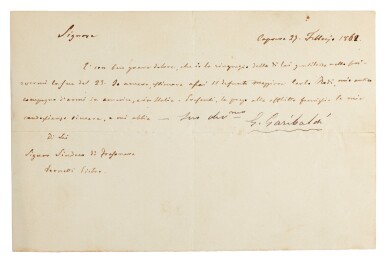 to Pietro Vernetti, Major of Fresonara, near Alessandria (expressing condolences on the death of Carlo Rodi, "mio antico compagno d'armi"), the author Rinaldo de Sterlich, Marnini (requesting him to defend Francesco Salerno against "assassini della libertà"), [Enrico?] Piccini, Tozzani (about Ugo Bassi, a martyr of the Risorgimento) and to "miei cari amici e fratelli d'armi" (about the Mille), the texts in a number of secretarial hands,