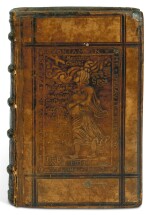 8vo (155 x 100mm.), woodcut initials, extensive early annotations at beginning, a few passages crossed through, contemporary Louvain binding of blindstamped calf with a Spes panel stamp signed IB on both covers, pastedowns from a Latin manuscript on vellum (from a thirteenth- or fourteenth-century copy of Thomas Aquinas, Commentary on the Ethics of Aristotle, 7.6.5-7.6.17), lacking title-page (supplied in later manuscript), joints cracked

This copy shows very close engagement with the text by an early reader. The notes are attributed to Cardinal Alessandro Farnese in a note on the flyleaf but there is no evidence that the book was in Italy during the sixteenth century (or indeed at all).

Ex libris Jobi Moschi Nivelluni [i.e. of Nivelles?], inscription at end dated 1587; label pasted to inside front cover with shelfmark(?) 8+9+16; bibliographical manuscript notes in French on flyleaves (early nineteenth-century); Bertram, 4th earl of Ashburnham (1797-1878), his red shelfmark 9.D on inside front cover, sale, Sotheby's, 3 July 1897, lot 1503 (sold in a half morocco case, no longer present); sold by Pickering & Chatto, 18 January 1901, letter loosely inserted; Henry Clements, of Killadoon, but this does not appear in his sale catalogue of 4 July 1966