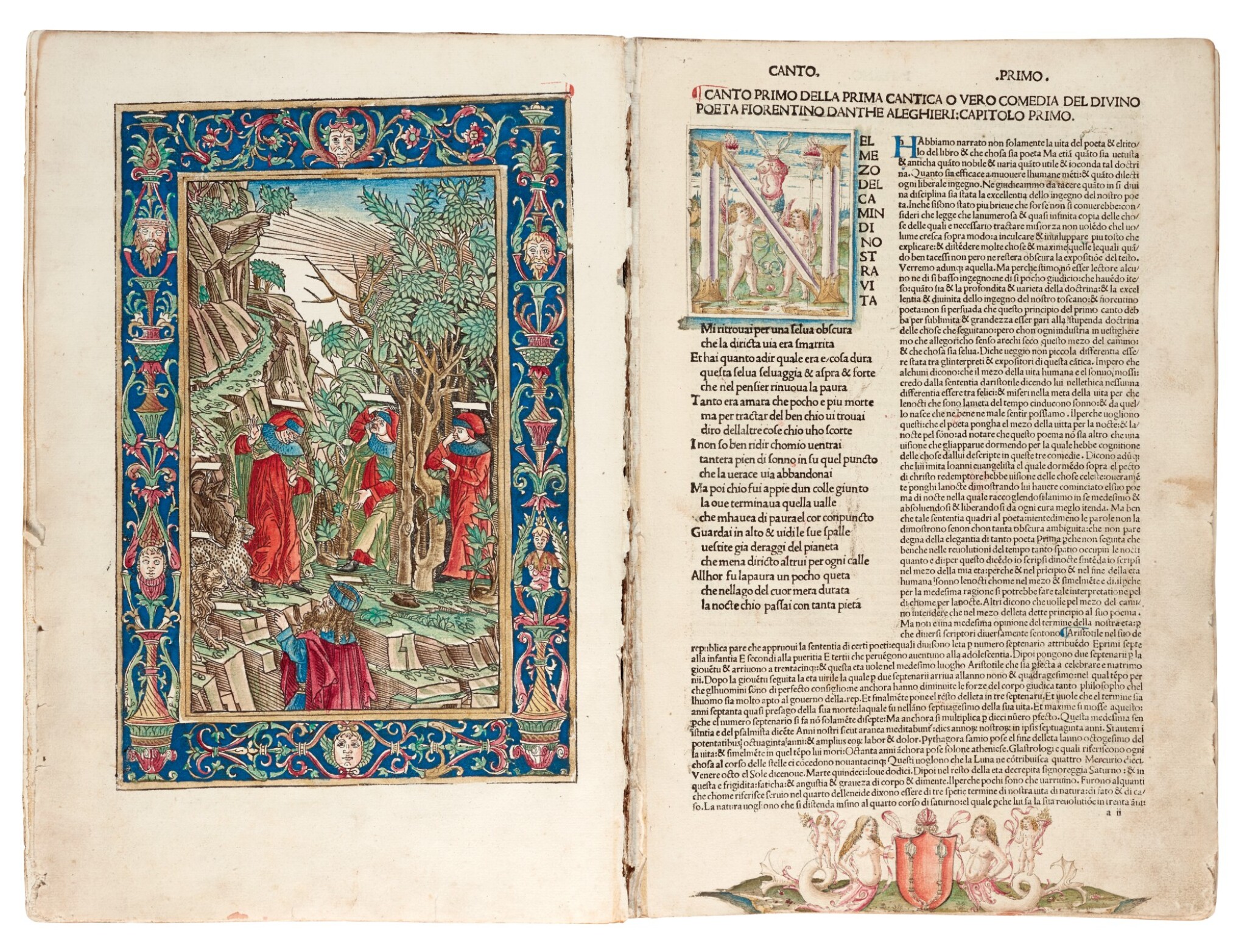 Median folio (341 x 225mm.), 309 leaves (of 310, without final blank), &8 a-i8 k6 l-r aa-mm8 nn4 A6 B8 C-L6, 68 lines of commentary plus headline, roman type, initial spaces, 68 woodcut illustrations within white-on-black woodcut borders ALL WITH EARLY HAND-COLOURING, all but one full-page, woodcut printer's device at end, a2r (start of Inferno) with 18-line initial N and armorial at foot, the initial accompanied by two putti holding torches and pointing to a suit of armour containing two maces or sceptres, the armorial at foot (possibly of the Migliorati family of Prato) containing two sceptres chained together, on a red shield supported by two mermaids and two putti holding cornucopias, aa2 with 10-line initial D inhabited by a putto with a cornucopia, aa3 (start of Purgatorio) with 18-line initial P in purple with a large snail and putto with two shields hanging from the top of the P, A1 (start of Paradiso) with 15-line initial L in purple on a blue and green ground with a garland and ribbons, smaller capitals and paraphs in red and blue, disbound, a few leaves lightly browned

THE FIRST SUBSTANTIALLY ILLUSTRATED EDITION OF DANTE'S DIVINA COMMEDIA, "The archetype of the Venetian illustrated editions" (BMC VII, p.971). The 1481 Florence edition had included some fine engravings (by Baccio Baldini after Botticelli) but only for the first few cantos; this edition contains illustrations for the whole of Inferno and Purgatorio, one per canto, and one at the start of Paradiso. The first fully illustrated edition would be printed in Venice in 1491, closely following the woodcuts for Inferno from this edition.

The woodcuts have been assigned to two different hands, one of whom also produced the woodcuts for Bonino's edition of Aesop earlier in the same year; they have also been linked to the artist Giovanni Antonio of Brescia. In the woodcuts for the Inferno, the action generally moves from top to bottom within each illustration, and for Purgatorio, from bottom to top. The one woodcut for Paradiso seems to be for a later canto, not Canto I, but was presumably placed at the beginning as it was the only illustration for the whole cantica. Manuscript copies of Dante were illustrated from the 1330s onwards, and again, many of these do not have complete sets of illustrations (though usually Inferno is fully illustrated). The majority of manuscripts were produced in Florence, where there was the largest demand for Dante's works, so the appearance of early printed editions in Brescia and Venice in the 1480s represents a change in the market for Dante beyond the bounds of Tuscany (though the possible early Tuscan provenance of this copy somewhat contradicts this idea). The illustrative cycle in this edition was an impressive strategy by Bonino which gave his book an advantage over those of his competitors, and which they subsequently imitated.

Giancarlo Petrella has studied the variants in this edition. This copy has f3_6 in the first state (in roman not gothic type), and h1_8 in the second state, with the correct headline "XI CANTO" on h1r and h1v, h1r with the two lines of text reset and the woodcut with the caption "Anastasio papa guardo" in letterpress in the centre (the first state has the caption as part of the woodcut), h8r with the headline "INFERNO" and the woodcut without a decorative border, and h8v with the start of Canto XIII (lacking in the first state and replaced with a repeated woodcut). The change to the woodcut on h1r was caused by its subsequent alteration for reuse on l5v (for Canto XIX), where it has a small woodcut of Pope Nicholas III's burning feet added in the centre, and the letterpress text put in its place to compensate for the alteration (indicating that the second state of bifolium h1_8 was printed after quire l). Also, l4-5 are in the second state with the correct headlines and with the altered woodcut from h1r (the first state has a different woodcut of Dante and Vergil on a bridge), and hh2_7 in the first state (though leaf hh2 is signed correctly). This is the typical make-up of most of the surviving copies of this edition (Petrella, p. 194).

The commentary by Cristoforo Landino was first printed in the 1481 Florence edition, and its influence was such that it was included in all subsequent incunabular editions (see lot 182 for the 1484 Venice edition), marking the change from medieval commentaries to a contemporary and humanist (even Neoplatonist) one. The text of Dante would not be subjected to further substantial revision until Pietro Bembo's Aldine octavo edition of 1502 - notably produced without any commentary at all.

This copy was disbound a few years ago (from a modern binding) in order for the woodcuts to be displayed simultaneously.

[Migliorati family of Prato?]; "Ex bibliotheca Jo. Huralti boistallerii", partially obscured inscription on a1r. Jean Hurault de Boistallé (1517-1572) was French Ambassador to Venice and he died in London. He owned a magnificent collection of Greek manuscripts now in the Bibliothèque nationale, and his library also contained a vellum manuscript of the works of Dante.