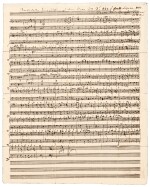 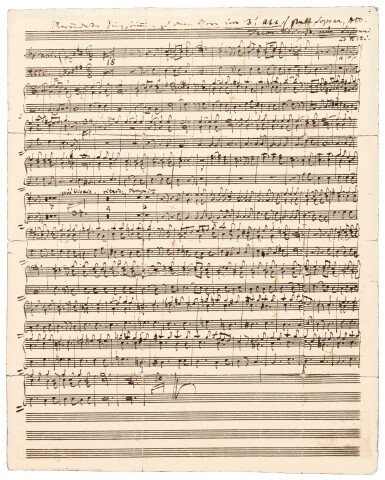 C.M v Weber, autograph manuscript of a chorus from his final opera, "Oberon", 1826

C.M v Weber, autograph manuscript of a chorus from his final opera, "Oberon", 1826

Autograph manuscript of part of the opera "Oberon", a late revision of a passage for the opera's premiere, with an explanatory note by the composer

Autograph manuscripts from Weber's operas are rare at auction.

Oberon was Weber's final opera, staged in English at Covent Garden on 12 April 1826, less than two months before his early death. This manuscript contains some of his final alterations for the premiere, which were not included in Schlesinger's first edition. Weber had made a draft of this chorus for four voices before travelling to England in the middle of February, which is the version he sent to the publisher.  The scene is where Roshana tried to seduce Sir Huon of Bordeaux, summoning her Arab slaves to serenade him. He repulses her advances and is lead away to be burnt at the stake.