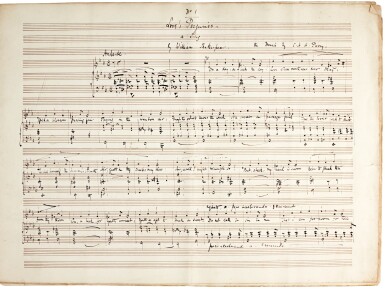 C.H.H. Parry. Autograph manuscript of a "Garland" of six Shakespearean and other songs, Op.21, 1873

C.H.H. Parry. Autograph manuscript of a "Garland" of six Shakespearean and other songs, Op.21, 1873

The autograph manuscript of his song cycle A Garland of Shakespearean and other Old-Fashioned songs, Op.21, signed twice ("C.H.H. Parry"), 1873

RARE: auction records for autograph manuscripts by Hubert Parry (1848-1918) comprise a single song in 1995 and three lots in 1979. Most of his autographs are in the Royal College of Music or the British Library. He was a central figure in British musical life: I was glad, Blest Pair of Sirens and, above all, 'Jerusalem', are much-loved icons of British music. This early Garland Op.21 sets three songs by Shakespeare and others by Daniel and Skelton. The Shakespearean texts come from The Passionate Pilgrim (No.17), As You Like It (V/iii) and The Tempest (I/ii).