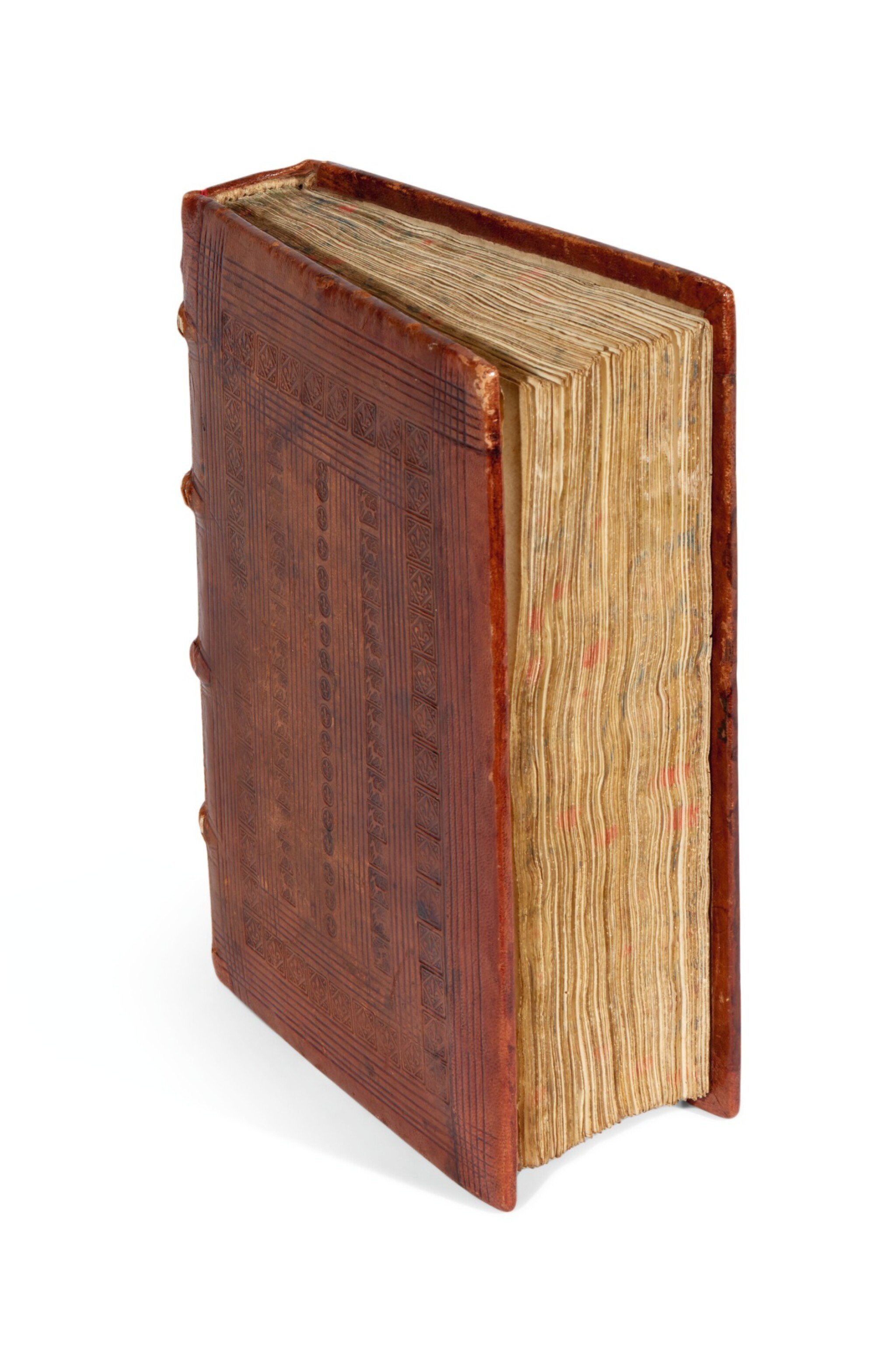 Book of Hours, Use of Rome, in Latin and Picard French, illuminated manuscript on vellum [Hainaut, mid-15th century]

Vellum, 191 leaves, c. 225x155mm, the pastedown and first three leaves ruled, otherwise originally blank, foliated in the lower corner from the first page of the calendar (another incomplete foliation in the upper corner is not used here), collation: mostly in quires of 8 leaves, quire signatures survive sporadically [a]–z starting after the calendar, with the heraldic leaf inserted and lacking single leaves, doubtless each with a miniature, after ff. 24, 67, 76, 80, 92, 113, 125, written with 16 lines (c.105x65mm), illuminated with 1- and 2-line champie initials and line-fillers, 3-line initials with foliate infill ONE-SIDED BORDERS THROUGHOUT, and 13 LARGE MINIATURES EACH WITHIN A FULL BORDER incorporating flowers, fruit, and birds (parrots, peacocks, pheasants, etc.) ACCOMPANIED BY A THREE-LINE FOLIATE INITIAL, bound in its (ORIGINAL?) LATE MEDIEVAL BINDING (not re-sewn in order to insert the heraldic frontispiece leaf, which in instead glued in): sewn on four tawed bands laced into wood boards covered with polished brown calf, finely blind-tooled with three small tools, two square, the third round: a fleur-de-ly in a lozenge, a quadruped, and a small fleur-de-lys, the outer edges very skilfully repaired, but overall in very fine condition, with (ORIGINAL?) EDGE-PAINTING of red and green scrolling plant designs on a gold ground

The miniatures are by two artists; one was responsible for the first miniature in the volume, and the first of the Hours of the Virgin (ff.13r, 38r): he used almost pastel colours of mauve and lilac along with deeper red and blue; the second artist was less refined but his compositions are spirited and engaging: his palette comprises generally richer, brighter, colours including a distinctive yellow with orange for shadows, a deep purple-blue, and he seems to have enjoyed depicting the reflective properties of metal armour. We are grateful to Dominique Vanwijnsberghe, who informs us that the second artist was probably also responsible for another Hainaut Book of Hours, now Brussels, KBR, MS 15080, perhaps written by the Mons scribe Jacquemart Pilavaine.

Overall, the condition of the book is remarkably clean, fresh and well preserved, with vibrant colours and gold in the decoration and crisp impressions of tools on the binding.

(1) Written for a woman (‘famule tue’, f.173r), doubtless in Hainaut (perhaps Mons?) for use in or near Binche (between Mons and Charleroi): the calendar and rubrics include Picard spellings (‘Vinchien’, ‘Franchois’, ‘tierche’, etc.), and the only local saints in red are Ghislain of Cambrai (9 October) and Nicaise of Reims (14 December); the second to eighth saints in the litany are the very rare group: Ursmarus, Erminus, Theodulphus, Ulgistus, Amoluinus, Abel, and Hydulphus, all of whose relics were at Binche. (2) The arms of a late 15th- or early 16th-century owner and his wife occupy a full page (f.4v), held by a lion rampant, its head in a helm with mantling, surmounted by a crest in the form of a bearded man wearing a cloak and conical hat with a feather: his arms are argent a bar azure in chief a leopard sable; hers are impaled on a lozenge, with her arms on the sinister side: argent three torteaux gules with a label of three points azure. (3) Owned in Paris in the second quarter of the 20th century: with two-page description with the ink stamp of ‘Librairie Ancienne Denis’, Paris, and a twelve-page description signed by Alexandre Benois (1870–1960), former Curator of Old Masters at the Hermitage Museum, Leningrad, who lived in Paris from 1927. (4) Private collection, Germany.