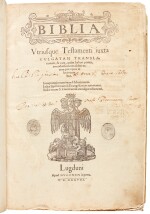 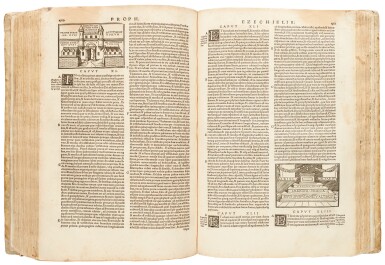 folio (338 x 230mm.), first word of title printed xylographically in a cartouche, woodcut device on title-page and at end, woodcut initials and illustrations, old vellum, a few manuscript annotations (including corrections to the text), title-page repaired at foredge, occasional browning, staining or light spotting, i6 torn in gutter without loss, BB8 misbound after BB1, rebacked with vellum

THE FIRST BIBLE TO CONTAIN HOLBEIN'S ILLUSTRATIONS. The woodcuts for the Old Testament were also issued by Trechsel under the title Historiarum veteris instrumenti icones ad vivum expressae (Mortimer, Harvard French 276), later in 1538. Holbein's woodcuts, possibly cut by Hans Lützenberger, were greatly influential in the development of bible illustrations and widely imitated in subsequent Lyon bibles.

The text used here by Trechsel was based on Robert Estienne's of 1528, though it is suggested that it was edited by Michael Servetus, who was employed by the Trechsels at the time this text was first printed by them, in 1532 (see Darlow & Moule, under entry 6112; Fulton, Servetus, 26-27).

"Pertinet ad locum santi Bonaventurae Civitatis [--]", convent of St Bonaventura, inscription on title-page, and two small library stamps, together with a warning to the reader that that book is full of errors; Hartung & Hartung (Hamburg), sale, 8 November 1983, lot 114