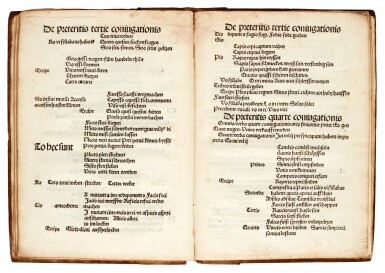 Aventinus (Johann Georg Turmair, 1477-1534) was tutor to the sons of the duke of Bavaria, for whom he wrote this Latin grammar. He also wrote a textbook on music theory for them (published 1516) and later wrote a history of Bavaria for the duke. This is considered one of the earliest German grammars as it contains text in both German and Latin, the German mostly providing translations of the Latin. It was first published on 15 January 1512 by Schobser in Munich, and subsequently printed on 1 July in Nuremberg by Weissenburger.