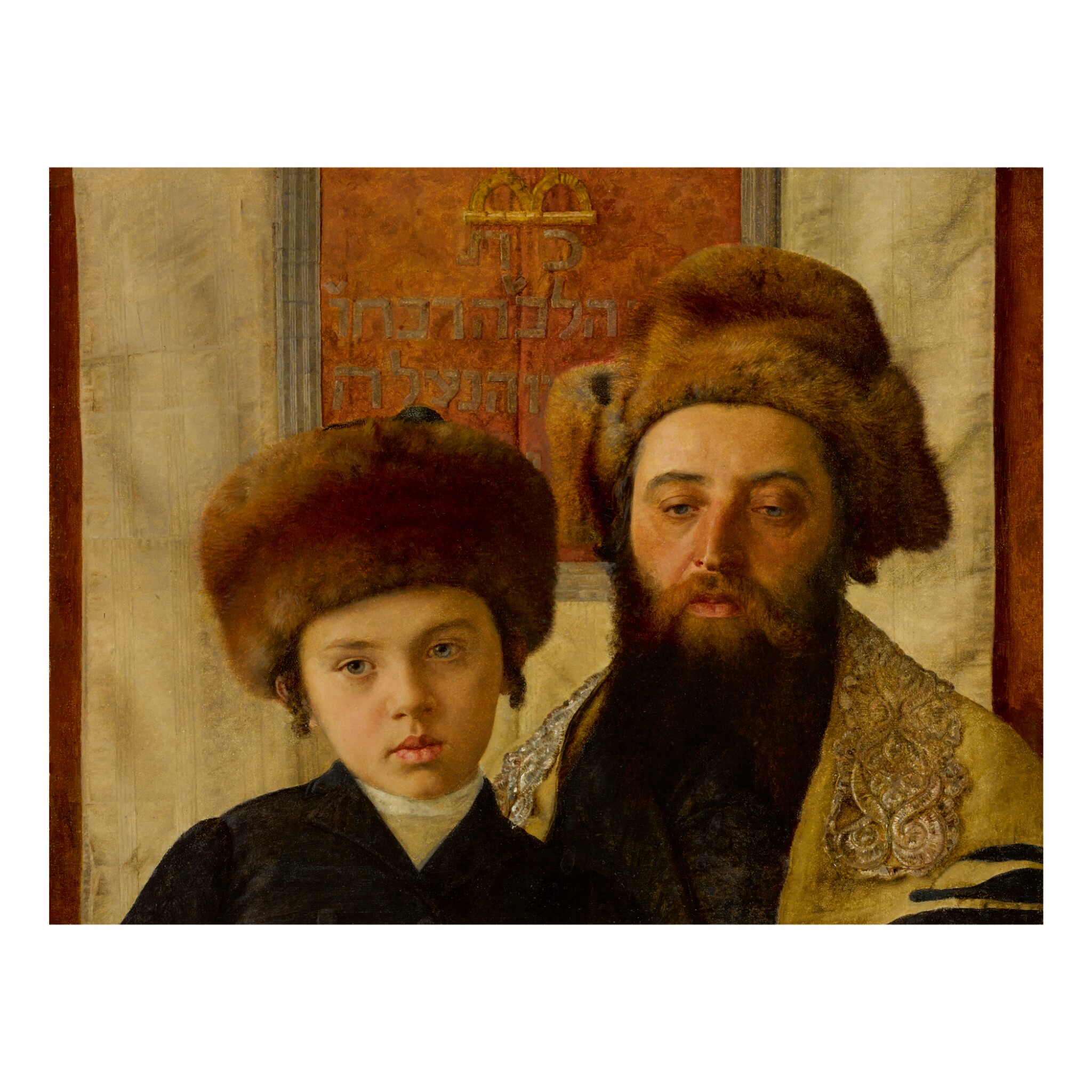 PORTRAIT OF A RABBI WITH A YOUNG PUPIL

The following condition report was kindly provided by Simon Parkes Art Conservation, Inc.: This work on panel is in very good condition. The panel is flat. The paint layer is stable, clean and varnished. Under ultraviolet light, one can see some tiny dots of retouching in the bearded man's hat on the right side. There are a few small dots of retouching on the extreme right edge in the lower right corner and in the center of the right side. There are a few spots of retouching in the dark coat of the bearded man towards the bottom edge. There is a small amount of retouching on the top edge in the upper left and along the extreme left side, probably due to some frame abrasion. There are a few spots of retouching in the child's dark coat. There is an area of uneven texture to the otherwise smooth paint layer in the lower center, about half an inch from the bottom edge. The reason for this texture is not immediately clear, but it is not unstable. The work should be hung in its current state.

The sensitive Portrait of a Rabbi with a Young Pupil reflects the deep respect and admiration that Isidor Kaufmann felt for Jewish life and religious figures whom he encountered during his summer visits to the shtetls in the Pale of Settlement in the early 1900s.

In the present work, a dignified young Rabbi and his pupil are posed before an embroidered Torah Ark curtain. The closeness of the two figures, the child leaning slightly in towards the older man, suggest that they are possibly a father and son. Behind them, the beige and crimson velvet curtain embroidered in silver and gold thread, envelopes the two figures in an atmosphere of intense holiness. Both the solemn Rabbi and the young child gaze downwards in a moment of intense spirituality. The embroidered letters Kaf Tav (Keter Torah, Crown of Torah) are precisely centered above the two figures, symbolizing their devotion to a life based on Jewish faith and religious practice. The luster of the painting is enhanced by the richly embroidered collar of the man’s Tallit, the Atara, which stands out from the cream-colored fabric of the Tallit itself. Details such as this, as well as the exquisite portrayal of the soft skin tones, the texture of the Rabbi’s dark beard, and the majestic fur shtreimels, create a remarkable sense of realism. In another second, we expect the Rabbi to lift his eyes and begin to speak.