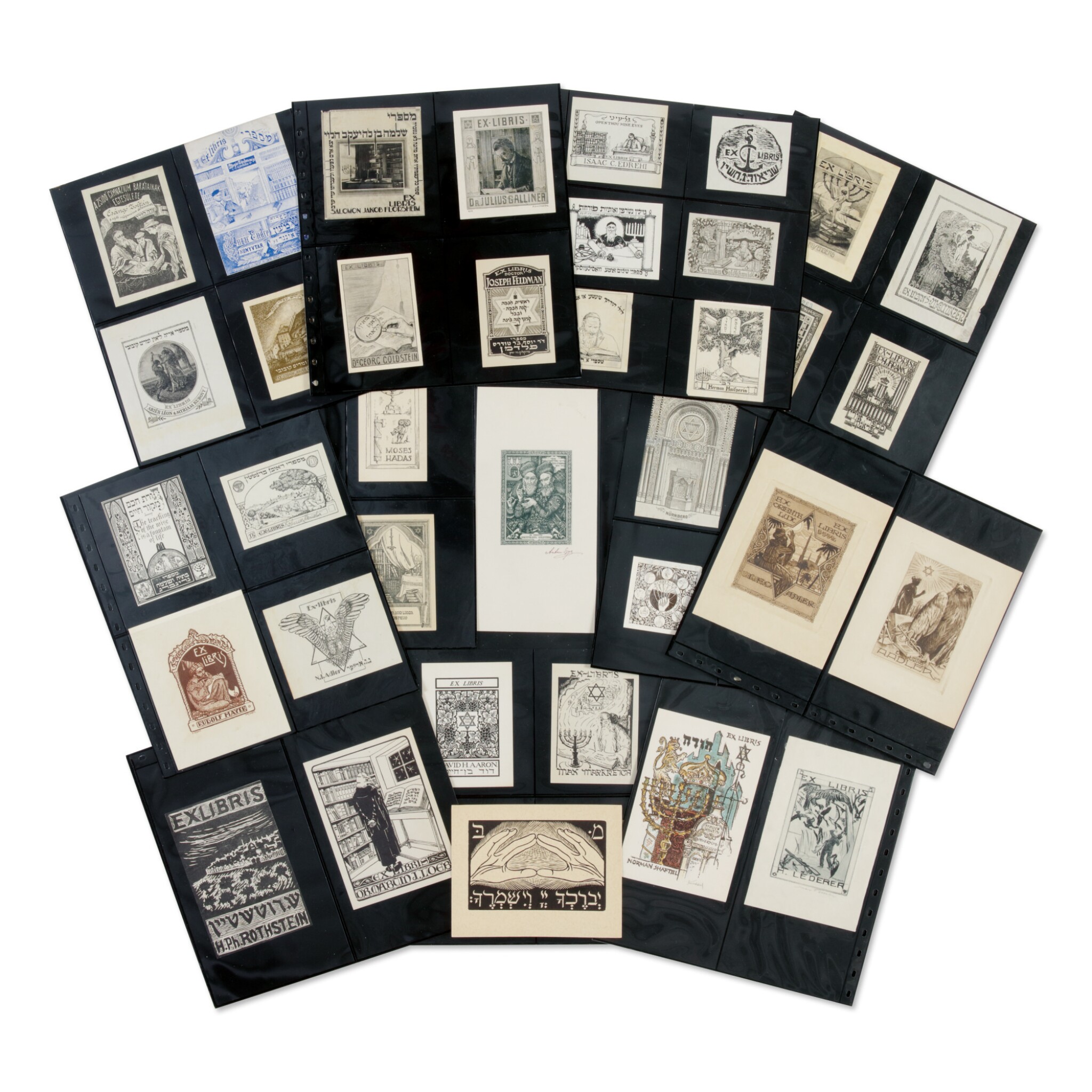 429 bookplates (ranging in size from 1 1/4 x 2 1/4 in.; 33 x 55 mm to 9 1/2 x 5 3/4 in.; 242 x 145 mm) on paper; text in English, Hebrew, German, French, Yiddish, Dutch, Danish, Hungarian, and Russian in various scripts (Latin, Modern Hebrew, Paleo-Hebrew, Cyrillic); most in black and white, some printed in color (a few with handwritten inscriptions); featuring a variety of motifs, including coats of arms, Stars of David, portraits of famous Jewish figures (Maimonides and the Gaon of Vilna), synagogue scenes or buildings, ritual objects, landscapes, and, of course, libraries. Most in good condition, some with signs of wear, aging, and water damage; a number bear remnants of the paper pastedowns to which they had previously been glued. Housed in two entirely handmade cobalt blue SAFE brand (“Favorit Skai”) 14-ring albums with a gold trim strip on the front of each, plus one loose set of plastic sheets; each ex libris in its own plastic sleeve and each album in its own matching blue slip case, slightly scuffed.

A substantial selection representing a unique genre within the Jewish book arts.

A bookplate (known in Latin as “ex libris”) is generally a slip of paper on which appears the name of a book collector and which is most often glued to the inside cover of a volume to indicate ownership. Ex libris first came into use prior to the invention of movable type but became much more popular in the fifteenth and sixteenth centuries. The first bookplate to feature Hebrew characters was created before 1504 on behalf of the German Renaissance humanist Willibald Pirckheimer (1470-1530), and probably the first Jewish book collector to commission an ex libris was Isaac Mendes of London in 1746. With the passage of time, and especially starting in the late nineteenth century, more and more Jews and Jewish institutions had bookplates created for their libraries in a variety of sizes, languages, and artistic styles.

A list of the bookplates in this collection is available upon request.

James P. Keenan, Bookplates: The Art of This Century: An Introduction to Contemporary Marks of Ownership (Laredo, TX: Cambridge Bookplate, 2013), 45-72.