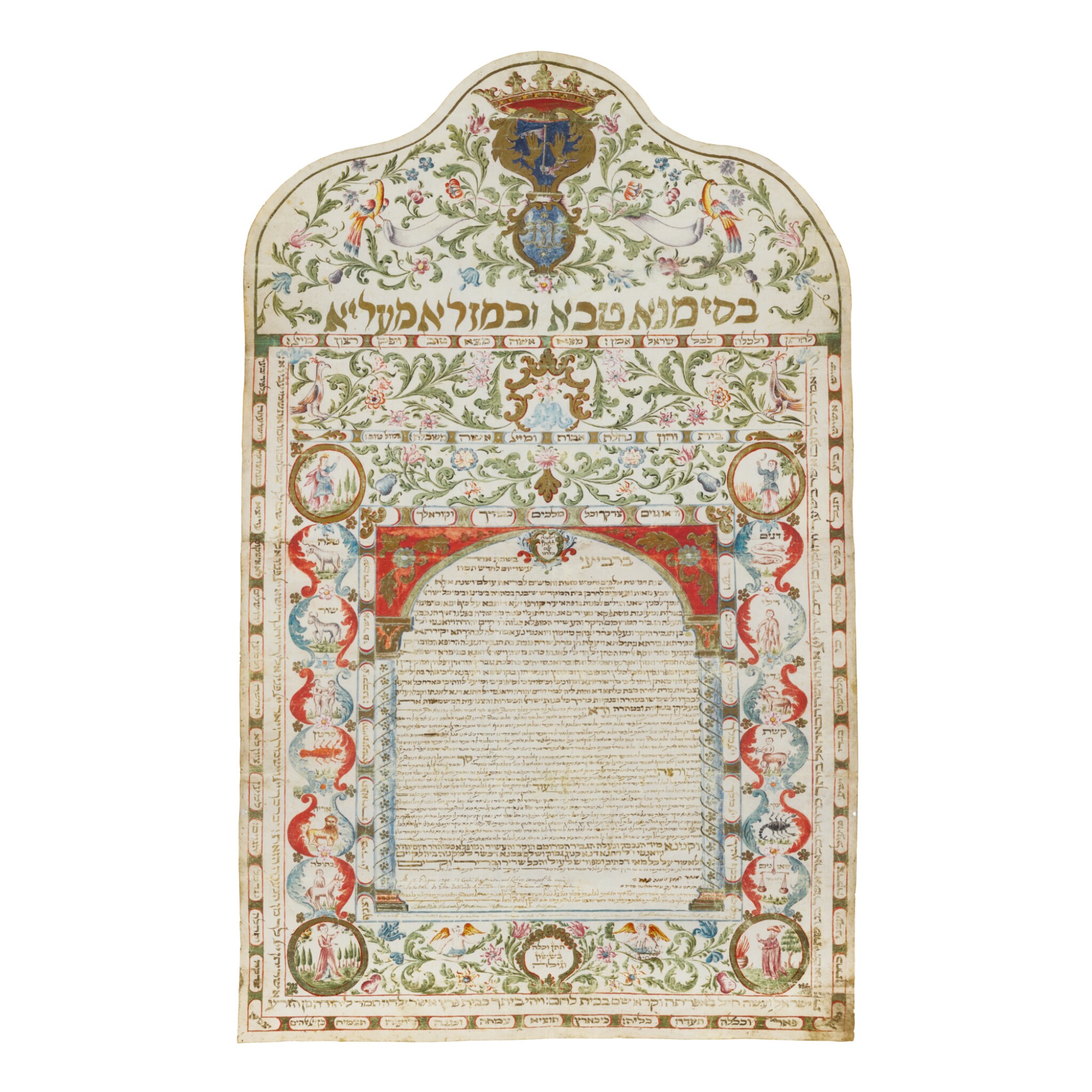 Ink, gouache, and shell gold on parchment (34 3/4 x 21 3/4 in.; 883 x 554 mm); written in Italian Hebrew square (text body) and cursive (dowry) scripts in brown ink on thirty-seven long lines; ruled in blind; witness signatures, Julian date, additional Hebrew affirmation, and groom signature below. Tapered upper edge; cartouche and family emblem surmounted by an ornate crown; floral decorations with birds and putti interspersed throughout; text within archway supported by two columns and surrounded by labeled illustrations of the twelve signs of the zodiac with four additional vignettes at the corners. Minor creasing and cockling; ink and gouache flaked and faded in places; small tears and slight soiling in outer edges; two minor repairs in right outer edge; stamped over putto near foot at right. Matted, glazed, and framed; not examined outside of the frame.

This magnificent marriage contract records a wedding in one of the major centers of ketubbah decoration outside of Italy: the Greek island of Corfu. Because this island was under the protectorate of the Republic of Venice from 1387 until 1797, ketubbot created in Corfu were strongly influenced by the popular Venetian models of decorated marriage contracts. In the present lot, for example, the corner medallions contain representations of the four seasons: beginning at top left and proceeding counterclockwise are Fall, Spring (a woman holding a flower), Winter (a man warming himself by a fire), and Summer (a woman pointing to stalks of wheat with a sickle in her hand). Likewise, the signs of the zodiac appear in the foliate cartouches on either side of the text, beginning at top left with Aries, the sign for the first month (Nisan), and proceeding around the border counterclockwise, ending with Pisces, the sign of the last month (Adar). Lastly, the characteristic inscriptional border features familiar, wedding-appropriate verses from Proverbs (18:22, 19:14), Ruth (4:11-12), Numbers (6:24-27), and Isaiah (61:10-62:3), with every word or phrase in the outer margins set decoratively in an oval frame.

Prominently placed at the top center is an elaborate decorative cartouche featuring a double coat of arms: a hand holding a flag (the emblem of the Vivante family) surrounded by two hands in the formation used during the priestly benediction (the emblem of the Cohen family). Beneath this, a slightly smaller cartouche displays the initials of the bride and the groom.

The text of this ketubbah includes at least two interesting features that are unique to marriage contracts from Corfu. First, two different dating systems are used: the standard Anno Mundi (years since Creation) count is followed by the number of years since the destruction of the Second Temple. Second, the text of the dowry, written in a smaller semi-cursive script, occupies more than half the document and lists at length and in great detail the various items brought into the marriage, together with their monetary values.

Elaborately decorated marriage contracts form Corfu rarely come to market. The present ketubbah is a superb witness to the traditions and artistry of an illustrious early modern Jewish community.