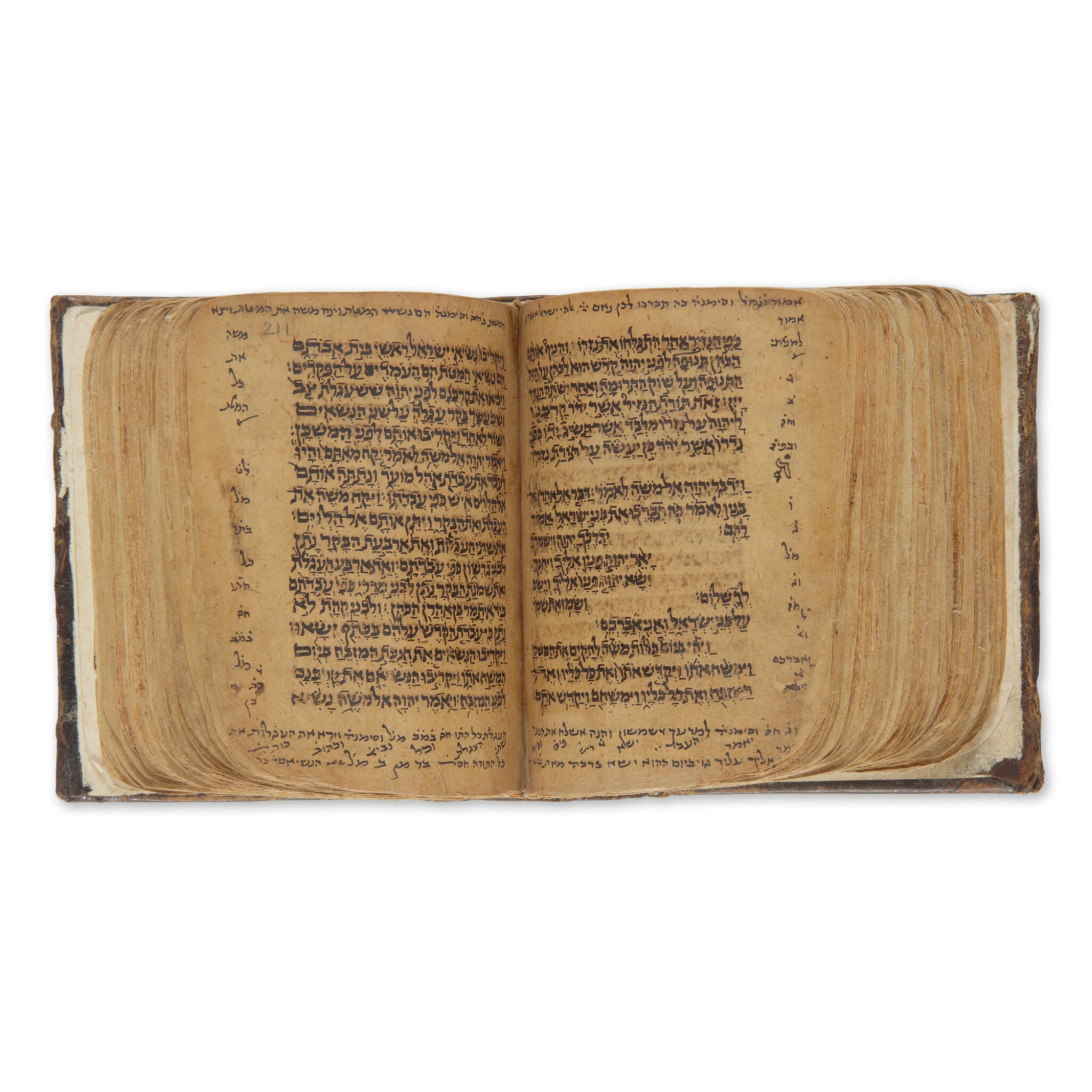 One of the only known pocket-size medieval Yemenite Bibles.

Rabbinic law requires that a Torah scroll be written without punctuation, vocalization, or accentuation in order to be considered fit for ritual use in the synagogue. Words are separated by spaces, paragraph divisions break up the flow of the text, and four letters (alef, he, vav, and yod) are frequently used to mark certain vowels, but even with these devices, the correct pronunciation and parsing of the biblical text into intelligible units is not readily apparent from its appearance in a scroll. Instead, Jews in antiquity relied on inherited reading traditions, passed down orally from one generation to the next, in order to understand the Bible.

In the early Middle Ages, not before the sixth century but also not later than the seventh, systems of committing these reading traditions to writing in biblical codices (not scrolls) developed in Palestine, Babylonia, and eventually specifically in Tiberias (Palestine). The Tiberian system would, with time, become the standard one used throughout the Jewish world to record the vowels and accents of the Hebrew Scriptures.

In addition, lists of information containing the details of the consonantal skeleton of the Bible, as well as its proper vocalization and accentuation – collectively known as the Masorah (lit., tradition) – were drawn up in order to ensure that scribes would copy the text correctly. The tradition of Aaron Ben-Asher (first half of the tenth century), scion of a prominent family of Tiberian Masorah scholars, was considered particularly authoritative, especially after Rabbi Moses Maimonides (1138-1204) wrote of his decision to use a Bible edited by Ben-Asher (the legendary Aleppo Codex) as the exemplar for a Torah that he himself copied.

While the Jewish community of Yemen, whose roots stretch back to antiquity (and possibly to Second Temple times), had long used the Babylonian (supralinear) system of vocalization and accentuation when producing Torah codices, it, too, gradually adopted the Tiberian system, probably under the influence of Maimonides, whom Yemenite Jews revered as a great halakhic authority. Because of the high degree of exactitude with which Yemenite biblical manuscripts, known as tijan (sing., taj; Arabic for “crown”), were copied, as well as their adherence to the prescriptions of the Masorah, modern researchers consider these volumes to be valuable witnesses to the vaunted Ben-Asher tradition. Indeed, the famous Bible scholar Mordechai Breuer saw the fact that the eclectic version of the Bible that he had edited turned out, post facto, to match the tradition reflected in tijan as proof positive of the soundness of the methodology he had employed in making his editorial determinations. The present lot is a miniature manuscript taj comprising almost the entire Pentateuch, lacking only approximately twenty-four folios (with four folios at the end of the volume, comprising Deut. 32:50-33:12, filled in by a nineteenth-century hand).

A number of special features mark this manuscript as characteristically Yemenite. First, the biblical text, its vocalization, and its accentuation all follow the prescriptions of Yemenite tradition. Examples include the use of the plural form va-yihyu (they were), rather than the singular va-yehi, in Gen. 9:29 (see f. 14r) and the spelling of the word dakka (crushed) in Deut. 23:2 with a final alef, rather than a he (see f. 305r). Second, the scribe was scrupulous to lay out the biblical text, especially the songs, in consonance with Maimonides’ prescriptions. This means that the last two lines of the Song of the Sea (Ex. 15:1-19; see ff. 108r-109r) each split their text into two blocks separated by an empty space and that the Song of Moses (Deut. 32:1-43; see ff. 320v-322v) is transcribed on sixty-seven, rather than seventy, lines. Third, he copied the text in columns of seventeen lines, since it is common Yemenite practice to this day to write Torah scrolls of fifty-one lines to a column, just as Maimonides himself had done. Thus, a subsequent scribe would be able to use every three pages of this model taj (17 x 3 = 51) as an exemplar for a single column of a new Torah scroll. Fourth, he carefully observed the ancient custom of writing certain letters in specific verses in a slightly unusual fashion. The most common of these is the so-called spiral pe (see, e.g., ff. 102r, 104r, 108v, 115r, 229r, 238v-239r, 276r, 294r, 299r), but also present are the bent alef (f. 71r), vav (ff. 13r, 14r), het (ff. 5v, 27r, 44r, 115v, 283v), kaf (ff. 13r, 14v, 17r), and lamed (ff. 5v, 11v, 13v, 254v, 306r), as well as the enlarged tsade (f. 287r). Fifth, the vocalizer employed the rafeh symbol, which takes the shape of a supralinear horizontal line, not only to mark the fricative realization of the letters bet, gimel, dalet, kaf, pe, and tav, but also to indicate instances where the letters alef (in medial position) and he have no consonantal value. Finally, on several occasions (see, e.g., ff. 40v, 60r), he used the Tiberian vowel signs segol and pattah interchangeably, presumably because, for Yemenites, the two symbols have the same phonetic realization: either [æ] or [a].

Perhaps the most unusual feature of this manuscript is its diminutive dimensions. Very few, if any, other surviving medieval Yemenite Bibles were designed to be pocket-size, making the present miniature codex an extreme rarity. Moreover, though the book is unsigned, it has been noted that the script here bears a “remarkable resemblance” to that of Benayah ben Saadiah ben Zechariah (d. c. 1484), the most famous Yemenite scribe and patriarch of a family of copyists. All told, ~40% of all dated, extant Yemenite manuscripts written between 1461 and 1540 (forty out of one hundred one) were produced by members of the Benayah clan. To this day, their books are highly regarded for both their accuracy and beauty of execution.

Written in a clear, bold hand, the present lot stands out both for its miniature format and for its staunch adherence to the Yemenite biblical manuscript tradition.

Sotheby’s is grateful to Shlomo Zucker for providing information that aided in the cataloging of this manuscript.

David Stern, “On the Term Keter as a Title for Bibles: A Speculation About Its Origins,” in Shmuel Glick, Evelyn M. Cohen, and Angelo M. Piattelli (eds.), Meḥevah le-Menaḥem: Studies in Honor of Menahem Hayyim Schmelzer (Jerusalem: JTS-Schocken Institute for Jewish Research, 2019), *259-*273.