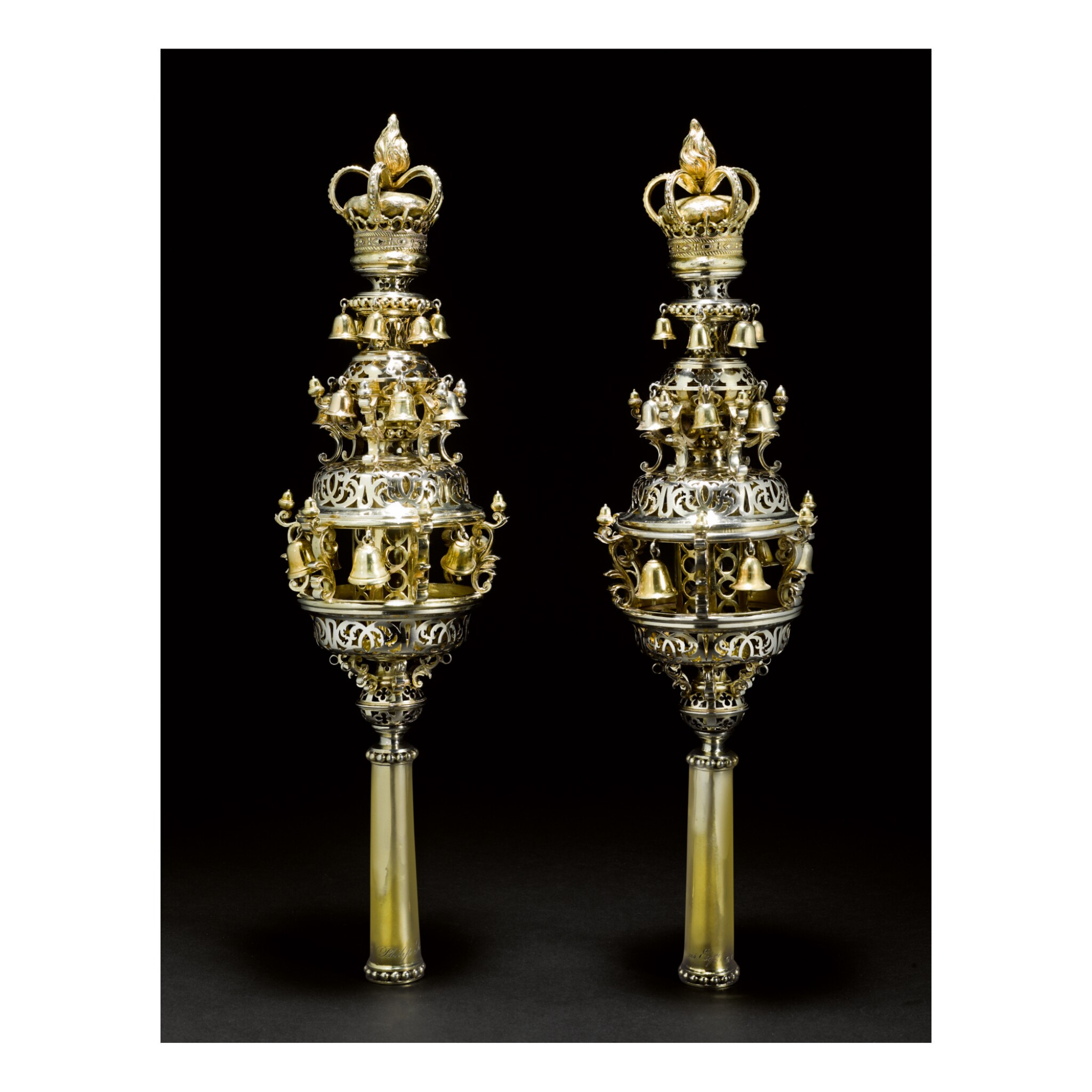 the plain staves with bold beaded borders, the first tier with two domes pierced with foliate scrolls separated by scrolled brackets with acorn finials and a cylinder pierced with circles, the second tier with similar brackets surrounding pierced knops, a third tier with bold beading, all hung with gilt bells, below well-modeled crowns with simulated velvet caps and ermine bands, the base of the staves engraved "Philip Salomons, Esq."

One with lead solder repairs to beads below crown, posts rethreaded at top, one acorn missing, several bells missing and many of later date, apparently later gilded throughout, but lightly so now have a parcel-gilt appearance, most sections hallmarked including crowns.

Silversmith Edward Aldridge entered his first mark in 1724 in Foster Lane. His shop, at the sign of the Golden Ewer, had several locations in Foster Lane and in Lilley Pot Lane, with various partners; in 1742 he was tried for counterfeiting marks at the instigation of his own guild, but was cleared by the jury "contrary to the opinion of the Court". His shop specialized in pierced work, particularly cake baskets, that were sold through retailers such as Parker & Wakelin.

This piercing skill can be seen on the offered lot and on two smaller pairs of finials of a similar model, 1761 and 1764, which have also descended at Central Synagogue. The three pairs of Torah Finials and the associated Torah Pointer (lot 4) would have been among the last things he produced, as his widow entered her own mark when she took over his workshop in 1766-67.

Philip Salomons (1796-1867) was the son of Levy Salomons and Mathilda Metz. He traveled in America when young and even became a naturalized American citizen in 1826, but then resumed his British citizenship. Philip was a financier in the City of London, like his father and his younger brother Sir David Salomons, who in 1835 became the first Jewish Mayor of London. Philip was a Warden for the New Synagogue, but also had a private rooftop synagogue in his house in Hove, adjacent to Brighton.

He served as a Justice of the Peace and as High Sheriff and Deputy Lieutenant for the county of Sussex. He married in 1850 Emma Abigail Montefiore, daughter of Jacob Montefiore, “merchant of Sydney, New South Wales”, and niece of Moses Montefiore; the bride was 17 and the groom 54. However, she died just nine years later, leaving him with several children. Her husband only survived her by eight years, and on his death their children were entrusted to the care of his brother, Sir David; Philip’s son David succeeded his uncle as 2nd Baronet.

The advertisement for Philip’s sale in 1867 described him as “that well-known Amatuer” and lists several Sèvres vases and cups, oriental vases “from the Duke of Sussex’s collection”, mounted rock crystal pieces, gold snuff boxes and bonbonnières, French clocks, and “tables and pedestals of rich Buhl and marquetrie” with plaques of pietre dure and Sèvres – a taste that was shared with his contemporaries the Rothschilds, in buildings such as Mentmore and Ferrières.

Philip’s sale included “ancient manuscripts in finely chased covers”, which probably belonged to the collection for which he is best known today, that of his Judaica. Philip Salomons was one of the first serious collectors of antique Judaica, particularly in England, collecting not just English items but representative European forms as well. After his death, a large portion of his collection was acquired by Reuben D. Sassoon and formed a specific section of the great 1887 Anglo-Jewish Historical Exhibition at the Royal Albert Hall (numbers 2031 to 2065). Pieces listed there include a silver ark, ewers and lavers, scrolls with mantles, finials and breastplates, finials on their own, Esther scrolls, a Passover dish, a “Citron box”, and reading desk covers.

Several pieces from his collection are known today, helped by his habit of engraving his name on items: