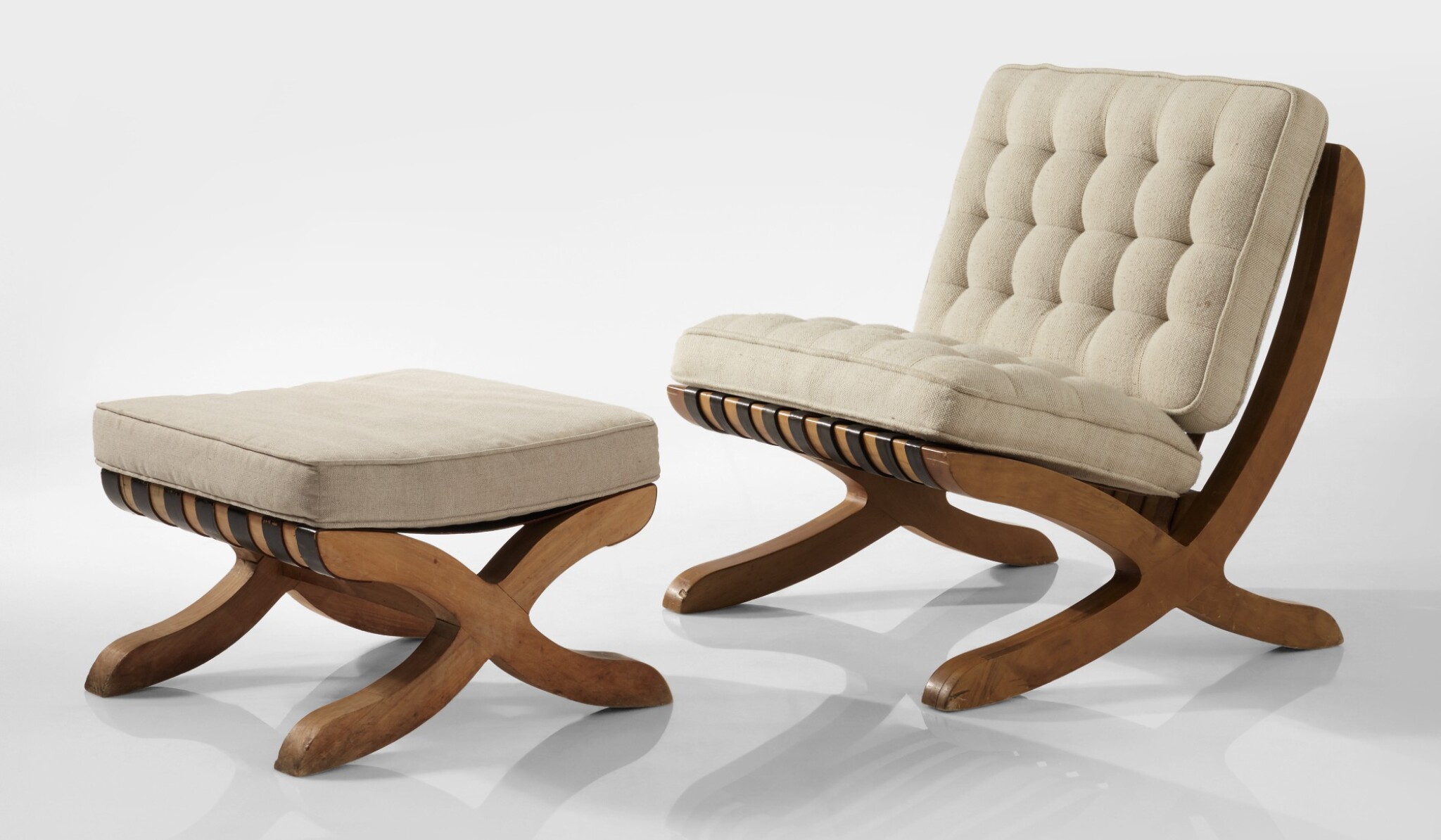 the chair number 1 from an edition of 2

the stool number 1 from an edition of 6

Overall in good condition. This lot provides collectors with an opportunity to acquire complementary works that once inhabited Luis Barragán’s Casa Eduardo Prieto López. The chair and stool have been recently professionally refinished to protect and restore the original texture and brightness. The wood presents with warm golden hues when seen in person, and presents with light surface scratches, indentations concentrated to the edges and slightly more pronounced abrasions to the wood concentrated to the feet of both pieces, all consistent with gentle use. The side edges of both pieces present with scattered and small signs of prior restoration that are not visually distracting. The leather straps on the backrest and seating area of both works is most likely original and presents with expected signs of age, namely light crackling to the leather concentrated to the edges and areas of minor discoloration. One strap on the backrest of the chair presents with a slightly more rugged surface. One strap on the ottoman has recently been professionally reglued to ensure the structure’s stability and is now stable. All three cushions appear to have been recently replaced in a manner that is consistent with the original design and display a very good condition overall, presenting three light stains to the corner of each cushion consistent with gentle use and not visually distracting.

Commissioned directly from the artist by Prieto López, Mexico City, 1959

This exceptional ensemble of furniture comprising a cabinet, table lamp, low table, stool and chair is inextricably connected to the house for which they were designed, the well-known Casa Prieto López. This remarkable private residence was built by legendary Mexican architect and Pritzker Prize winner Luis Barragán (1902-1988) and erected in 1950 as part of a larger project, the Jardines del Pedregal, located in southern Mexico City.

The present owner of the suite, a direct descendant of the original owner of the house, explained that his grandfather bought the land in 1946 and was later persuaded by the architect to build a house on the newly-acquired plot of land. “Their agreement was that he would not charge for the project but that my grandfather would build the house that he designed,” he explains. “It was a win-win situation for both.” In the eyes of many architectural historians, Casa Prieto López and the Jardines del Pedregal project are often considered as important milestone in Barragán’s career that foreshadowed later important projects such as the Torres de Satélite (1957-1958) and the Cuadra San Cristóbal (1966-1968). For this specific residence, Barragán prioritized the design of the exterior space, first designing the garden and then the house, followed by the furniture, lamps, and even silverware. Casa Prieto López, like many of the architect’s most successful works, is an exploration of the dialogue between interior and exterior as well as the relation between tradition and modernity, best exemplified here through the house’s large windows, high ceilings and restrained furnishings. Together, those elements convey an atmospheric quality and an impression of stillness often associated with his architectural creations, and which directly echo the peaceful nature and raw volcanic grounds surrounding the property.

Barragán was fully invested in the creation of all aspects of the house, simultaneously acting as the lead architect, landscapist, and furniture designer. As the latter, he devoted several years to the design of the residence’s core furnishings, carefully studying its scale and proportions in relation to the space. Most of the pieces were designed and built onsite in a workshop set up by the architect, in which carpenters built furniture according to his specifications. All of the furniture in the house was made with a rare wood referred to as sabino, or Mexican cypress, characterized by its rich texture, knots and reddish color. As exemplified by the present low table (lot 297), characterized by a sturdy and uncluttered structure, Barragán selected large wood boards which allowed him to create particularly robust forms and functional pieces. Cabinets (lot 296) similarly relied on simple construction, varying in size, height and length, and serving as complementary architectural elements fully incorporated into the home. The low table model in particular was also repeated in the interiors of other houses, including the Casa Barragán (1948), and constitutes a trademark design for Barragán’s work with furniture. The “Barcelona” chair and stool (lot 294) were produced slightly later than the rest of the group, towards the end of the 1950s. The chair in particular was developed upon the request of the original owner of the house, who considered purchasing the eponymous chair model by Mies van der Rohe. Yet the idea was quickly abandoned after the architect suggested developing his own version of the iconic model, but in sabino and with leather straps, making this example a particularly rare and statement-making piece within Barragán’s work as a furniture designer. Lighting was an equally primordial concern for him, and he favored table lamps rather than overhead lighting to emphasize the muted atmosphere of the house. The present example (lot 295) is the result of Barragán’s collaboration with the Mexican ceramist Hugo Velázquez, and was one of several related examples of white-colored table lamps in stoneware that were prominently installed around the house.

It is all the more exceptional that the group remained within the original family since their time of production in the 1950s. They form an enduring example of Luis Barragán’s unique vision of furniture design and its contribution to the face of mid-century Mexican architecture.