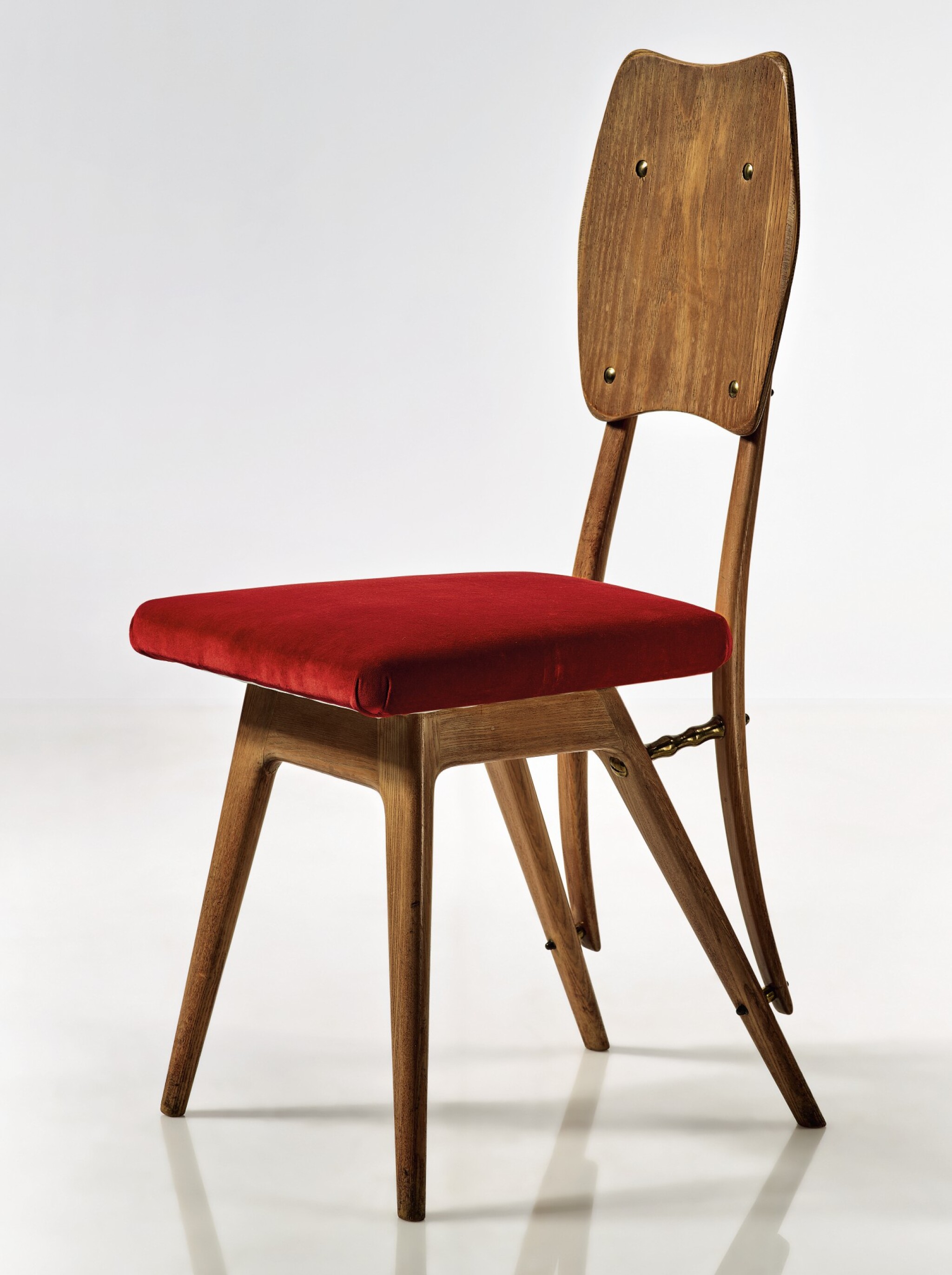 the model designed for the Casa Editrice Lattes, Turin, Italy

The present lot is registered in the library of the Museo Casa Mollino, Turin, as number CM 327-1.

To request a condition report for this lot, please email 20thcenturydesign@sothebys.com.

Thence by descent to the present owner, 1979

The present lot is registered in the library of the Museo Casa Mollino, Turin, as number CM 327-1.

Originally designed for the Lattes publishing house beginning in 1951, the chair is an essential component of one of Carlo Mollino's largest and most comprehensive commissions, which was finally completed by 1954. This compelling piece is somehow orphaned from that commission since it lacks a pair of connecting metal crossbars between the front and back legs as is the case with its counterparts in the group. It is possibly a prototype that was gifted to Riccardo Moncalvo, Mollino's most trusted interior photographer. It is a subtle work that exudes the confidence of an architect at the height of his creative powers.

All of Mollino’s production, whether architecture, interior design, or furniture stands apart in the last century for the way it is imbued with a wide range of personal interests from philosophy to fashion, aeronautics to eroticism while also resonating with a deep connection to the occult. This renders his work extremely complex to decipher.

The structure of this chair with a cartouche shaped back in molded plywood enlivened by exaggerated joint designs, harks back to previous one-offs, such as the chairs for the 1939 Casa G.A. and the 1946 Casa M3. This confirms that Mollino tends to work with the same typology time and again while always conjuring up up new visions. Besides his innovative solutions to bent plywood assembly, beyond his elegantly tapering wooden struts that successfully achieve the salient forms in tune with the 20th Century Modern idiom, Mollino deftly opens a link back into the 19th century with clever hints that are so subtle as to be almost hidden or fugitive. The aforementioned shield shaped back is but a cypher of the Belle Époque. Meanwhile, the ambiguously profiled brass joints take a step towards a Freudian universe so uncanny as to draw attention to themselves.

In the end Mollino manipulates the anthropomorphic condition of furniture and transcends it to attain an unknowable reality tinged with brooding surrealism and an oddly sweet but humorous strain of poetics.

Curator and specialist in 20th Century Italian architecture and design. Associate member of the Gio Ponti Archives since 2006.