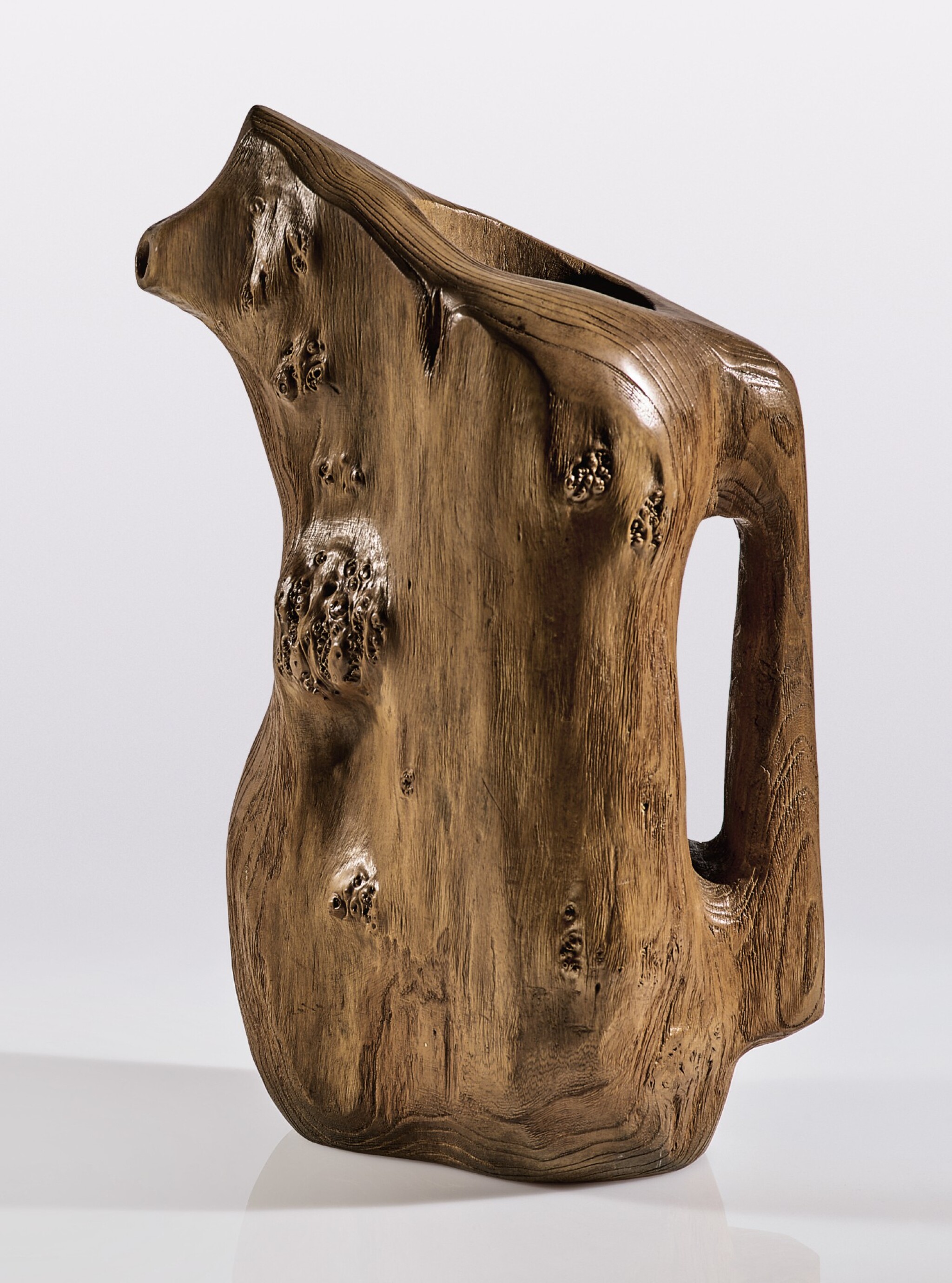 Overall in very good condition. When viewed in person, the wooden surface of the pitcher presents with slightly brighter hues when compared with the catalogue photography. A masterpiece of craftsmanship, possibly sculpted from the same wood piece, this large and decorative pitcher is one of the most stunning and largest pitcher examples produced by the artist. As part of the artist’s practice, the pitcher includes remarkable textural and burled details pictured in the catalogue illustration that are original to the wood. The elm surface presents with very light scratches concentrated to one side, as well as areas of slight darkening to the surface concentrated to the base and one side of the pitcher. A unique and well-preserved piece by Noll with monumental and sculptural quality.

Please note this lot is executed in elm and not sycamore as stated in the printed catalogue.

An Icon of Mid-Century Craftsmanship

“From the object to the piece of furniture, from the shape to the sculpture, only the wood expresses Noll’s line of thought subject to both the secrets and the unpredictable whims of his inspiration.”

The extraordinary ensemble of works by Alexandre Noll presented in this segment embodies the variety and versatility of his practice as a craftsman. From a rare, large-scale pitcher (lot 277) to a sculptural buffet (lot 278) and a cabinet (lot 280), as well as a set of six chairs (lot 279), this offering originating from a distinguished private collection is a testimony to Noll’s mastery of woodworking techniques and the unique body of work that he produced at the intersection of sculpture and furniture.

Nothing seemed to predestine Noll to art. Born in Alsace in Eastern France in 1890, he started working as a bank employee before being deployed to Salonique, Greece during World War I, where he was first introduced to wood engraving. Back in Paris, he decided to develop the technique and found early commercial success by designing umbrella handles for the iconic Bon Marché department store. He was also able to work on the creation of his own decorative objects and sculptures that he repeatedly exhibited at the prestigious Paris Salons from 1921 to 1942 as well as the Compagnie des Arts Français from 1943 onwards.

Noll used wood as his only medium and means of expression, using it for its elementary power and discovering all its virtues and charms through carving and experimentation. He famously claimed: “I don’t kill the wood, I obey it [...]; I try hard to make sure that my pieces have that primary quality, but I don’t think it is incompatible with other elements of beauty, like the precious quality of the material, the extreme care in execution and the fine finishes of decoration.” Following nature and the nuances of exotic and rustic woods, each of his masterful creations was directly inspired by nature, authentic and unique. He treated wood with passion and respect and refused to inflict the eternal wound of iron: his pieces of furniture were made without any hinge or nail and convey an impression of primitive force and timeless beauty, as best exemplified by the construction of the buffet (lot 284) and cabinet (lot 286).

Through his instinctive approach, Noll created a new language, made of abstract forms, solid volumes and powerfully rounded shapes, looking for answers in the wood. In the context of post-war France, where designers like Le Corbusier, Charlotte Perriand and Pierre Jeanneret made use of new materials and industrial means of production, one must appreciate Alexandre Noll’s authentic and in many regards radical approach to design and furniture-making. His contribution to both woodworking techniques and mid-century European art and design remains considerable and is rightfully celebrated among design collectors and mid-century enthusiasts alike.