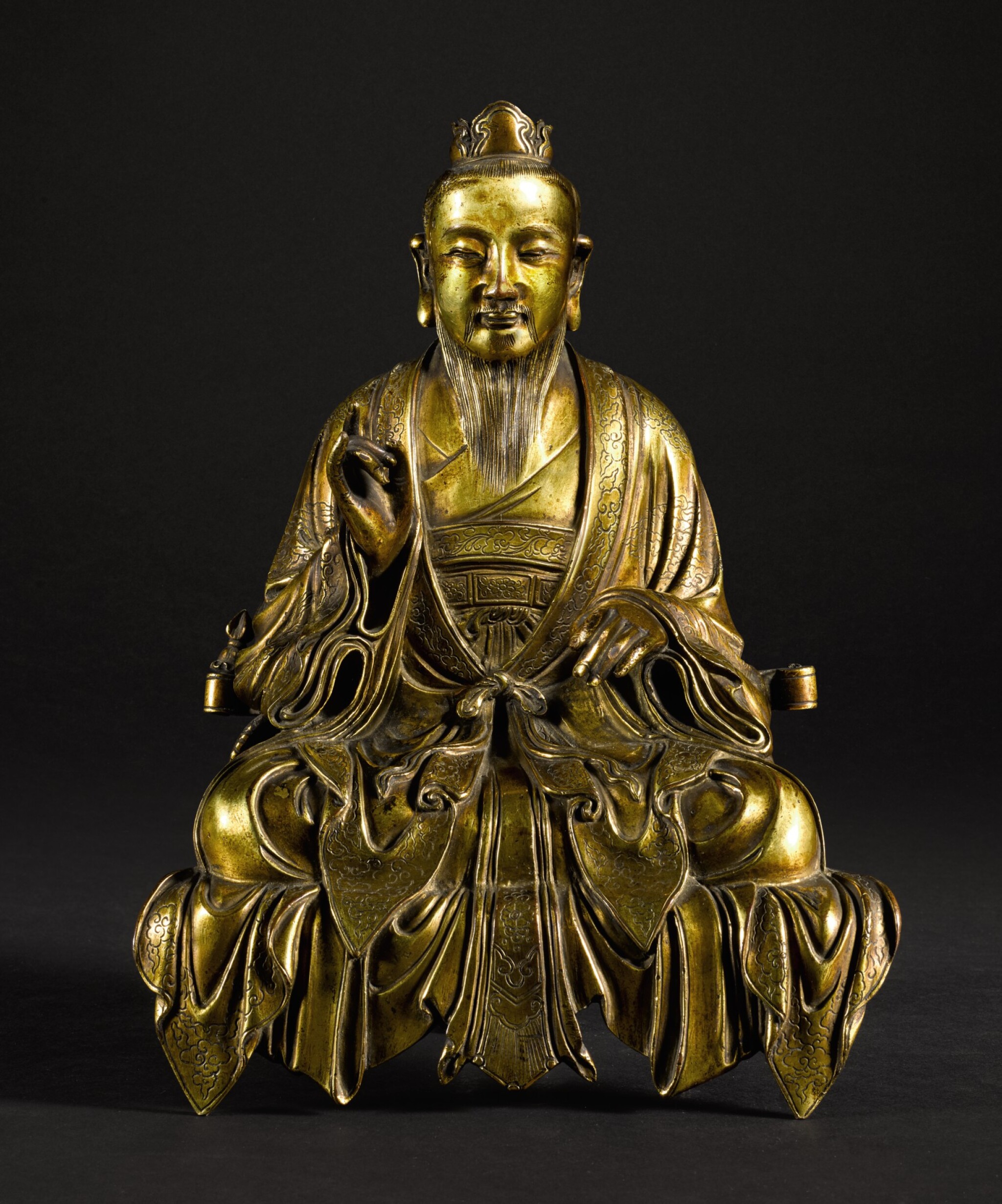 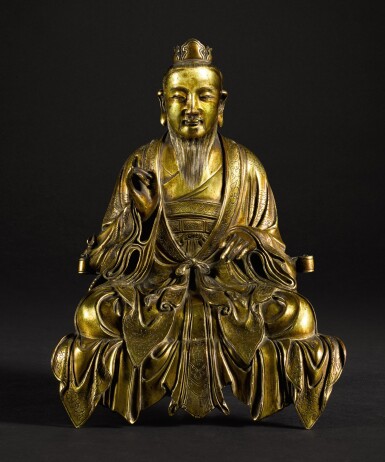 PROPERTY FROM A DANISH PRIVATE COLLECTION

A RARE GILT-BRONZE SEATED FIGURE OF A DAOIST DEITY

well-cast, seated with both hands raised in an animated gesture, dressed in a long fluid robe with finely incised ruyi scroll borders falling in voluminous folds over the legs, tied at the waist with a double knot, the well-defined face with a gentle smile, framed by neatly adorned hair gathered up in a Daoist lotus cap and a long pointed beard

This figure is heavily cast and richly gilt, with some light wear/scratches to the surface and nicks to the edges. The attribute to the left side of the figure, and the top of the hat are now missing.

In the family by descent.

This rare and well-cast figure most likely depicts one of the Three Purities (Sanqing), the embodiment of the Dao and the three highest deities in the Daoist pantheon. The Sanqing developed from the tripartite division of the celestial realms and first emerged in the Tang dynasty (618-907), when attempts were made to group Daoist deities in a coherent system. The Quanzhen sect (Complete Realisation sect) of Taoism understood the deities as representing the Celestial Worthy of Primordial Beginning (Yuanshi tianzun), the Celestial Worthy of Numinous Treasure (Lingao tianzu), and the Celestial Worthy of the Way and Its Power (Daode tianzun). As manifestations of the Three Energies and rulers of the Three Caverns (Sandong), they are considered the source of all life and knowledge, see Stephen Little, Taoism and the Arts of China, The Art Institute of Chicago, Chicago, 2002, pp. 229-231.

Gilt-bronze figures of the Sanqing from the Qing dynasty are unusual, and examples are more commonly known attributed to the Ming period (1368-1644). Compare for example a smaller seated figure of deified Laozi, also identified as the Celestial Worthy of the Way and Its Power, dated by inscription to 1438, and signed Chen Yanqing (active 15th century), in the Metropolitan Museum of Art, New York, included in the Museum’s exhibition Wisdom Embodied. Chinese Buddhist and Daoist Sculpture in the Metropolitan Museum of Art, New York, 2010, cat. no. 38, and sold at Christie’s New York, 21st November 1995, lot 493; another signed Chen Chanqing, sold at Christie’s London, 10th December 1979, lot 45; and a third, identified as the Celestial Worthy of Numinous Treasure, and attributed to the Yuan dynasty (1279-1368), sold twice at Christie’s Hong Kong, 1st May 2000, lot 751, and 29th November 2005, lot 1608.