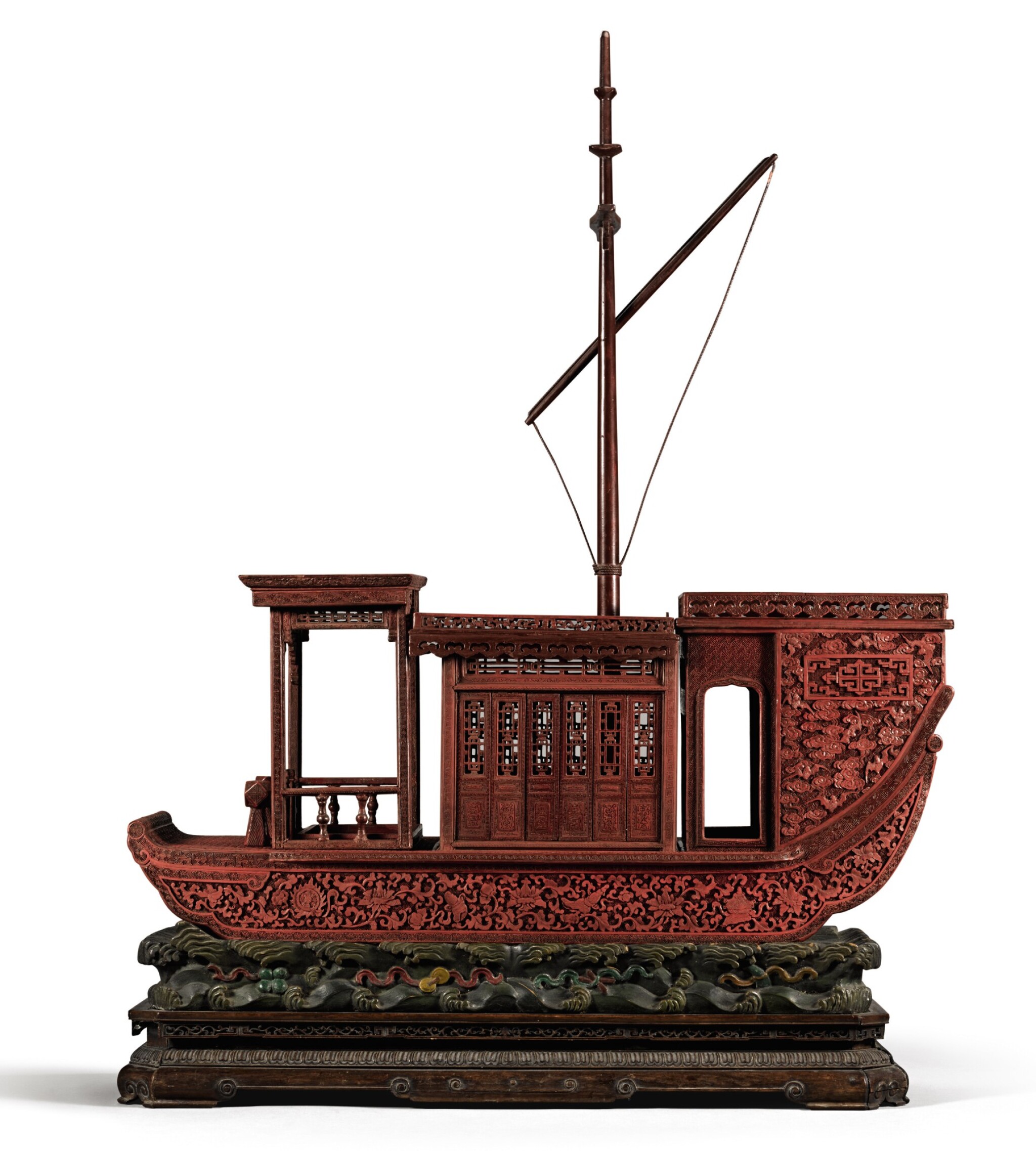 PROPERTY OF A DANISH PRIVATE COLLECTOR

modelled as a large boat, elaborately carved to the curved bough with baijxiang ('Eight Buddhist Emblem') interspersed with lotus blossoms borne on meandering leafy scrolls, the upper section mounted with three parts, one in the form of a pavillion, followed by a room with twelve doors reticulated and detailed with keyfret border, a larger door towards the front, and a backroom rendered in accordance to the curved silhouette of the boat and carved to the sides with a rectangular panel enclosing a stylised geometric design amidst bats flying amongst ruyi clouds, the exterior further modelled with four small drawers, carved wood stand

This rare lacquer boat has restoration to both the left and right side pendent ruyi bands above the doors in the middle section, age cracks to the top deck middle and top deck bow section, restoration around the ruyi balustrade at the top section of the stern, re-freshing of the lacquer on the doors, further small areas of lacquer re-freshing and repair around the boat, minor nibbles to extremities and some losses to the original structure. The mast section is a later wood addition.

Skilfully fashioned in the form of a boat, this box exemplifies the Qianlong Emperor’s penchant for extravagant and unusual playthings. With its tall rising stern and sophisticated design of roofed structures, this boat recalls the magnificent touring boats used by the emperor during his inspection tours of southern China. Such a boat is depicted in the scroll painting The Qianlong Emperor’s Southern Inspection Tour, by the court artist Xu Yang (active ca. 1750- after 1776), dated in accordance with 1770, in the Metropolitan Museum of Art New York, accession no. 1988.350a–d.

Lacquer models of boats are unusual, and those of such large dimensions are rare; a slightly smaller boat in the Palace Museum, Beijing, is illustrated in Gugong Bowuyuan cang diao qi [Carved lacquer in the collection of the Palace Museum], Beijing, 1985, pl. 362; another, was sold in our Hong Kong rooms, 27th April 2003, lot 289, and again in these rooms, 15th May 2019, lot 82; a pair was sold in our New York rooms, 19th September 2001, lot 43; and a further boat, in the collection of the Zhejiang Provincial Museum, Hangzhou, is illustrated in Wang Chunfa ed., Zhongguo guojia bowuguan guancang wenwu yanjiu congshu. Za xiang juan [Studies of the collections of the National Museum of China. Miscellaneous], Shanghai, 2018, pl. 19-2. See also a boat with the hull carved with dragons, sold in these rooms, 19th December 1980, lot 242.