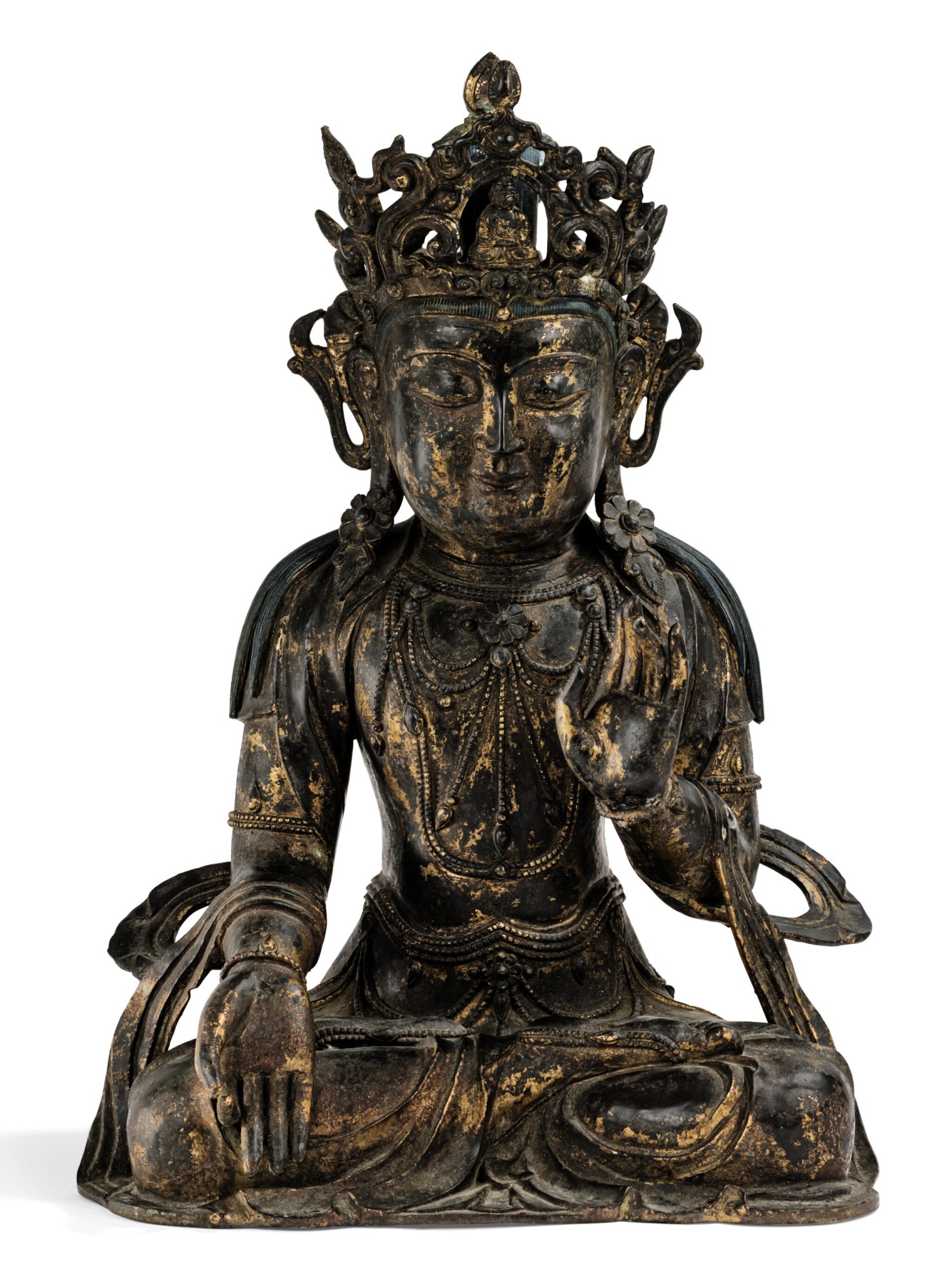 cast seated in dhyanasana with the right hand lowered in varadamudra, while the left held in abhayamudra, dressed in loose robes elaborately decorated with floral borders, further embellished with beaded jewellery around the chest, the face with serene expression and downcast eyes, the hair gathered into a high chignon save for two long plaits falling off the shoulders, framed by an elaborate headdress in openwork centred by the Amitabha Buddha

There are overall flakes/losses to the gilding and lacquered areas, and nicks to the extremities. Some discolouration can be seen on the chignon. One tip of the crown (second from the left) was possibly replaced.

Impressive for its large proportions and crisp casting, this figure appears to depict Avalokitesvara, the bodhisattva of Compassion and Mercy, recognisable from the small figure of Amithaba Buddha in his crown. Adorned with luxurious necklaces and earrings and a tall floral crown, the bodhisattva is shown seated with his legs crossed, his head and eyelids slightly lowered in a contemplative gaze, which captures his inner tranquillity and spiritual peace. The figure was covered overall in a thick layer of gilt lacquer, which is still visible in places, providing a glimpse of its original splendour.

Stylistically this figure follows in the sculptural tradition of the Yuan dynasty (1279-1368), when Tibetan Buddhism became the court religion. The Mongol court intensified political, religious and artistic contacts with Tibet, which resulted in the emergence of a new style of Buddhist art. With the founding of the Ming dynasty, Tibetan-Buddhist sculptures continued to exert a strong influence, and under the patronage of the Yongle Emperor (r. 1403-1424), Tibetan and Nepalese artisans were employed in Beijing to furnish the halls and palaces in the newly-established capital. By the 16th and 17th centuries, Buddhist gilt-bronze figures gradually moved away from Tibetan models and began to depict Avalokitesvara with feminine features. This piece appears to represent an intermediary stage between these two sculptural traditions; the figure’s well-defined waist and bare chest adorned with beaded jewellery recall the gilt-bronze sculptures of the early 15th century, while the slightly stiff pose, small lips and upturned chin, as well as its floral earrings and crown are precursors of late Ming dynasty sculptures.

Avalokitesvara is the most popular bodhisattva in Mahayana Buddhism, and is known in China as Guanyin, short for Guanshiyin (The one who perceives the sounds of the word). As the earthly manifestation of Amitabha Buddha, his crown features an image of a meditating Amithaba. Guanyin is described in Chapter 25 of the Lotus Sutra, first translated in Chinese in AD 286, where the bodhisattva is referred to as Lokesvara (Lord of all beings) and Lokenath (Lord and protector of all beings). In this text, Buddha describes Guanyin as the one who compassionately provides release and deliverance to all those that suffer, characteristics embodied in this figure through its hand gesture: the varadamudra expresses the deity’s compassion and devotion to the salvation of all sentient beings, while the abhayamudra symbolises protection and peace.

Such large figures of the bodhisattva Avalokitesvara are unusual, and no closely related example appears to have been published. Compare gilt-bronze figures of bodhisattvas attributed to the 16th and 17th century, such as two slightly smaller examples sold at Christie’s Hong Kong, the first, 30th/31st October 1994, lot 394 (one of two figures), and the second, 30th April 1995, lot 606. See also a larger gilt-bronze figure, attributed to the 15th century, offered in our Hong Kong rooms, 8th October 2009, lot 1725.