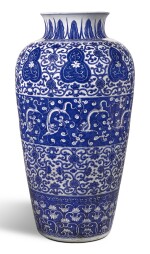 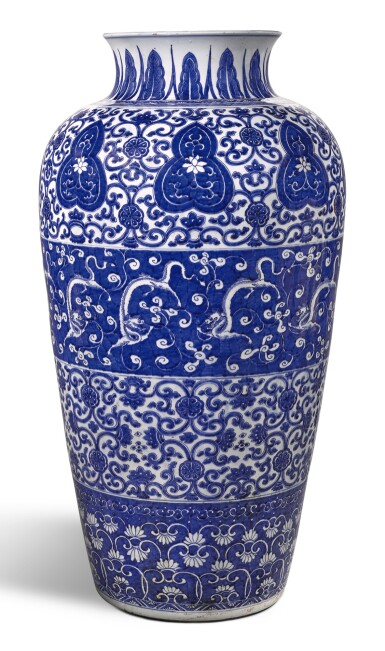 of tall tapered baluster shape, with rounded shoulders sweeping to a waisted neck and a flaring rim, richly painted to the exterior in vivid tones of blue with a central band of writhing chilong traversing amidst lingzhi in reserve on a blue ground, between bands of lotus scrollwork with a border of upright plantain leaves at the neck and stylised scrolling lotuses around the foot

This large and impressive vase is in very good condition with the exception of a 5x3mm., rim glaze flake, light rim fritting and minor glaze firing imperfections and glaze scratches.

Grand and powerful, this vase is notable for its large size and dynamic design, which required great technical skills during all stages of the manufacturing process. Monumental jars and vases of this type are often referred to as soldier or dragoon vases after an event in 1717, when Augustus the Strong (1670-1733), King of Poland and Elector of Saxony and inveterate porcelain collector, traded a regiment of 600 soldiers for a group of porcelain including several blue and white Kangxi period vases of this monumental size. Those vases came from the collection of Friedrich Wilhelm I of Prussia and had been housed within his own porcelain collection at Schloss Oranienburg.