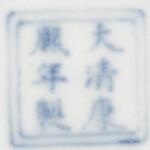 the rounded sides rising to a subtly flared rim, elegantly enamelled to the exterior with a leafy sprig of bright yellow asters, accompanied by three butterflies detailed with various colours and patterns, the countersunk base inscribed in underglaze blue with a six-character reign mark within a double square

There is a restored triangular rim crack (ca. 4.2 cm long) with a further hairline running vertically in the middle (ca. 2.5 cm).

This cup is a fine example of the developments in painting during the early Qing dynasty, where wash and colour were beginning to be emphasised over line. Known as the 'boneless style', this painting technique is characterised by the virtual lack of outlines. The only lines in the entire composition are those rendering the veins on the leaves and wings of the butterflies. This technique was rarely used on porcelain. For further examples of butterfly and flower decorated cups employing the 'boneless style', see a pair with a Kangxi reign mark and of the period, sold in our New York rooms, 8th May 1980, lot 249; and an example of Yongzheng mark and period, from the J.M. Hu Family Collection, sold in these rooms, 11th April 2008, lot 2832.

Cups decorated with this particular design are rare. Compare with a closely related example in the Shanghai Museum, Shanghai, illustrated in Kangxi Porcelain Wares from the Shanghai Museum Collection, Hong Kong, 1998, pls. 93.1-3; and another sold in our London rooms, 9th June 2004, lot 216. A cup of the same size and design from the collection of Iver Munthe Daae, possible the pair to the present cup, was sold in Sotheby's Hong Kong, 7th October 2015, lot 3636.