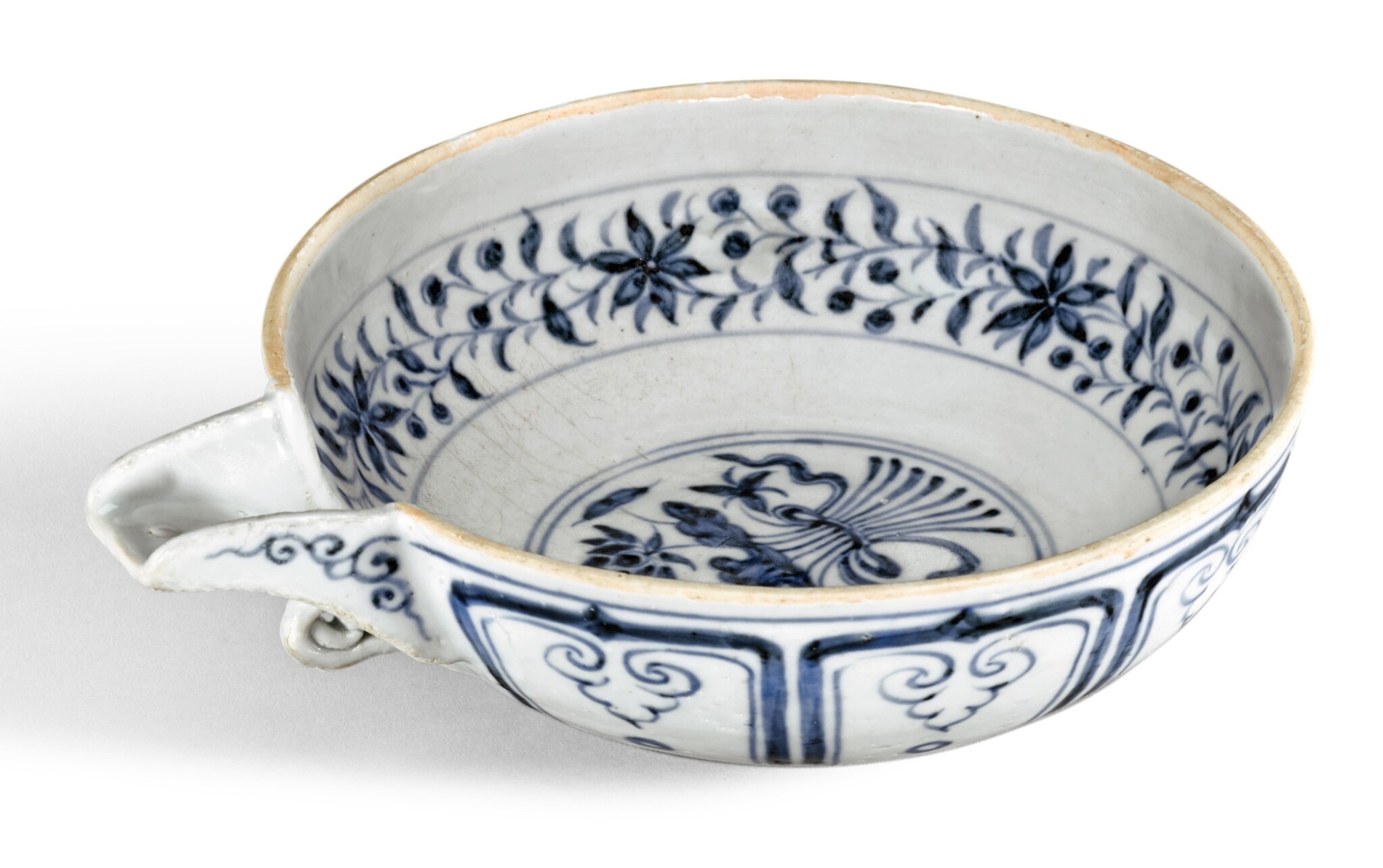 the rounded sides resting on a slightly concave base, one side set with an outward flaring spout above a small loop handle, the interior painted with a central medallion enclosing a lotus bouquet, surrounded by a floral scroll on the cavetto, the exterior encircled with lotus lappets, the rim and base unglazed

There are some fritting to the underside of the spout and supporting bracket. The glaze overall is slightly matt and abraded and has some scratches and surface wear overall, as well as minor firing imperfections such as firing cracks and burst bubbles.

Known as yi, bowls of this form appears to have been used as pouring vessels together with yuhuchun vases. Chiumei Ho in ‘Social Life Under the Mongols as Seen in Ceramics’, Transactions of the Oriental Ceramic Society, vol. 59, 1994-95, p. 44, notes that in archaeological contexts they are often found together with such vases and wine cups. This pairing is also depicted in a wall painting from the tomb of Zhang Andabuhua and his wife, which has been dated to 1269 A.D., and is illustrated in the catalogue to the exhibition The World of Khubilai Khan. Chinese Art in the Yuan Dynasty, The Metropolitan Museum of Art, New York, 2010, p. 83, fig. 115.

Bowls of this form were probably inspired by metal prototypes, such as the silver pouring bowl excavated together with a yuhuchun ping from a hoard in Hefei, Anhui province, illustrated ibid., p. 287, figs 330 and 331. These bowls were also used also by Mongols in Iran, as exemplified by the bowl painted in the Enthronement Scene, part of the album Jami al-tavarikh (Compendium of Chronicles), which was commissioned between the reigns of Ghazan (r. 1295-1304) and his brother, Öljeitü (r. 1304-1316), included in the exhibition The Legacy of Genghis Khan. Courtly Art and Culture in Western Asia, (1256-1353), The Metropolitan Museum of Art, New York, 2002, cat. no. 19, fig. 84. The shape was probably copied from metal prototypes and a very similar silver pouring bowl was found together with a silver yuhuchun ping in a hoard at Hefei, Anhui province, which contained items inscribed with a name written in Phagspa characters as well as a date equivalent to 1333, both now in the Anhui Museum Provincial Museum, published in the exhibition catalogue The World of Kublilai Khan. Chinese Art in the Yuan Dynasty, The Metropolitan Museum of Art, New York, 2010, p. 83, fig. 115