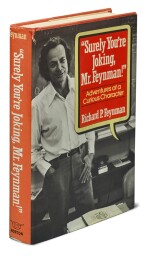 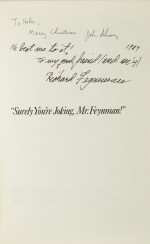 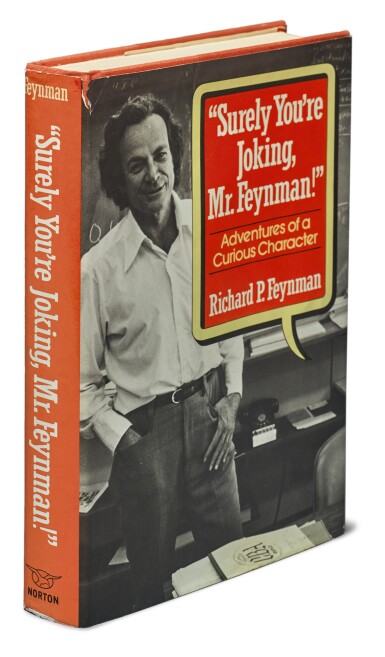 Octavo. Publisher's half orange cloth lettered in gilt, orange boards, plain wove endpapers unmarked, all edges trimmed and plain as issued. In the original pictorial dust-jacket priced $16.95, two blurbs on the lower panel; some slight wear to jacket. A very good copy, housed in a custom clamshell. SIGNED & INSCRIBED ON HALF TITLE: "TO HELEN, MERRY CHRISTMAS. JOHN SCHWARZ", AND "1984. HE BEAT ME TO IT! TO MY GOOD FRIEND (AND SEC'Y). RICHARD FEYNMAN."

FIRST EDITION, AN OUTSTANDING PRESENTATION COPY INSCRIBED TWICE TO FEYNMAN'S "BELOVED SECRETARY" HELEN TUCK, first by Feynman's colleague, theoretical Physicist John Henry Schwarz, and then by Feynman. Schwarz, who is currently the Harold Brown Professor of Theoretical Physics at the California Institute of Technology (CalTech), First edition, double inscribed, by Feynman & John Schwarz), is widely regarded as one of the founders of string theory.

An excellent memoir of the "Rock Star" of physics, Surely You're Joking Mr. Feynman was edited from taped conversations that Feynman had with his close friend and drumming partner Ralph Leighton. Feynman was notorious for refusing to sign copies of his book, reportedly telling his editor "I'm not going to go on TV and I'm not going to sign any books!" - signed copies are thus rare.

"Richard Feynman, winner of the Nobel prize in physics in 1965, is one of the world's greatest theoretical physicists. As any reader of this book will discover, he is also a man who has fallen, often jumped, into adventure. Feynman's life has in fact been a series of combustible combinations, improbable happenings made possible by his unique mixture of high intelligence, unlimited curiosity, eternal skepticism, and raging chutzpah. Feynman is perhaps the only person in the history of the world to solve the mystery of liquid helium and to be commissioned to paint a naked (female) toreador, to crack many of the most 'secure' safes at Los Alamos during development of the atomic bomb and to play a skillful frigideira in a Brazilian samba band, to explain physics to 'monster minds' like Einstein, Von Neumann, and Pauli, and to accompany ballet on the bongo drums, to be judged both mentally deficient by a United States Army psychiatrist and worth of the Nobel Prize by the Swedish Academy..." (Book jacket).