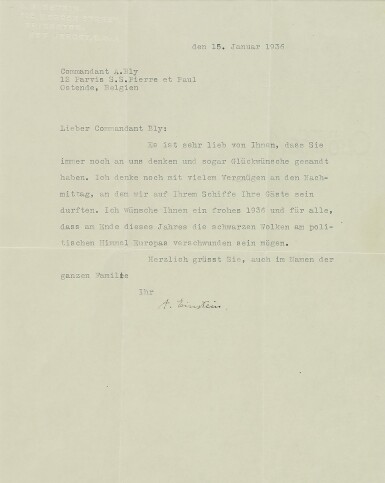 EINSTEIN, ALBERT | TLS TO COMMANDANT A. BLY, COMMENTING ON THE POLITICAL SITUATION IN EUROPE, 1 P, 15 JANUARY, 1936.

EINSTEIN, ALBERT | TLS TO COMMANDANT A. BLY, COMMENTING ON THE POLITICAL SITUATION IN EUROPE, 1 P, 15 JANUARY, 1936.

1 page (approximately 11 x 8 ½ in.) signed "A. Einstein" in German, on blindstamped letterhead stationery; old folds. With black and white photograph (approximately 6 ⅜ x 4 ½ in.). Letter and photograph matted, framed, and glazed together.

"IT IS VERY KIND THAT YOU STILL THINK OF US AND EVEN SEND CONGRATULATIONS. I RECALL WITH PLEASURE THE AFTERNOON WHEN WE WERE ALLOWED TO BE YOUR GUESTS ON YOUR SHIP. I WISH FOR YOU A HAPPY 1936 AND FOR EVERYBODY, THAT BY THE END OF THIS YEAR, THE DARK CLOUDS IN THE POLITICAL SKY OF EUROPE MAY DISAPPEAR."

Einstein was visiting the United States when Hitler rose to power in 1933, and did not return to Germany, where he held the post of professor at the Berlin Academy of Sciences. He instead took up the position at the Institute of Advanced Studies in Princeton, New Jersey, where Einstein would remain for the rest of his life.