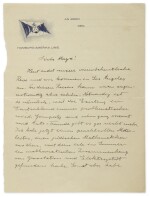 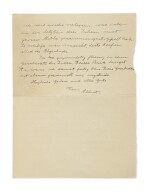 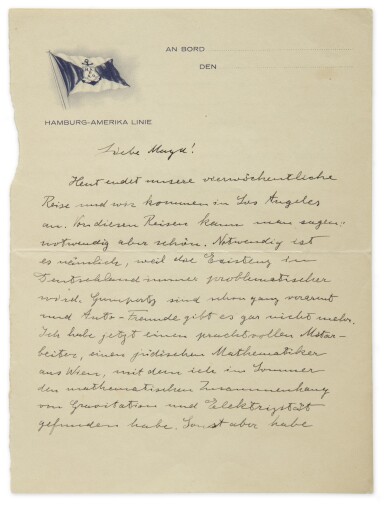 EINSTEIN PROCLAIMS THE SUCCESS OF HIS UNIFIED FIELD THEORY

“I FOUND THE MATHEMATICAL CORRELATION OF GRAVITATION AND ELECTRICITY” – EINSTEIN PROCLAIMS THE SUCCESS OF HIS UNIFIED FIELD THEORY.

Writing from Los Angeles as he disembarks from his boat for his second visit to Cal Tech, Einstein communicates his confidence and inner thoughts about his most recent work on "The Unified Field Theory of Gravity and Electricity" (published in 2 parts in 1931: Weil *182 and *185). Written in collaboration with mathematician Walther Meyer, this theory and work is deemed one of Einstein’s major scientific achievements. The theory presented a new formalism in which the fifth dimension was no longer an “extension of the physical continuum”. “The new mathematics presented by Einstein and Mayer in [these] two papers does not involve the embedding of the Riemann manifold R4 in a five-space. Instead, a five-dimensional vector space M5 is associated with each point of R4 and the local Minkowski space (call it M4) is embedded in the local M5, which has (4+1)-metric.” (Pais, 334)

Einstein here announces that over the summer (1931) "[Trans:] I found the mathematical correlation of gravitation and electricity." In order to reach this new breakthrough, Einstein says "I had to drop a great deal of what I had patched together with great pains over the last three years"; and in commenting generally on the problematic of Unified Field Theory, Einstein avers that "The more closely one looks, the deeper are the abysses." Having begun the letter by declaring that "life in Germany is becoming ever more problematic," Einstein concludes in stating that he is reading a history of the Jews, which he finds "as horrible as it is mysterious."

Einstein collaborated with Walther Meyer for seven years (1929-1936), coauthoring papers with him on Unified Field Theory, quantum mechanics, and mathematical topics (vectors and spinors); the UFT papers referenced in this letter are Meyer’s most important scientific contribution. Nicknamed “Einstein’s calculator,” Meyer is here praised by Einstein as “a splendid collaborator.” Meyer also worked independently in pure mathematics, and most notably in the field of topology; he joined the Institute for Advanced Study in 1933. The confidence and pride Einstein expresses in his new theory is echoed in another letter he wrote to his old friend and colleague Ehrenfest: this new approach, Einstein wrote, “in my opinion definitely solves the problem in the macroscopic domain”