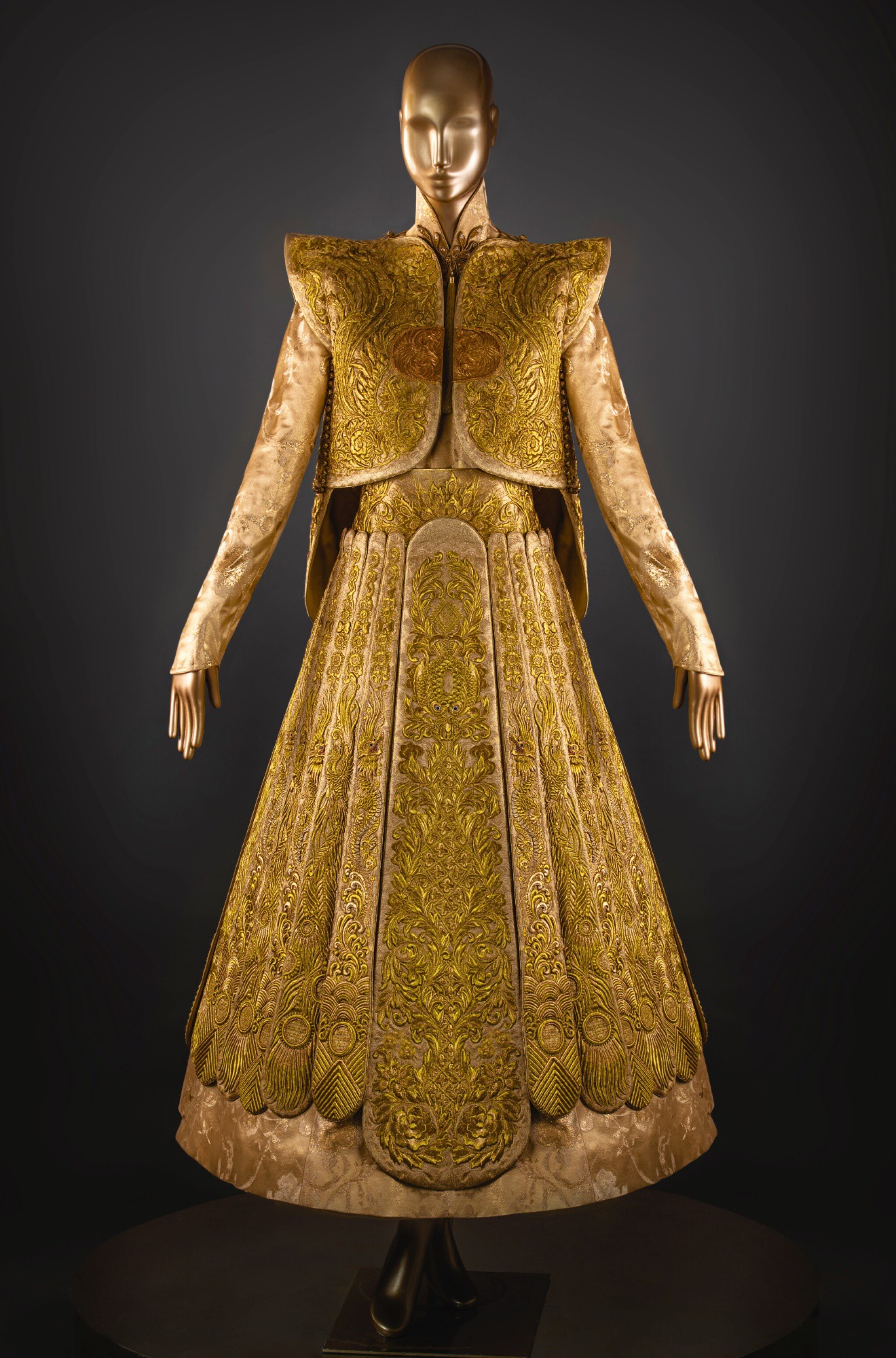 Chinese’s most renowned couturier Guo Pei burst onto the international stage when singer Rihanna wore one of her exquisite golden designs to the Met Gala in 2015. Her love of the colour gold was shaped by her upbringing in Beijing. A modern messenger of her cultural heritage, Guo Pei has breathed new life into embroidery and painting traditions that date back thousands of years over the course of her 30-year career. Her elaborate designs showcase the finest of traditional Chinese craftsmanship while incorporating contemporary innovation and Western style. The rich colours of gold and yellow, which used to be reserved for the emperor during the Qing dynasty, are a signature design element of Guo Pei’s creations, including the present dress.

Guo Pei’s artworks are inspired by fairy tales, legends and even military history, with every creation telling a story which brings beauty, romance and the designer’s imagination to life. Fabrics, shapes and textures become a canvas to reimagine the tales which paintings have conveyed throughout the centuries.

The design of this dress was inspired by Singapore's Peranakan culture and traditional costumes, while also incorporating contemporary elements. Guo Pei hopes to pass down the exquisite art of traditional embroidery - a technique widely employed in the creation of this piece.

This wedding dress, which took five years to completion, is hand sewn with gold thread in-laid with the precious metal and is a true collector's piece from Guo Pei's collection. The designer employed about 30 techniques of stiches adapted from all over the world to create this piece, forming a threedimensional effect through embroidering over sheepskin, thus giving the fabric different heights.

The dress shows an intricate pattern and details including the use of “Double Fish”. Fish are "Yu" in Chinese, a homonym of "Yu" (余）which means "in excess of". "Yu" is also phonetically similar to "Jade". When combined, it expresses the blessing of "Jinyu Mantang", a beautiful expression used to bless a couple about to be wed. The dress details also reveals auspicious clouds which convey harmony and embody a significant symbol for marital bliss in the Chinese culture. Gourds are also included within the pattern, which is phonetically similar to "Fu Lu" in Chinese which is symbolic to represent wealth and good fortune. Additionally many peonies are seen on the garment. Peonies are regarded by the Chinese as a symbol of wealth, auspiciousness, happiness and prosperity. A beautifully knotted bow is used to represent the beautiful love of the couple to be married, entwined in

happiness. Finally, the pattern detail includes the image of the Dragon and Phoenix which represents the undisputed “match made in heaven” in Chinese culture and mythology.