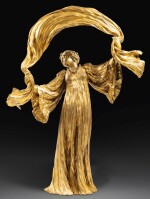 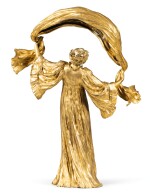 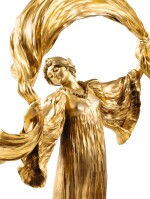 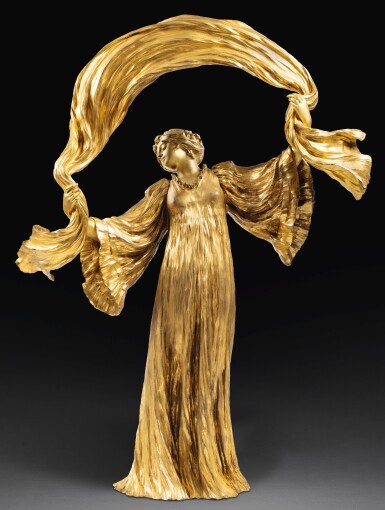 Overall the condition of the bronze is very good with minor dirt and wear to the surface consistent with age. There is very minor wear and a few minor dark marks to the patina.

"In response to your inquiry, we are pleased to provide you with a general report of the condition of the property described above. Since we are not professional conservators or restorers, we urge you to consult with a restorer or conservator of your choice who will be better able to provide a detailed, professional report. Prospective buyers should inspect each lot to satisfy themselves as to condition and must understand that any statement made by Sotheby's is merely a subjective, qualified opinion. Prospective buyers should also refer to any Important Notices regarding this sale, which are printed in the Sale Catalogue.﻿

This finely chased figure in an elaborately draped dress is part of a series of dancers, the Jeu de l'Écharpe, conceived by Agathon Léonard, first exhibited at the Société Nationale des Beaux Art in 1897 as a project for a theatre foyer. The dancers in elegant poses are all characterised by their delicate gestures, loose dresses and wide sleeves. They rapidly became Léonard's most popular works, and were produced in gilt bronze by the Susse foundry. The present bronze is a particularly fine Susse edition of the Daseuse à l'écharpe (pieds invisibles), which was only edited in the present large size, showing a carefully chased surface in the bronze to produce a shimmer-effect of light on the gilding.

Agathon Léonard, born to Belgian parents as Léonard Agathon van Weydeveldt, studied in his hometown Lille under Delaplanche before settling in Paris, first exhibiting at the Salon there in 1868. He had a successful career, exhibiting regularly in Paris until 1914 and serving as part of the jury for the Société Nationale des Beaux-Arts. He became particularly known for his small subjects representative of the Art Nouveau. His most successful works, the various figures of the Jeu de l'Écharpe, were not only offered to the Empress of Russia as a table centrepiece, but also became bestselling figurines in porcelain, cast by the Sèvres factory.